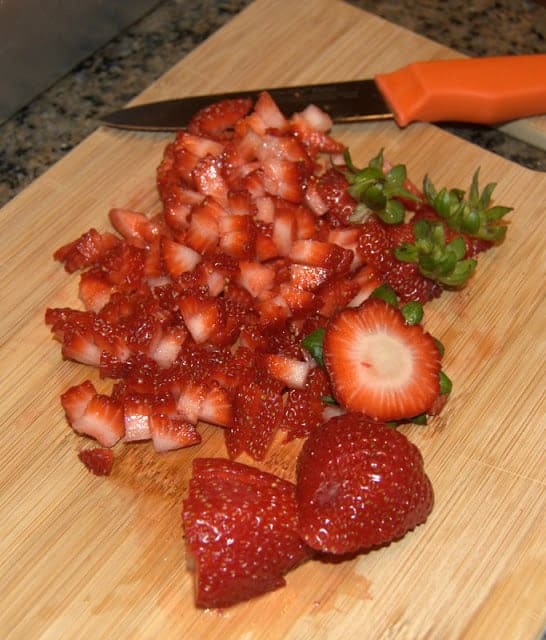 *For those of you who have already read this post sans pictures, I admit I had a brain fart and titled this bread incorrectly. I don’t know why I called it “marbled”, it should have been called Chocolate Strawberry bread. I left one of the most important parts out. I had a dream about it last night which is why I need to change it.
How many of you other bloggers have dreams about your posts or the food you photograph. I’m sure I’m not alone! Enjoy the pictures. Sorry for the delay.* 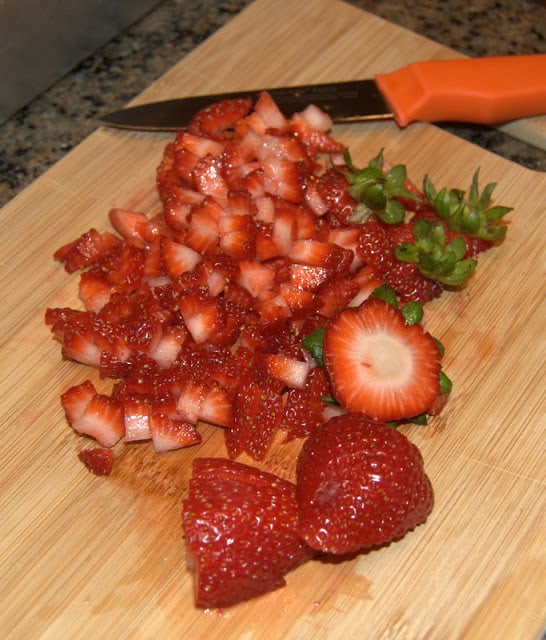 It’s 10:32 pm and the bread should be done in about 25 minutes.
It’s been a VERY full day.
I like to be productive, but I also like time to chill during those productive days and just be able to sit a spell.
So, here I am. Finally.
It started this morning with a major grocery shopping where I was able to save 56%. It was very exciting, but not as low as I had hoped it would be. The total came to $202.49 before my shopper’s card and coupons discounts and after they were applied the total was $87.75.
It was good, but I want it to be better.
I don’t need it to be as good as those savings on ‘Extreme Couponing’, but I would like to see a savings of 90% on a receipt.
It’s my goal. I’ll get there.
I also spent at least 2½ hours preparing 40 lbs. of boneless, skinless chicken breasts to be frozen. I picked up our bulk order and that’s what I spent a good part of the afternoon doing. That is a heck of a lot of chicken, but now it’s tucked nicely away in our freezer and should last us about 6 months.
What else do you want to hear about my day? Haha  😉
Strawberries were on sale again today. Woo Hoo!
And I like love chocolate, so during dinner I decided that I’d make some strawberry bread swirled with semi-sweet chocolate.
Of course, strawberries and chocolate go together!
It’s like Romeo and Juliet, Antony and Cleopatra, me and Mr. 365 – it’s a wonderful marriage!

Let’s just say I melted a little too much chocolate than I wanted to use and had a bunch of extra strawberries (’cause they were on sale remember).
Then I had this BRILLIANT idea as I was cleaning up the kitchen after the bread went into the oven that I should have…
strawberries dipped in chocolate.

I was also inspired to make this bread from  Joy the Baker. She made Brown Butter Banana Strawberry Bread last week and it looked delicious. I love her blog. Her writing is wonderful and she is just so real. She’s very funny, too. I check in on her daily. 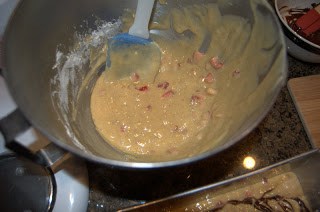 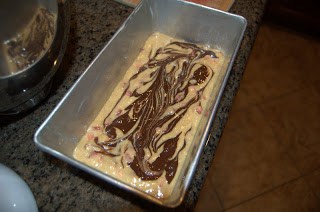 Cover with remaining batter and chocolate. Swirl chocolate through batter. 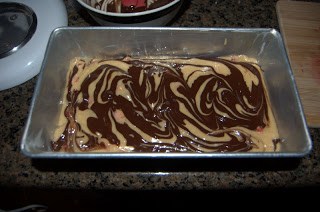 Place thinly sliced strawberries on top.
Bake for 50-60 minutes until knife in center comes out with clean (except for melted chocolate). 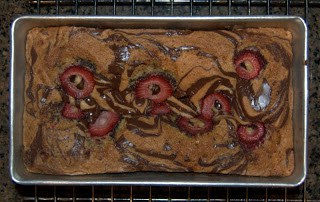 Cool on wire rack for 15 minutes.
Remove from pan and cool completely on rack. 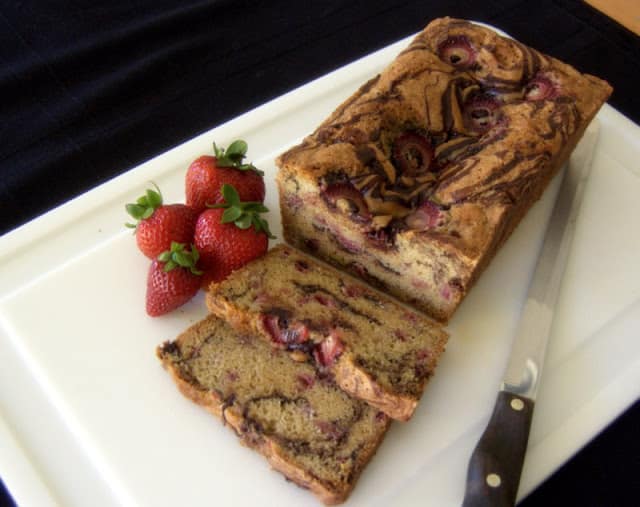 Can I tell you that I am so bummed that I am SO doggone impatient!!
The bread fell because I opened the oven to “peek” at it.
Isn’t that why the oven door was made with a WINDOW, so people like me wouldn’t ruin what was inside??!!
How aggravating. I do that with cupcakes, too. You’d think by now I would have learned. Unh-unh.
It just came out of the oven, so I think I’ll have to rate it in the morning. I don’t want to cut it before it’s completely cooled.
The suspense….
Gee, no pictures, no rating, no end result.
I’ll tell you it looks pretty even though the middle is a little sunken, but you’ll see that in the pictures.
I’ll taste it in the morning and let you know. You’ll just have to come back a little later to see.
Please do.
I love you.
Sleep well.
Dream of strawberries and chocolate. Although most of you are already asleep.
The next day…
Good morning/afternoon or night wherever you may be!
The bread was good. I really like the chocolate combination with the strawberries. I do think that I added ¼ teaspoon too much of cinnamon, so next time I would change it to read just ¼ teaspoon. I think it detracted from the taste of the strawberries.
Everything at 365 is rated on a scale of 1-4 with 4 being the best and this Chocolate Strawberry Bread earned a 3 rolling pin rating.
Happy baking!