This Easy Cinnamon Roll Cake Recipe is delicious as a breakfast cake or a dessert pizza. Turn a can of cinnamon rolls into a sweet, ooey-gooey cake with a sweet glaze for this easy recipe!

The hardest part of today’s cinnamon roll cake recipe is deciding. Is it breakfast? Or is it dessert?

This delicious Cinnamon Roll Cake is both.

SAVE THIS EASY CINNAMON ROLL COFFEE CAKE RECIPE TO YOUR FAVORITE PINTEREST BOARD!

Made from cinnamon rolls, this is an easy cake recipe you can justify serving for breakfast AND / OR dessert. It’s all the gooey sweet fluffy taste you love in cinnamon rolls, baked into a sliceable breakfast cake!

The best part, is that it’s such a great recipe. So you have my full permission to eat this cake ANY time of day! It will pair perfectly with a cup of coffee or glass or orange juice, too.

Of course if you don’t prefer doings the easy way and want “the real thing” meaning made from scratch, then by all means make my Homemade Cinnamon Rolls for breakfast. That cinnamon filling and vanilla cream cheese frosting will seriously make you swoon.

OR, make my homemade Cinnamon Roll Layer Cake with cinnamon cake layers, a cinnamon brown sugar mixture and a delicious buttercream for dessert.

To make this cinnamon cake, you will need the following ingredients:

For the simple glaze, you will need these ingredients:

Do I serve it for breakfast or dessert?

When it comes to cinnamon roll cake, the only thing I can advise: follow your heart.

Okay, but really! This cake uses cinnamon rolls which are a favorite breakfast treat and typically considered a breakfast food. But it’s sweet, frosted and is cinnamon swirl CAKE!

So, that means you can’t go wrong no matter what.

I think it’s an ideal addition to a brunch table, along with a few savory options like this Meat Lover’s Pizza Frittata or a Denver Scrambled Breakfast Braid.

No one will turn this down as a dessert either. Serve it as it is, or go extra decadent and add a scoop of vanilla ice cream.

Just be prepared for everyone to ask how you made it. . . and watch how surprised they’ll be when you tell them how easy it is! Share it with them, and it’s sure to become one of their favorite recipes, too!

Does the brand of cinnamon rolls matter for this recipe?

I have only used the Pillsbury refrigerated cinnamon rolls(the 8 roll, 351 gram tubes) for this recipe and they work perfectly.

How do I store this cinnamon roll cake?

The frosted cake can be stored in an air tight container in the fridge for up to 4 days. Cinnamon cake without the cream cheese glaze is safe to keep at room temperature in a sealed container for about 3 days.

It’s important that since the frosting contains cream cheese, that you keep it refrigerated when you’re not eating it!

My family has never found it difficult to eat a whole pan of cinnamon roll cake in a short time frame and, once you taste it, you’ll know what I mean.

Anyone who knows me will not be surprised to hear that I have an affinity for breakfast cakes. I’m a baker, after all!

If you love cinnamon cakes, this Cinnamon Sour Cream Coffee Cake is an absolute must try recipe. Super moist, sweet and bursting with warm cinnamon flavor, it’s just what I want with my morning coffee.

When I’m not eating cake for breakfast, I’m eating it. . . well, any other time of day.

You’ll love these other easy cake recipes I’ve baked and shared over the years!

Having dessert every day is nonnegotiable. Life is just better when you know there’s a sweet treat waiting for you at the end of the day. Or sometimes in the middle of the day!

Even as a person who bakes for a living, I don’t always have the energy or time to spend hours on an intricate dessert. That’s why I love finding, making and sharing the best EASY dessert recipes with you!

Once you make—and taste—today’s Cinnamon Roll Cake, you’ll understand why it’s one of my favorites.

Here are a few more amazing desserts to try that are just as easy as cake with the flavor of a cinnamon roll.

Scroll through all my easy dessert recipes to find the perfect sweet finish to any meal!

Crack open a can of cinnamon rolls to make this ooey-gooey breakfast cake. Cinnamon Roll Cake is delicious any time of day and is sure to become a family favorite! 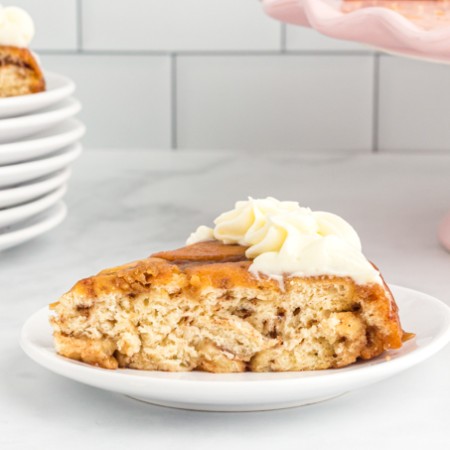 Course Dessert
Cuisine American
Prep Time 15 minutes
Cook Time 25 minutes
Total Time 40 minutes
Print
Pin
Rate
Save Saved!
8 people
This Easy Cinnamon Roll Cake Recipe is delicious as a breakfast cake or a dessert pizza. Turn a can of cinnamon rolls into a sweet, ooey-gooey cake with a sweet glaze for this easy recipe!
Prevent your screen from going dark