Assemble it the night before, then pop it in the oven the next morning for a hot, homemade breakfast.
It’s an easy breakfast recipe that’s perfect for Christmas morning, a holiday brunch or any special occasion. I’m sure mom would even love it for Mother’s Day!

Classic French toast was my son’s all time favorite breakfast when he was growing up and he still really loves it along with this Loaded Huevos Rancheros recipe.

SAVE THIS EASY OVERNIGHT FRENCH TOAST RECIPE TO YOUR FAVORITE PINTEREST BOARD!

But, you might be wondering: why bake French toast?

As a busy mom, I usually didn’t want to stand over the stove on a Saturday morning making individual slices of French toast. All the dredging and flipping seemed to take an eternity and by the time I could sit down to eat everyone else was long finished.

French Toast Casserole is baked in the oven instead! It has all the delicious flavor of classic cinnamon French toast, only with far less work. It’s an easy recipe and everybody gets to eat at the same time.

The best part about this baked cinnamon French toast recipe is that you can prep it the night before. That means so much less hassle in the morning.

Let it bake while you brew a pot of coffee and you’re ready for an amazing start to your day!

I use these ingredients to make overnight French toast.

What is the best bread to use for cinnamon French toast casserole?

A soft bread, like that store bought white loaf of bread called Wonderbread won’t work well in a baked French toast recipe because it will get soggy and soupy.

Slightly stale bread is better than fresh bread for perfect French toast texture. As it soaks up the milk mixture, it softens without getting soggy.

How do I make it?

Making French toast in the oven is even easier than making it on the stove.

From here you have two choices: you can bake the French toast it right away OR for the best results, let it chill overnight.

For overnight French toast, cover your baking dish tightly with foil or plastic wrap, and put it in the refrigerator. Store the topping mixture separately in a plastic bag or make it the morning of.

When you’re ready to bake French toast, sprinkle the cinnamon streusel topping over the casserole. Bake at 350° F for a cooking time of 45 – 60 minutes.

The longer you bake it the more “well done” the French toast will taste. For a softer consistency that’s similar to bread pudding, take it out of the oven closer to the 45 minute mark.

Serve with plenty of maple syrup or even some cream cheese icing for French toast heaven that the whole family will enjoy!

Once you find out how easy it is to make French Toast recipes in the oven, you’ll want to try ALL the variations!

We loved that blueberry version so much, I made it again with cream cheese! And I can’t mention berries without remembering how delicious this Almond Berry French Toast Casserole turned out.

For a breakfast casserole that doubles as dessert, this Easy Chocolate Croissant Baked French Toast is a clear winner. I mean, croissants and chocolate? I’m in.

With all of those French toast recipes on the site, you might assume that’s all I make! I promise you I have a ton of other impressive and easy breakfast recipes for you. Although my son would be pretty happy if French Toast WAS all I made!

From the savory to the sweet, these dishes are worth waking up for! 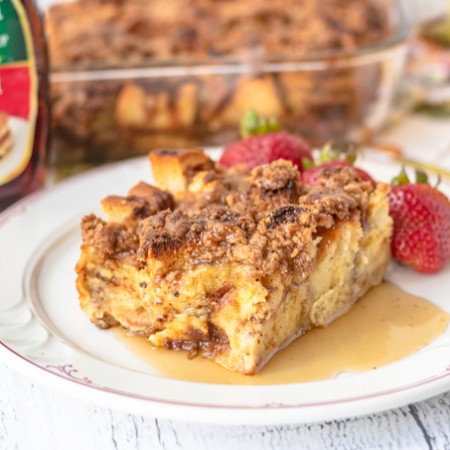 Course Breakfast
Cuisine American
Prep Time 15 minutes
Cook Time 1 hour
Total Time 9 hours 15 minutes
Print
Pin
Rate
Save Saved!
12 people
Baked Cinnamon French Toast is an easy and delicious french toast breakfast prepared the night before then baked with a cinnamon topping the next morning. It's a meal everyone will enjoy waking up to!
Prevent your screen from going dark