Cinnamon Crunch Cheesecake is packed with the decadent flavors of a cinn-a-bun! Topped with a crunchy cinnamon crumb and a drizzle of caramel, this easy cheesecake recipe delivers crowd pleasing results!

Who among us can resist the aroma of a fresh baked cinnamon roll?

I use cinnamon buns as my inspiration for all kinds of recipes. Remember this Cinnamon Roll Layer Cake and these Cinnamon Roll Muffins?
Today, we’re bringing all of that cinnamon sugar goodness to another classic dessert: Cheesecake!

SAVE THIS CINNAMON ROLL CHEESECAKE RECIPE TO YOUR FAVORITE PINTEREST BOARD!

This Cinnamon Crunch Cheesecake takes an easy cheesecake base and packs it with cinnamon roll flavor. To make the cinnamon roll cheesecake even more indulgent, I added a luscious swirl of caramel on top.

If you’re looking for a dessert to make jaws drop, this cinnamon cheesecake is just the ticket!

For the cheesecake crust, you will need:

And for finishing touch:

What kind of cookies are best in this cheesecake crust?

How do you store this cinnamon cheesecake?

Cinnamon Crunch Cheesecake should be stored covered in the refrigerator. It tastes best served cold, straight from the fridge!

Can I make this cinnamon crunch cheesecake as bars instead?

Yes, this recipe works as cheesecake bars too! Just add the crust and filling to a square or rectangular baking dish instead.

Once cooled and chilled, slice into squares and serve!

Fun fact: this was the first cheesecake recipe I ever made back in the early days of this blog!

After that first cheesecake endeavor, I branched out to explore the wide world of cheesecake flavors! Check out these other beginner-friendly cheesecake recipes next.

Cinnamon lovers, you’ve come to the right place. Make your house smell amazing by baking up some of these cinnamon-sugar packed treats. 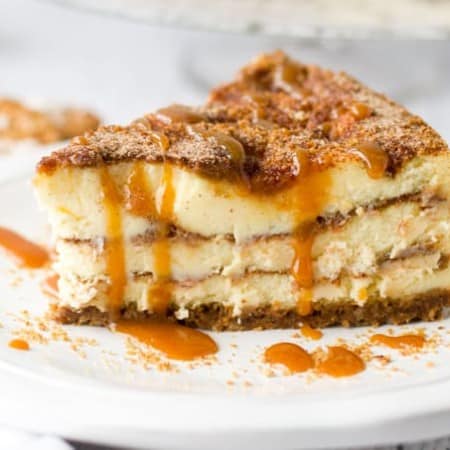