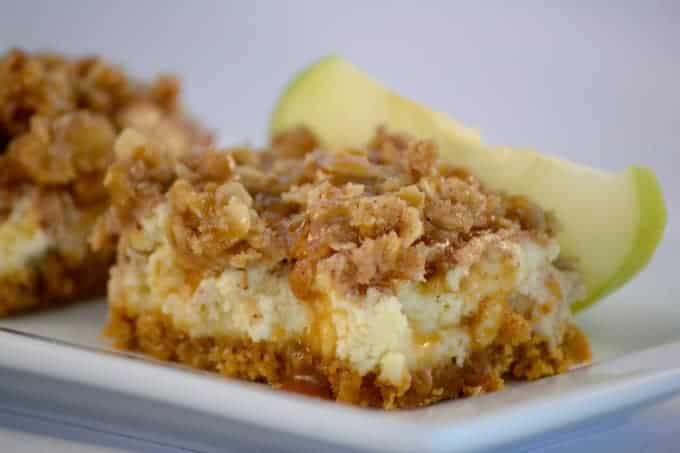 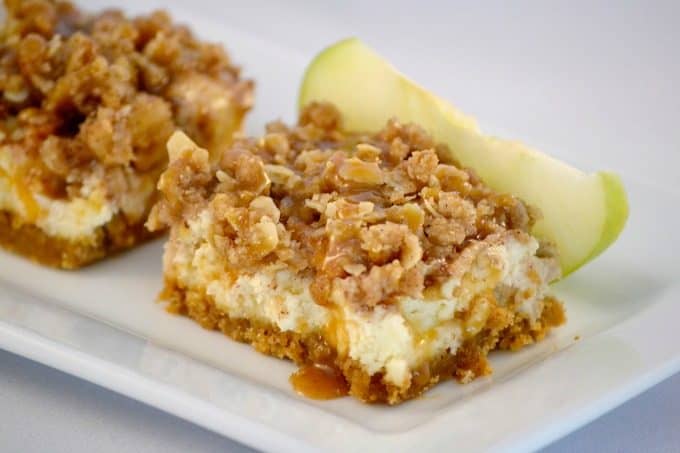 I know it’s not fall yet, but I’ve been wanting these bars. All the best parts of an apple crisp and a cheesecake put together in a bar and drizzled with caramel create my idea of a perfect fall treat.

Honestly, though, you can eat these bars all year long – they’re THAT good! I’ve never known anyone to turn down a Caramel Apple Cheesecake bar, no matter what the calendar says. Which is why I not only made the bars this week but I’m republishing the post for you, too. 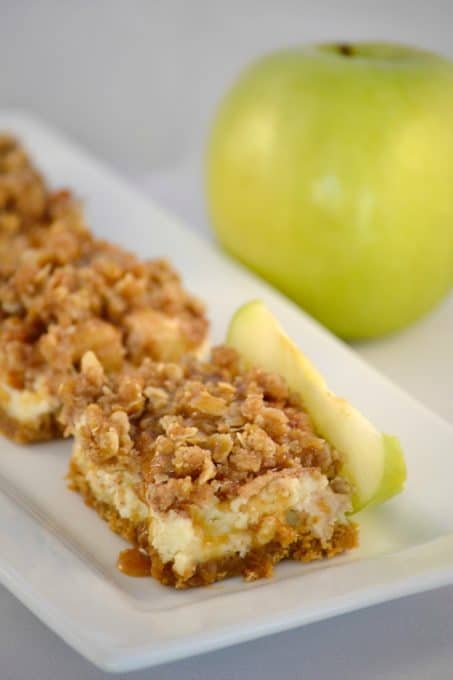 Everyone needs these cheesecake bars in their life! Rich buttery caramel over tart apples with a cheesecake base and a cinnamon topping? Sign me up.
I originally made these as part of the Secret Recipe Club project but they’ve become an all time favorite. The original post is included below.

It’s that time again!!! Time for our monthly Secret Recipe Club reveal!! So exciting!! The Secret Recipe Club was started by none other than Amanda of Amanda’s Cookin’. And our wonderful hostess of group C is Angela of Big Bear’s Wife.
The Secret Recipe Club is like Secret Santa. Each blogger is assigned another blog in their group and we then choose a recipe to make and share. It’s awesome because we are able to make new friends and try wonderful new recipes! But the best part is that we are not supposed to tell the blogger that we are secretly stalking them until we share our recipes with everyone on reveal day. 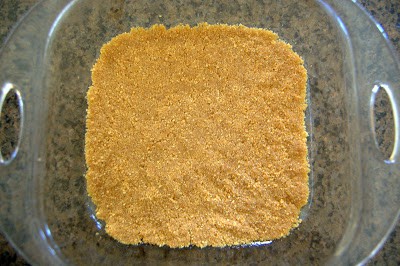 It’s so exciting!
We took the month of January off, which was probably a good thing so that we could all get back to a sense of normalcy from the holidays. And now the month of February is upon us and today is Group C’s (my group) reveal.
Drum roll, please . . . 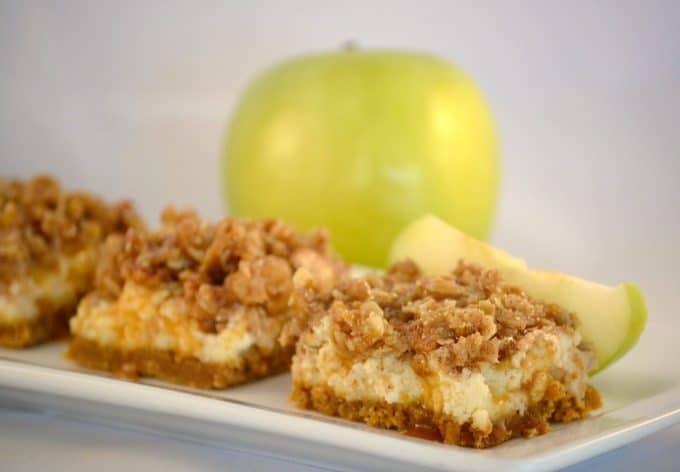 I present to you…Delicious Existence!!

This blog was started by Danielle, who is a Health Coach and Lifestyle Motivator. I really like what she says about our lifestyle and diet and I believe it to be very true,

“Ditch your diet. End your obsession with calories and fat grams. Don’t count another carb. Throw away those lists of “bad” and “good” foods. Stop restricting and you will start living. Focus on increasing your consumption of real food (fruits, vegetables, quality grains, complete proteins) and water and you will naturally decrease the amount of low nutrient processed foods you might be eating.”

I have done this in an effort to shed a few pounds before the 365 is over and I have to tell you that because I’ve been putting healthier foods into my body and have significantly cut back on the processed foods, I physically feel better and now when I do my stomach just doesn’t feel right.

For instance, ice cream, I used to have a pretty good size bowl of it before, but now a couple of spoonfuls will satisfy me. When I know I can have something whenever I want it, eating tons of it becomes less appealing. Wild, right?

SAVE THIS CARAMEL APPLE CHEESECAKE BAR RECIPE TO YOUR FAVORITE PINTEREST BOARD! 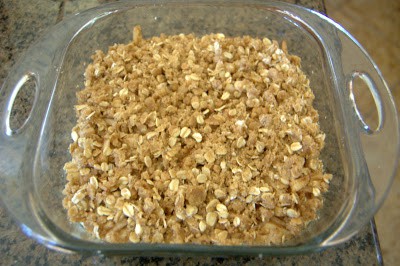 I NEVER thought THAT would happen! Of course, sometimes we all need a good size bowl of ice cream at the end of the day, and I love that Danielle acknowledges that that’s okay, too.

When I found out that Danielle was my blogger for the project this month, I went to her site and began to scroll looking for the perfect recipe. So many of them looked good that I was having a hard time deciding which Delicious Existence recipe to make.

Then, the Caramel Apple Cheesecake Bars caught my eye. I stopped scrolling; I’d found my recipe.

I am such a sucker for caramel apples. Whether I’m dipping slices of fresh apple into caramel sauce or eating one on a stick at a fall festival, this combination of flavors makes me extra happy.

Danielle’s recipe is for vegan caramel apple cheesecake bars but since I didn’t need a vegan version, I made some substitutions based on what I had in my pantry. Check out Danielle’s original if you’re after a dairy-free cheesecake bar recipe!

Instead of Namaste Biscuits, I used graham cracker crumbs and flour. I substituted regular granulated sugar for Turbinado sugar, butter for coconut oil, and used a real egg instead of the egg replacer.

Since I also didn’t have any pre-mixed apple pie spice, I used my own blend of cinnamon, nutmeg, and cloves in its place. 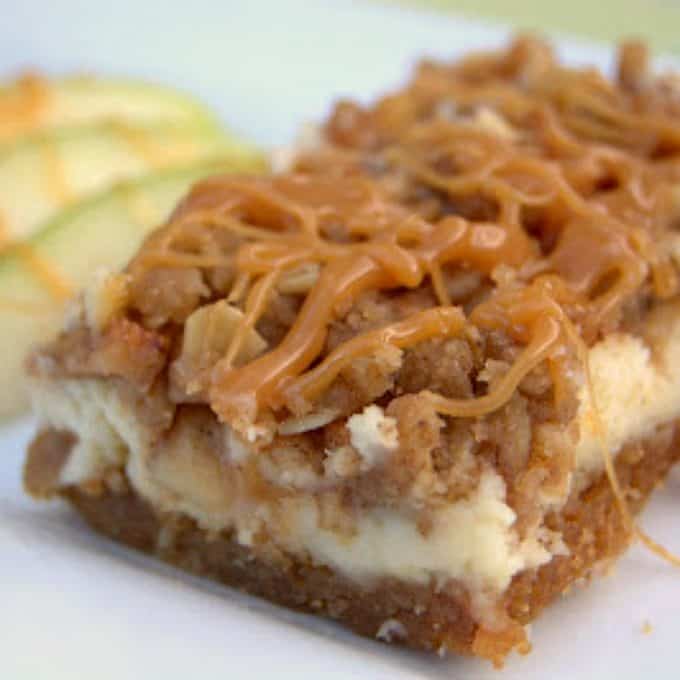 SIGN UP FOR THE 365 DAYS OF BAKING & MORE
WEEKLY NEWSLETTER BELOW!

Use these items to make your own Caramel Apple Cheesecake Bars – this baking dish, glass mixing bowls, and this offset spatula.

All it takes is mixing graham cracker crumbs with melted butter and a bit of brown sugar. Then you press the crust into your baking pan and you’re good to go!

These bars include an apple layer that’s reminiscent of an apple pie filling with tons of delicious smelling fall spices. It might be February outside, but my kitchen smelled like an autumn wonderland! 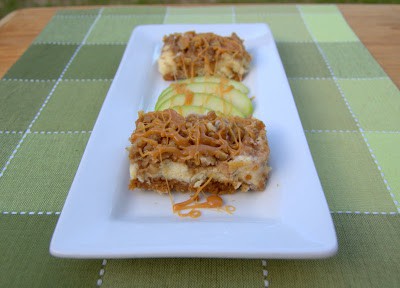 The cheesecake layer is made from an easy mixture of cream cheese, sugar, egg and vanilla. To finish up these apple cheesecake bars, you sprinkle the whole thing with a cinnamon streusel topping.

Wait! I almost forgot about the crucial final ingredient: the caramel drizzle.

An easy homemade caramel sauce made from melted caramel candies elevated these bars from apple pie cheesecake (delicious) to Caramel Apple Cheesecake (ULTRA delicious). You can easily substitute your favorite homemade or store bought caramel sauce for these bars, if you prefer.

*In the original post, I put the caramel sauce on before putting them into the refrigerator to set . This was a BAD idea, friends. The caramel hardened (of course!) and when I went to cut the bars I made a mess of them because the caramel was difficult to cut through, so I highly suggest you put it on right before serving.*

Once the bars were cooled, I served them with a few extra apple slices and the remaining extra caramel sauce for dipping. Don’t they look good? 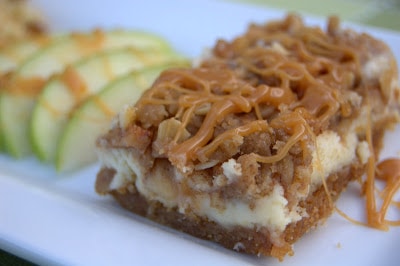 The Caramel Apple Cheesecake Bars taste even better than they look!

I rate everything I bake on a scale of 1-4 with 4 being the best and these Caramel Apple Cheesecake Bars earned 3 1/2 rolling pins. These were the best of caramel apples, apple crisp and cheesecake combined.

I had actually doubled the caramel sauce and realized I hadn’t needed so much, but it was quite delicious drizzled over the apple slices, too.

I’ll definitely be making these again soon. Our eldest daughter who is home from college for a few days just saw my post and is completely bummed she didn’t have any.

Come September and October, you can bet I’ll have a steady supply of these bars handy anytime I have company over (or anytime I’m craving them).

If you like these Caramel Apple Cheesecake Bars, you’ll enjoy these other caramel and apple recipes, too . . . 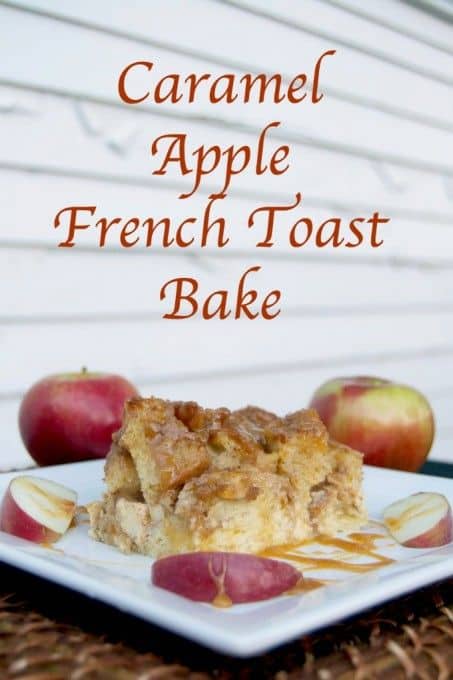 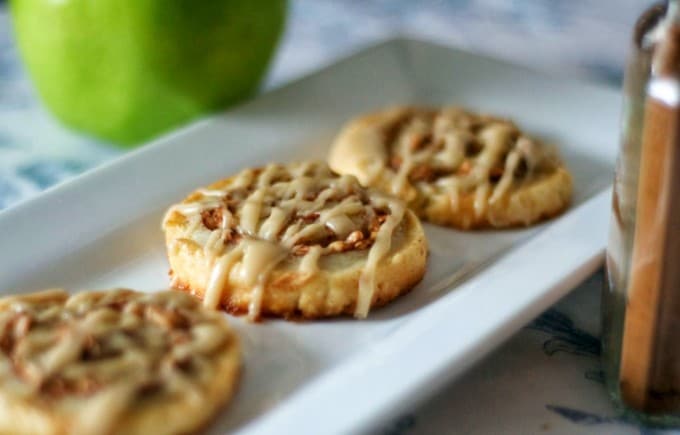 Inside Out Caramel Apples 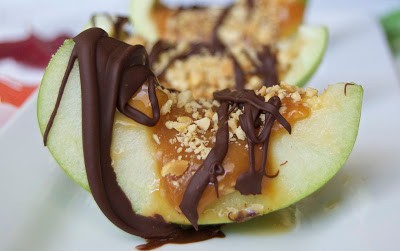 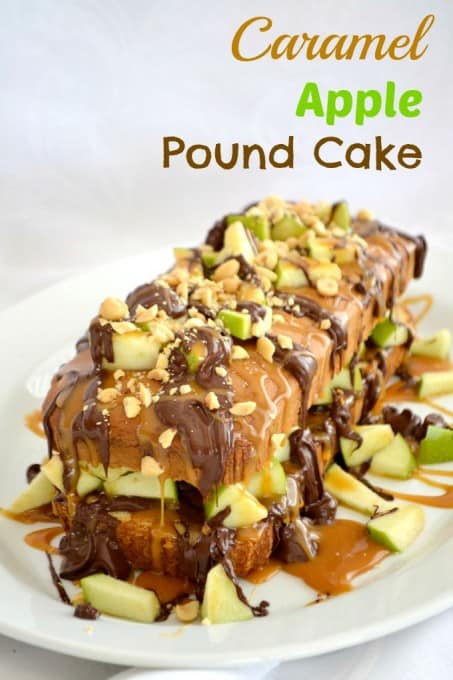