Welcome fall with this homemade Skillet Apple Crisp. Cinnamon spiced apples are cooked to buttery soft perfection and topped with a crunchy pecan streusel topping. Topped with vanilla ice cream or enjoyed on its own, it’s an easy apple dessert that’ll have everyone rushing back for seconds!

I have a thing for a really good apple crisp.

I guess you could say that I’ve actually always had a thing for apple crisp.
It really has been one of my weaknesses. And top it with a scoop of vanilla ice cream?
Oh. Man.

SAVE THIS CAST IRON SKILLET APPLE CRISP RECIPE TO YOUR FAVORITE PINTEREST BOARD!

This one was so delicious it didn’t need anything else on top. I may or may not have eaten a good portion of it right out of the pan. Maybe that’s because there’s a vanilla bean cooked right in with the apples and spices. It adds a delicious depth of flavor that elevates the simple fruit dessert to extraordinary heights.

Skillet Apple Crisp recipes are especially easy because you prep  and bake the dessert all on one pan. No mixing bowls, no extra dishes, no mess!

I rate everything I make on a scale of 1 -4 with 4 being the best and this Skillet Apple Crisp earned 4 rolling pins.
Yup.

I don’t know if I’ll ever fix apple crisp it any other way again.

What’s in this easy apple crisp?

For the apple mixture you’ll need. . .

What kind of pan do I need?

I make my apple crisp in a 12 inch cast iron skillet. Getting a cast iron skillet is a worthwhile investment, if you don’t have one. It’s sturdy, long lasting and has too many uses to name.

If you have another oven safe skillet you love, go ahead and use it here! Make sure it’s big enough to fit all that apple goodness without spilling over the top.

Don’t have an oven safe skillet? You can still make this apple crisp recipe.

Use any frying pan and follow the recipe through step 9 in the recipe card. Then, transfer the apple mixture to a baking dish, sprinkle on the streusel topping and bake.

What kind of apples are best?

Like many apple dessert recipes, this crisp tastes best when made with firm baking apples. Firmer apples hold their structure better as they bake, caramelizing with the butter, brown sugar and all those glorious spices.

I also tend to prefer apple varieties with a hint of tartness to balance out the sweetness of the sugar. Granny Smith, Pink Lady and Honeycrisp apples are all great choices for baking.

All that aside, this apple crisp will taste amazing no matter what kind of apples you use. It’s fool proof in that regard!

Don’t let fall go by without getting your fill of mouthwatering apple treats!

Bacon lovers will flip for this Bacon Caramel Apple Crisp. The salty smoky bacon provides a satisfying counter to the sweet caramel and spiced apples.

Once you taste this Baked Applesauce you’ll never want to go back to the store bought stuff. Like this skillet apple crisp, it’s made with vanilla and cinnamon for an irresistible flavor.

Every autumn, I get at least two requests to make this Baked Apple Cinnamon Pancake for breakfast–or dinner! It would make a perfect Thanksgiving breakfast idea too.

Here are even more apple recipes to bring fall flavor to your kitchen. . . .

Everyone needs a few dessert recipes you can just toss in a skillet and bake. If you like this easy Skillet Apple Crisp recipe you need to book mark my Skillet Strawberry Rhubarb Crisp to try next summer!

Speaking of fruit desserts, I can hardly wait until blueberry season to bake up another Skillet Blueberry Crisp! In the mean time, I’ll be enjoying this Cranberry Apple Oatmeal Skillet Cookie. The combo of apples and cranberries is hard to beat.

I adapted this apple crisp recipe from this one at Buns In My Oven. With a crunchy pecan topping and all the fall spices I love, it’s the perfect dessert to cozy up with on a chilly autumn day (or any time!). 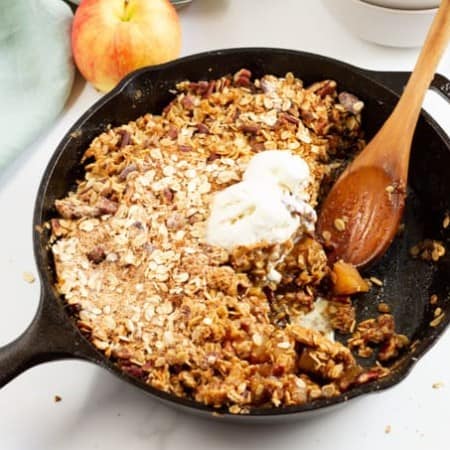