Cinnamon Rice Krispies Treats are a delicious variation on a classic dessert bar! Made with a combination of cinnamon cereals and marshmallows, these ooey gooey treats are full of cinnamon spice flavor.

If you crossed a churro with a Rice Krispy Treat, you’d get these Churro Rice Krispies Treats.

Rice Krispies Treats are one of the easiest no bake desserts out there.

The gooey ribbons of soft melted marshmallow paired with crispy rice cereal makes them a favorite for kids and adults alike. It’s no wonder they’ve been a long time staple dessert at potlucks, birthdays and school parties.

SAVE THIS EASY CHURRO RICE KRISPIES TREATS RECIPE TO YOUR FAVORITE PINTEREST BOARD!

Like lots of moms, I’ve made my fair share of Rice Krispie Treats since my kids were small. It’s so much fun coming up with different mix-ins and flavors to change them up! Even now that my kids are grown, I find myself craving a good old-fashioned rice krispie!

Churro Rice Krispies are inspired by the cinnamon sugar coating on churros and snickerdoodles. I love the way the sweet and slightly spicy flavors come together!

Rice Krispies Treats with cinnamon are made with just a handful of ingredients.

Wondering how to make Cinnamon Rice Krispies Treats? It’s starts like regular rice krispy bars: adding cereal to a mixture of melted butter and marshmallows. You’ll add a little cinnamon to the treats before pressing them into a pan.

The big difference between plain rice krispie treats and Churro Rice Krispies is the cinnamon sugar topping! After pressing the treats into the pan, you sprinkle a cinnamon-sugar on top.

DO NOT skip this step!
It gives every bite a fun cinnamon flavor and perfect texture.

Honestly, when I sprinkled the cinnamon sugar on top of the bars, I really thought it was too much and was rather disgusted by it. BUT THEN…

I gently shook the pan from side to side which made the topping fall down in between all the crevices in the bars and it was GOLDEN!!
Seriously, EVERY bite is FULL of an incredible cinnamon sugar flavor because of it.

Can I freeze rice krispies treats?

Instead, store them in an airtight container at room temperature. They keep well for a few days–IF you can resist eating them all!

Rice Krispies Treats aren’t the only easy no bake dessert I have on the blog.

Readers rave about all of my Dream Bars recipes, especially the Chocolate Peanut Butter Dream Bars! These Chocolate Covered Strawberry Dream Bars are a personal favorite.

You’ll never get bored of Rice Krispies Treats with so many fun flavor and topping options! I even have a Rice Krispies Granola Bar recipe for a version you can call a “healthy” snack!

Check out all of the easy Rice Krispy recipes I’ve shared over the years. 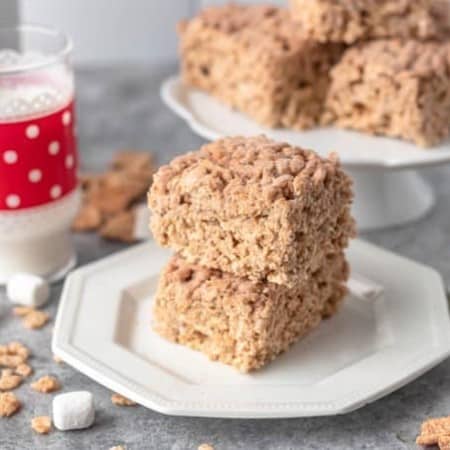