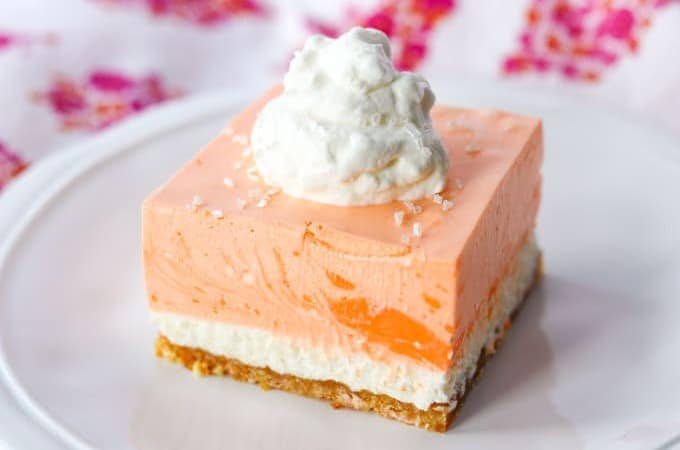 Orange Creamsicle Dream Bars – the perfect NO BAKE refreshing summer dessert! Everyone’s taste buds will love the sugar cone crust, cheesecake layer, and orange cream topping. It will take you back to the days of buying an Orange Creamsicle off the ice cream truck.
They follow the Chocolate Peanut Butter Dream Bars that started it all. 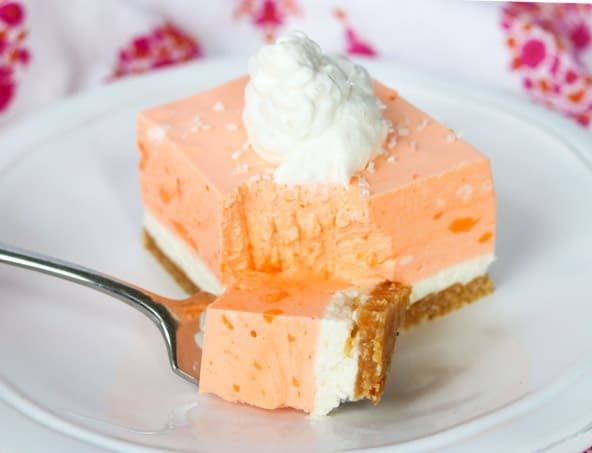 The Orange Creamsicle was and still is one of my most favorite ice cream treats to eat.

There’s just something about that orange and cream flavor that makes me all happy when I take a bite.

So, seeing as how those ice cream bars are so popular, I just thought it made perfect sense to make it into a Dream Bar recipe.
Make them easier to eat on a hot summer’s day, too.
This way, the creamsicle isn’t dripping all over your hand! haha
You’re welcome.

SAVE THIS ORANGE CREAMSICLE DREAM BARS RECIPE TO YOUR FAVORITE PINTEREST BOARD! 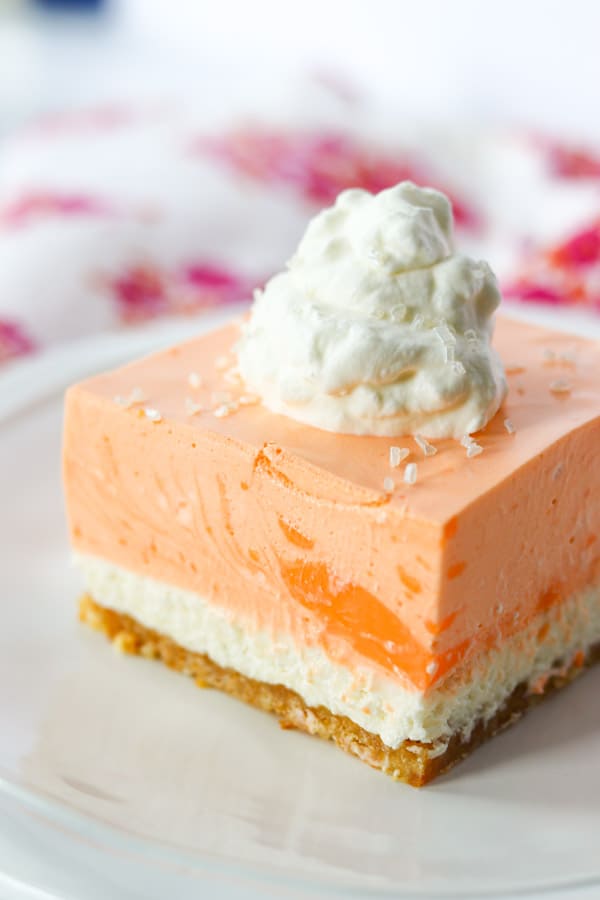 The big news in our family is that another one of our children is off to live in Europe.
If you’ve been following me for a while, you’ll remember that our oldest daughter, Alex (Lexi), moved to Germany almost two years ago to be an au pair (live-in nanny).
She was living with a wonderful family who has three children, a boy age 9, a girl age 6 and a younger boy, 18 months.

She was only able to be with them for a year and then she moved to Berlin where she now watches another little girl.

About two weeks ago, Alex’s original host mother asked her if she knew of anyone who might want to be an au pair for them.
Thinking it would be cool, but most unlikely, she mentioned it to our younger daughter, Emma, who is a full-time nanny in Philadelphia. 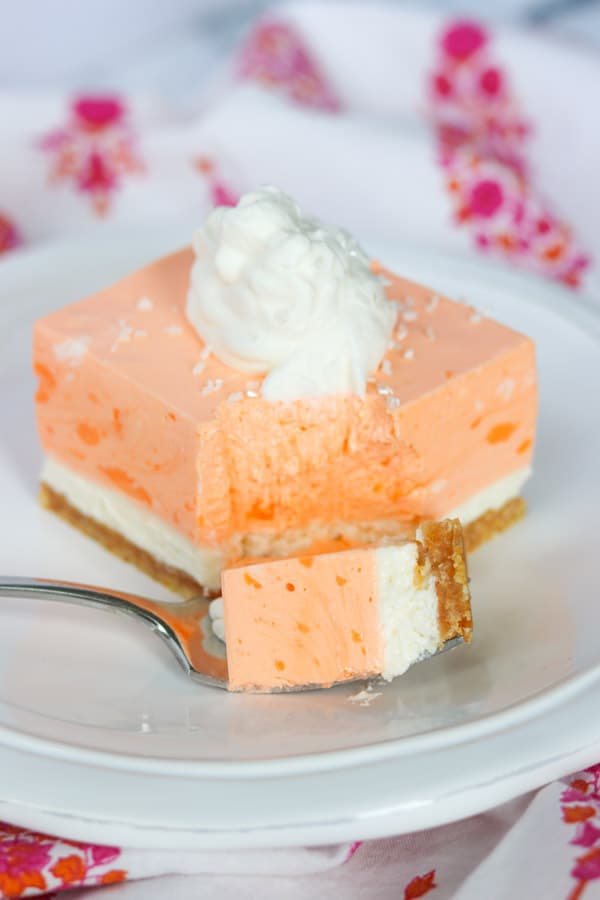 Yet, after some intense thinking, Emma decided to accept the position.
She’ll be leaving for Germany on August 11.
This has all happened within the past two weeks.

While sad for me, I am extremely excited for her for many reasons.
It’s a great opportunity.
She’s young, and while she has no career ties here in the States besides family and friends, she might as well just do it. Carpe diem.

She spent a semester abroad before and has traveled through Europe alone and with friends.
We know the family and are truly blessed that they are so wonderful and think so much of our family. Plus, she’s already met them when she went to visit her sister.

The one thing I just don’t get – Kurt and I moved back east from Phoenix back in March so we could be closer to our children. Granted one was living on another continent, but two were living in Philadelphia which is only a 5 hour train ride away as opposed to a day full of travel.

One up and moves to the other side of the world and now the third is saying he’d like to go explore South America before or after he resumes his unfinished solo Pacific Crest Trail hike.
Whose kids are these?? 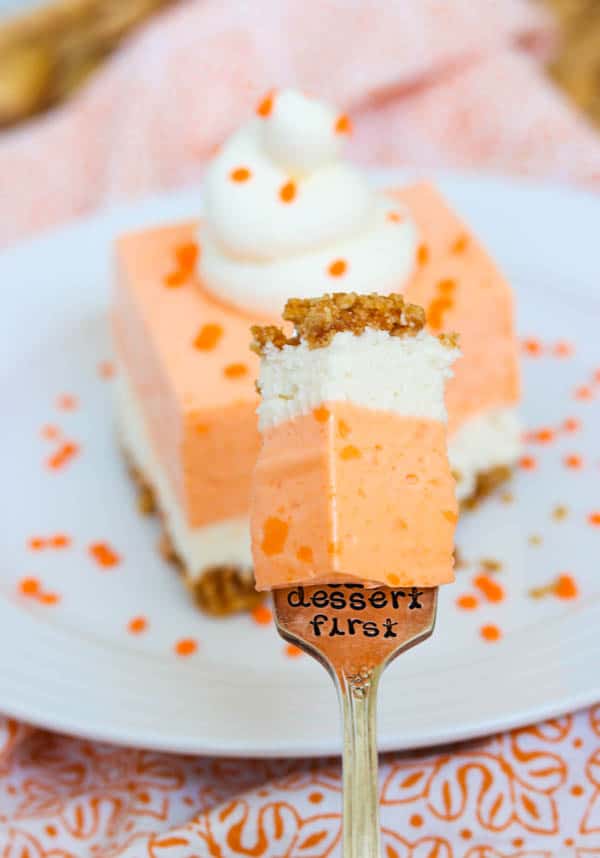 I’m glad they have been bitten by the travel bug. I want them to explore the world, see other cultures and do things I never would have dreamed of doing at their age.
Granted that now at Alex’s age of 27 I was already married with two kids, so wouldn’t have and didn’t go anywhere anyway.
To be a mother was all I ever truly wanted.

But I have to admit, there is a tinge of jealousy that they have no ties, are able to do and see things I haven’t.
I’m super proud that they are so independent, confident and adventurous.
Yet, they know that Kurt and I as well as their siblings, are their ‘home base’ until and even when they meet the loves of their lives.
It makes my heart very happy.

When I heard Emma had decided to move to Germany, I became a bit sad knowing she’d be over there for at least a year.
So, I sat down here at the table and created another dream bar recipe that I think you’ll all really like.

How to make these Orange Creamsicle Dream Bars –

What you need to make this Orange Cream dessert –

SIGN UP FOR THE WEEKLY
365 DAYS OF BAKING & MORE
WEEKLY NEWSLETTER DOWN BELOW!

JOIN THE
365 DAYS OF BAKING AND MORE FACEBOOK GROUP
TO RECEIVE ADVANCE NOTICE
OF MY LIVE FB VIDEOS, SHARE RECIPES AND MORE! 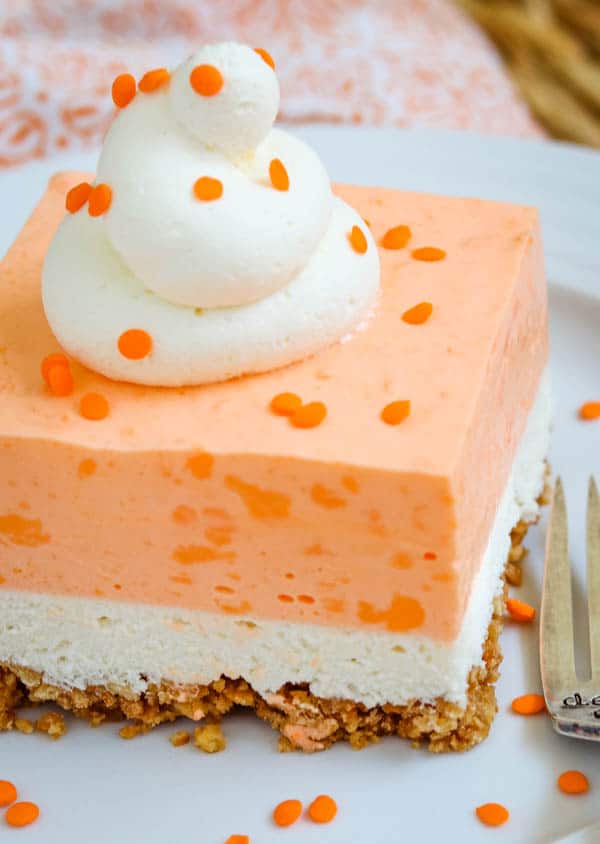 Looking for more Orange Cream dessert ideas to satisfy your craving? I found a few great ones while browsing Pinterest!

I’m in love with this Dreamy Orange Creamsicle Shake from Donna at The Slow Roasted Italian. Get me a paper straw QUICK, please!!

Are you a fudge lover like me? This No Fail Orange Creamsicle Fudge from Jocelyn at Inside BruCrew Life, will be the perfect sweet to give to a neighbor, friend, or relative. Just look at those colors! WOW! 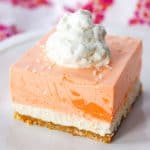 Use the amounts of water in this recipe required to mix the orange gelatin. DO NOT use the amounts listed in the box instructions. We want a more stable gelatin and less of it.
If Orange Cream mixture is left in refrigerator for more than one hour, the gelatin will harden and form. This isn't an issue unless you want a completely creamy layer for the top with NO orange gelatin specks. I think it's a matter of personal, but I actually like it both ways - creamy with no darker orange pieces and then as in the recipe pictures. Edited to add - I've made the recipe again using Nilla Wafers and I LOVED how it turned out. I now prefer using those for the crust as opposed to the crushed cones. Use 1 ⅓ cups of finally crushed Nilla Wafers and the same amount of butter. Place into the freezer as directed.

Like this Orange Creamsicle Dream Bar recipe and looking for more No-Bake desserts for your summer fun? Take a look at these… 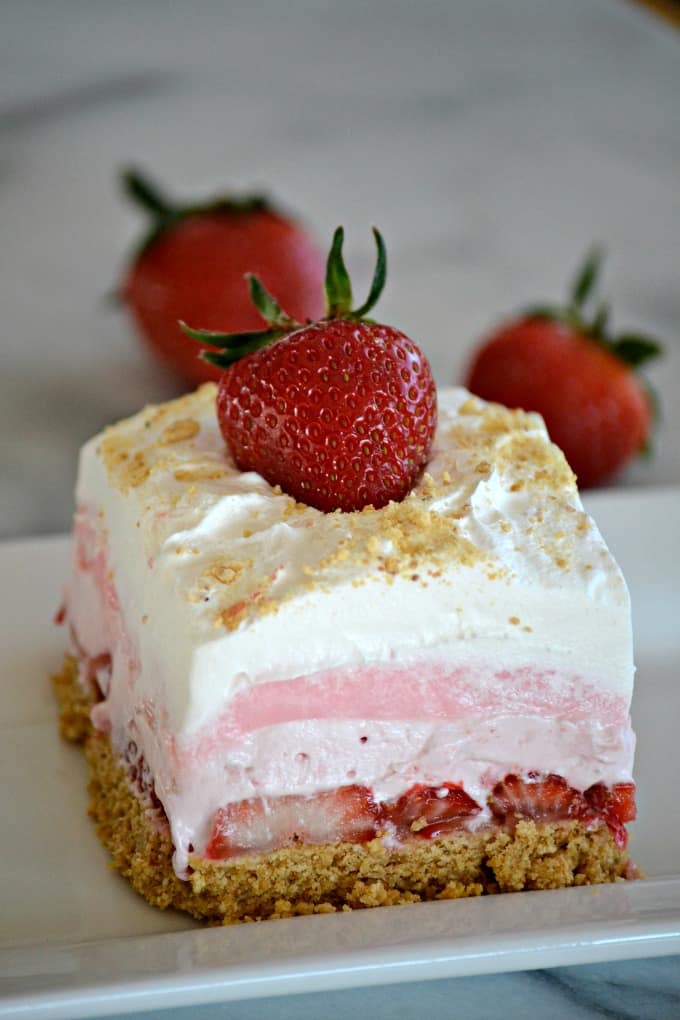 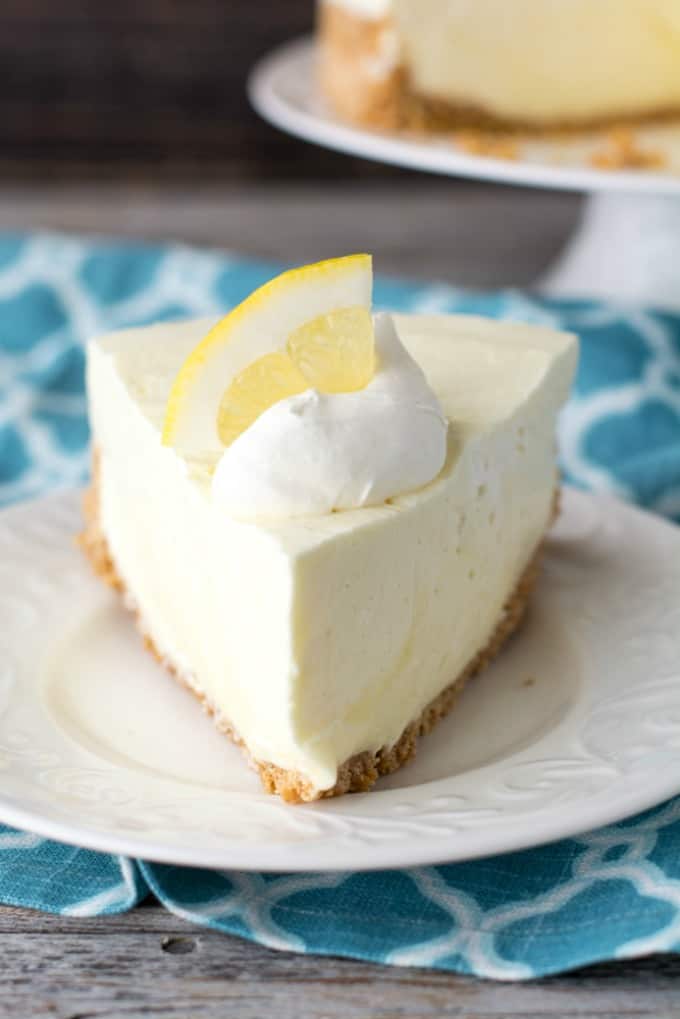 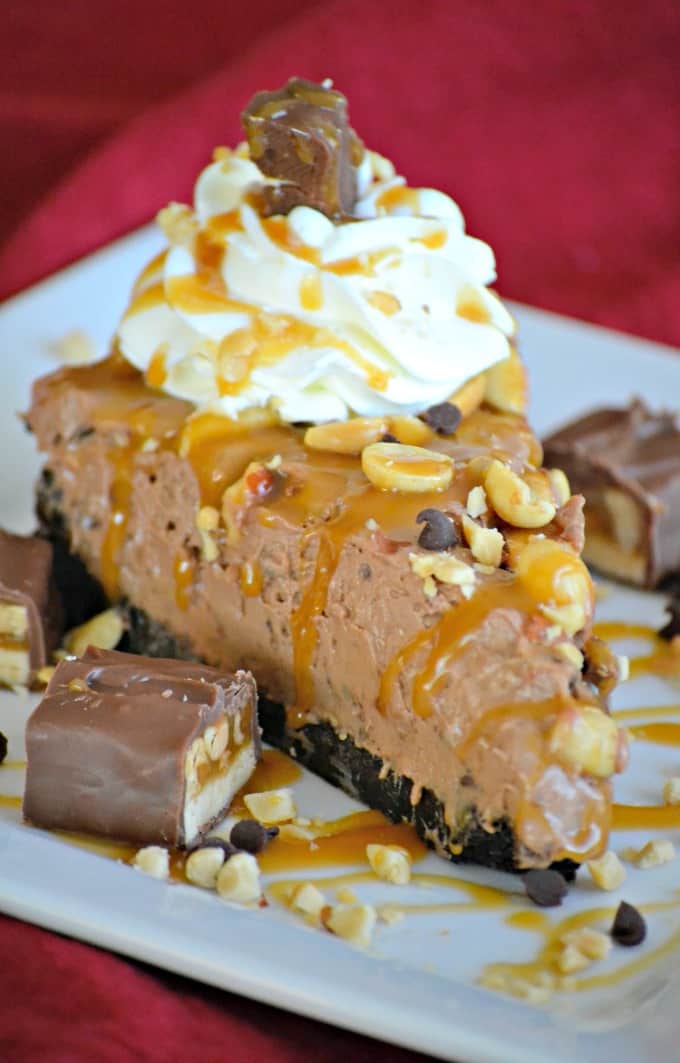