I can never resist the aroma of a freshly baked cinnamon roll.

This cake smells just like cinnamon buns while it’s baking. And it tastes even better.

SAVE THIS CINNAMON ROLL LAYER CAKE RECIPE TO YOUR FAVORITE PINTEREST BOARD!

Lindsay Conchar, founder of the blog Life, Love and Sugar, is the genius behind this Cinnamon Roll Cake recipe. She originally shared it in her book and when I first read the name “cinnamon roll layer cake” I knew I had to try it IMMEDIATELY.

Friends, I was not disappointed. This cake is an explosion of cinnamon sugar flavor with the perfect tender crumb and a gorgeous presentation.

If you love cinnamon rolls, you need this cake in your life. Now.

There are three separate components to Cinnamon Roll Layer Cake: the cake itself, the cinnamon glaze and the cinnamon frosting.

For the cake, you will need:

For the frosting, you will need:

Finally, you’ll need this ingredients for the sweet cinnamon glaze:

How to Assemble a Cinnamon Roll Cake

First, remove the domes from the tops of the cakes so that they are even and flat. Then place one layer on a cake plate and spread cinnamon glaze on top followed by a layer of cinnamon frosting. Repeat with the remaining two layers of cake.

Spread cinnamon frosting all over the top and sides of the layered cake. For a pretty finishing touch, pipe a ring of remaining frosting along the border of the cake.

If Cinnamon Roll Cake is like breakfast for dessert, my Cinnamon Sour Cream Coffee Cake recipe is like dessert for breakfast! This Cranberry Coffee Cake is another breakfast cake recipe that uses sour cream to keep it moist, even days after baking.

Everyone knows someone who won’t even look at a cake unless it contains lots of chocolate. This Peanut Butter Chocolate Lava Cake Recipe is perfect for chocolate lovers and peanut butter lovers alike. My readers rave over this Chocolate Peanut Butter Pudding Cake too.

One final tip for Cinnamon Roll Layer Cake: invite a few people over to enjoy it with you! It’s so good you may be tempted to eat the whole thing in one sitting. Plus, everything is better with friends. Especially CAKE! 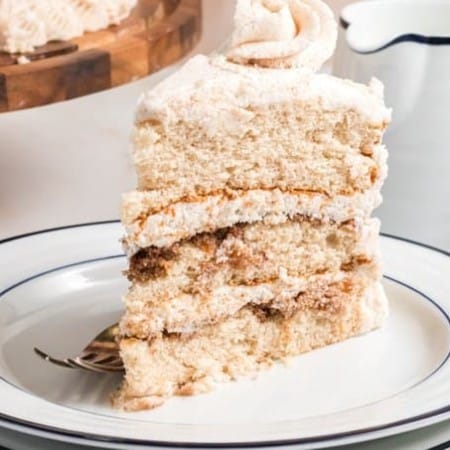