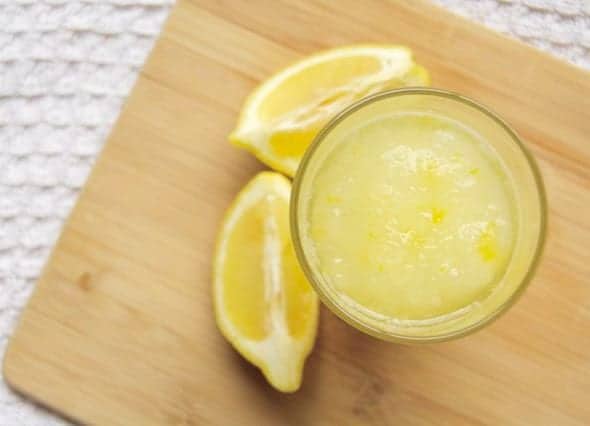 Can I tell you how very, very much I’ve missed you all and how SOOOOO EXTREMELY grateful I am that you, yes YOU, have continued to read, share and support me in my absence these past two weeks. My readers are THE BEST and don’t EVER let anyone ever tell you any differently! 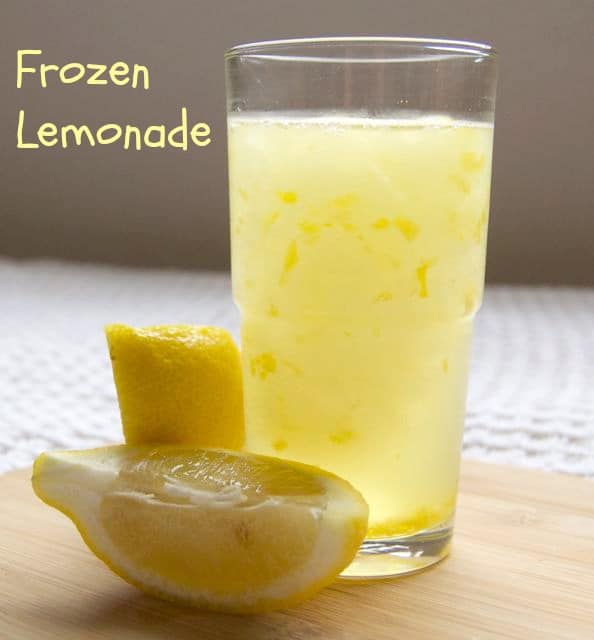 Needless to say, it’s been a stressful two weeks around here. As you well know, we moved… only across town – 7 minutes away in fact, but we moved. And have I told you how much I HATE moving?!

Yeah, I think I did. But, just so you know, I HATE MOVING!!! It is SO very exhausting and I cannot STAND the disorganization that the “new” house is in once everything is “dumped” into it. Because that’s almost precisely what happened – I wanted boxes to be put into their prospective rooms, but most of it went into the living room which was the first room to be entered into.

SAVE THIS FROZEN LEMONADE TO YOUR FAVORITE PINTEREST BOARD!

That and cleaning the new place, too. Unless the house is brand new to us which the past two have been, I can never seem to get the place clean enough to my liking. And even though it’s been a week, there are still some things in this house that are making my skin crawl.

The master bathtub just. looks. gross. It has some scratches, and there’s rust around the drain. Really NOT a big deal, but I really don’t see myself taking a bath in that thing while we are living here.

My daughter called me a germaphobe tonight at dinner. I guess I would have to agree, but I’m not nearly as bad as some people I’ve seen. Oh yeah, and the garbage disposal. There’s something in it. Like a screw or something. Because it rattles when I turn it on.

And I am NOT sticking my hand in the sucker!!!! Even the thought of wearing three layers of disposable gloves (which I’ve considered) skeeves me out and literally makes my skin crawl! I. AM. NOT. KIDDING!!!

I also HATE sand. Have I told you? I think I have issues.

I’m surprised I’m still married and that Mr. 365 hasn’t committed me yet. Twenty-two years of marriage celebrated yesterday and I don’t know where he’s found the patience for putting up with my little idiosyncrasies. He is truly a gift.

And it’s been hot. Very, very hot. And humid. More humid than we’re used to here in Arizona. Which makes it all the more miserable when it’s 108 degrees outside. It just plain ol’ stinks.

I know it’s been pretty hot around the rest of the country, too and what would be more refreshing than some frozen lemonade? 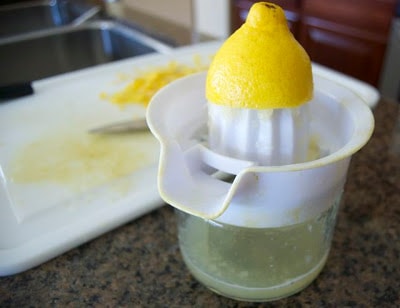 One day, during a much-needed break from packing, I came across something on the Cooking Channel Website, Across the Country: 50 State Dishes. Not surprisingly, Arizona’s dish was a chimichanga. We’re very close to Mexico, so I expected it to be some sort of Mexican food.

Yet being a native Rhode Islander, I was very intrigued as to what the pick might be from there:  probably Johnnycakes, or coffee milk seeing as how it’s the official state drink, maybe grilled pizza from Al Forno where it was first introduced to the U.S. in the 80’s or maybe even a “stuffie” – a quahog stuffed with a mixture of minced clams, breadcrumbs and seasonings then baked in half a clamshell (I should make them one day – yeah, and I don’t like seafood. And you can’t get quahogs out here in Arizona. I’ll see what I can do.).

However, the recipe they featured from the “Biggest Little State in the Union” was, MUCH to my surprise, Frozen Lemonade! NOW, if you are from Rhode Island, live in a neighboring state or have visited, you must be familiar with this yellow and green cup… 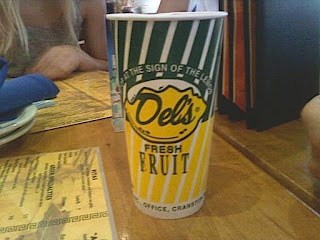 And you KNOW that it is not served with a spoon or a straw because to use either of those items would be SACRILEGE! We natives can always spot a tourist by the way they drink their Del’s. So, word to the wise, if you don’t want to look like you don’t know what you’re doing when you’re drinking a Del’s, don’t and I repeat DON’T ask for a spoon or straw!

Come to think of it, I don’t even know why they make those things available when you order them. Everyone who has ever had one KNOWS that you’re supposed to squeeze the waxy cup so that it cracks and creases, making it easier to drink, slurp or make the stuff at the bottom fall on your nose when you’re nearly done.

Needless to say, when I saw this recipe, I FREAKED. In a good way. We can’t GET this stuff out here in Arizona. Ok, I lie. There is ONE place I can go to, but it is served out of a rotating machine, not out of a cooler and they serve it with a SPOON! 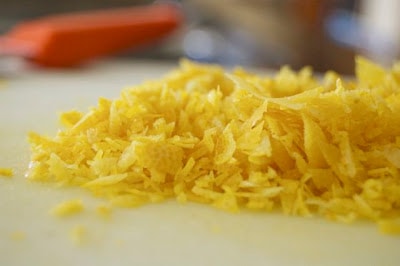 C’mon, REALLY??? It just ain’t the real thing. You can order the powder from Del’s, have it shipped, and add some real lemons to it when you mix it with ice in the blender, but that’s as close as you’ll get to the real thing. Still, it just doesn’t taste the same.

I think it’s like that one recipe you just can’t seem to nail that mom made. No matter what you do or how many times you follow the recipe exactly, it still just doesn’t taste like mom used to make.

Me, I don’t have that problem, God rest her soul, mom was an ok cook and didn’t have a recipe that couldn’t be duplicated, but she was sure to pour lots of love into each of her dishes.

I was also ecstatic seeing this recipe because I knew if it tasted like the “real thing”, I was going to be getting the Mother of the Year Award and that my children, but more so my son, would absolutely love me forever. The boy ALWAYS gets Del’s packets for his birthday and Christmas. He’s addicted. Very. Addicted.

So, when life gives you lemons…or you’re moving…make lemonade! I’ll give you my verdict as to how close it came to our hometown treat after the recipe. I doubled the recipe because I knew that we were going to inhale the stuff if it even came close to the original. 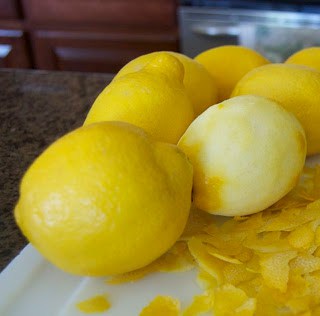 A Taste of Home – Frozen Lemonade 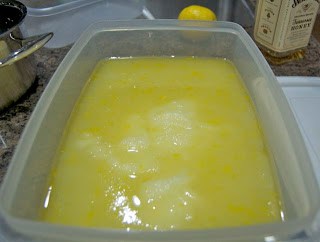 I rate everything I make on a scale of 1-4 with 4 being the best and this Rhode Island Frozen Lemonade earned 3 rolling pins. It’s not the real thing, BUT it sure did smell like it though and brought back a TON of memories. The taste was very similar and probably great by Arizona standards for frozen lemonade, but for Rhode Island, it isn’t.
Ok, at least not by Lynne’s standards. haha, Maybe it was because I didn’t have the wax paper cup. Actually, there is one in my son’s room, but he’s using it to hold his pens and pencils, so I wasn’t going there. I don’t need that special cup that badly! I thought it was quite a bit more tart and sweeter than the real Del’s.

Those summer months can get tough around the country. So, why not give yourself some refreshing drink choices to help you with it?! 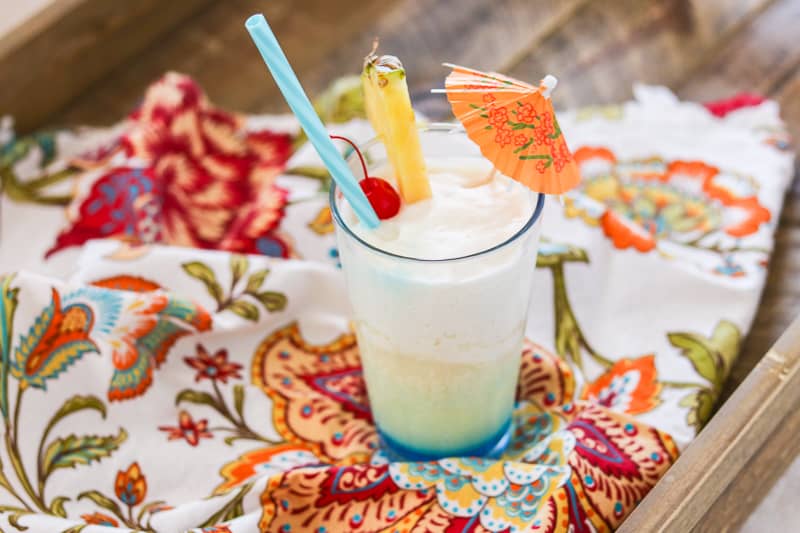 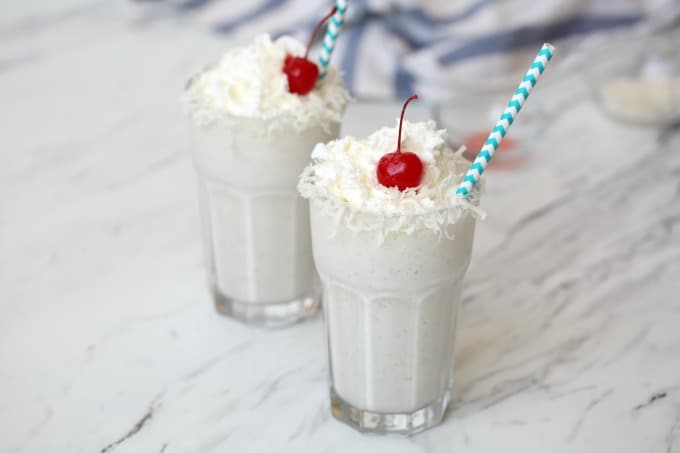 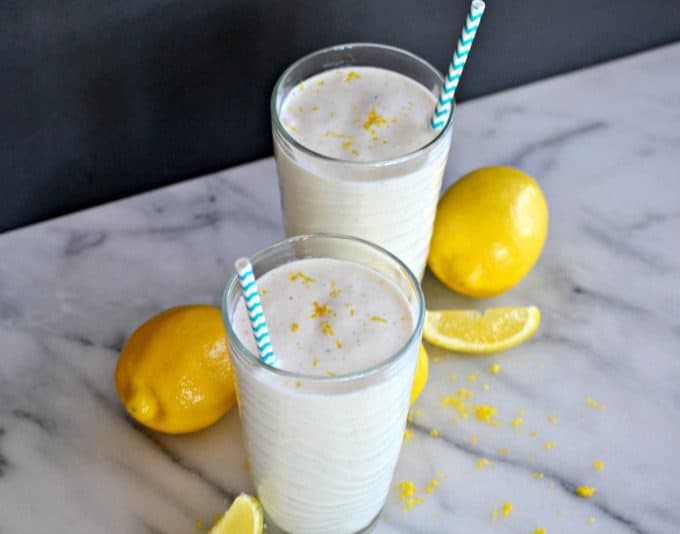 So, to remedy that, after I scooped some of the frozen lemonade into a cup or glass, rather, I added just enough water to make it slushy like the real stuff. I was wishing I’d had a drink shaker, but I just mixed it with a spoon.
At that point it tasted really good was almost exact inconsistency.

I didn’t like all the little pieces of lemon peel. The real stuff has chunks of lemon, and some peel here and there.
I think I’d put the sugar/water/lemon peel mixture through a sieve before mixing it with the lemon juice, water, and salt, and put just a touch of peel back into it. 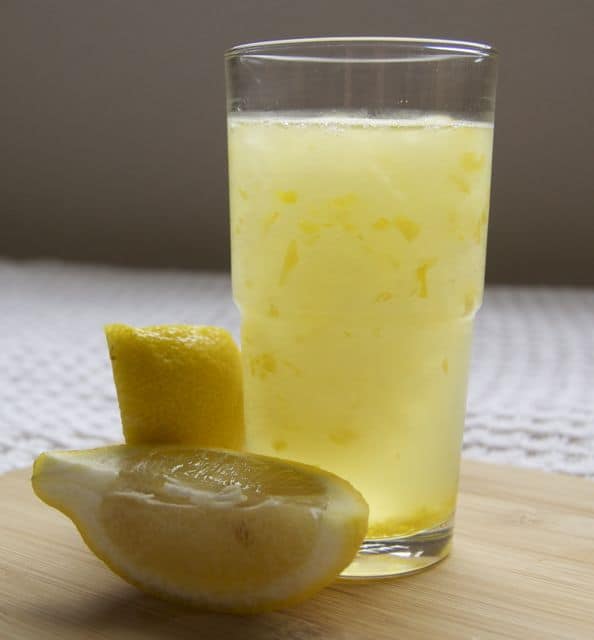 Bottom line, it works. It was good and definitely quite refreshing in this Arizona heat. And be sure to use freshly squeezed lemon juice because bottled or the stuff from concentrate tastes metallic. If you’re not a native RI’er, I think you’ll like it just fine. From RI, it’s not going to beat the “sign of the lemon”, so spend the money and keep Del’s in business! After all, it is a Rhode Island icon.