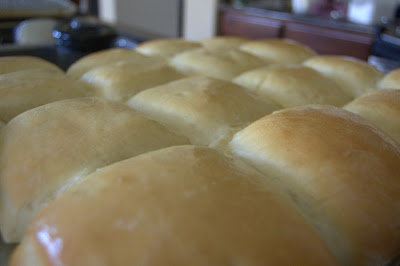 Come on, sing it with me, you know want to. You’ve ALWAYS wanted to be part of the Hallelujah chorus.
I know. Me, too.
It’s alright. C’mon, admit it.
I know you sing it in the shower when you don’t think anyone can hear you and that’s ok. I won’t tell. It will be our little secret.
Yuppers, just you and me.

Or are you singing Carly Rae Jepson’s “Call Me Maybe” like the U.S. Swim Team, the SMU Rowing Team or the Harvard Baseball Team?

I’m rejoicing because I’m FINALLY getting back into the swing of things.
I’ve been away from the blog because we moved our family to the other side of town this week and as you may very well know,
Moving. Is. NOT. Easy.
Personally, I hate it.
It’s exhausting, it hurts.
You get bruises all over your body.
And you’re extremely sore after it’s all over. Especially at this age.
It reminds me of labor. It happens and then I say I’m never doing it again.
And then it happens.
Until one person gets fixed.

We probably didn’t pick the best of weeks to undertake moving the family, seeing as how our son started his sophomore year at the same high school yesterday and we’re moving our middle child, our 2nd daughter, into her college dorm for her freshman year on Thursday.
Two moves in one week?

Yet, this is the week of what life is all about in a nutshell ~ New beginnings. Changes. Parting with the past (which included some of the material things we’ve accumulated over the years. And even though we don’t have as much as most people do, there was STILL A LOT of STUFF to move!!). Tears of sadness, joy and frustration. The realization that no matter what happens, we will be taken care of no matter where we are by a God who has completely and utterly blessed us time and time again.
And that we are.
A family.
One cohesive unit.
With bonds that are so strong and a love for each other that is completely immeasurable.

Even if we have killed over 30 flies over the past few days because the door was open like a barn while we were moving stuff into the house.
I hate those creatures.
They’re just plain ol’ GROSS!
But life is still good.

I HATE this thing!

I already burned the Cream of Wheat I made for breakfast yesterday because this contraption is so completely foreign to me now. The last time I had an electric oven was in our “early years”, pre-kids and it had the coils, not this fancy glass-top thing-a-ma-jig with the burners flaring intermittently.
I have no idea what I’m doing with this THING!!
Any tips or helpful hints would be GREATLY appreciated!! (And that is SO definitely an understatement)
Please send any e-mails directly to me at lafbaker@gmail.com or leave a comment at the bottom of this post.
PLEASE, I need some help here!!!!! I feel as if this blogger is going to lose her liveliness because she now has a crappy oven.
Ok, not really crappy. I know that the interpretation of crappiness is in the eye of the beholder.
But going from gas to electric is like going from lots of sex to no sex for three years.
Think about it.
I’m sorry.
There is really no other way to put it to make anyone understand what it’s like.
And I explained it in this sense to my Mr. yesterday after I was so distraught hearing how much it would cost to pay to have a gas line put in.
I think after listening to that analogy he understood.

Also, any tips or helpful hints on how to remove the smell of cigarettes from my bedroom carpet would be as much appreciated as tips about the oven.
Fortunately, we can only smell it in our master bedroom.
And even though the walls have been freshly painted and the carpets cleaned, it’s still pretty dang stinky.
Nothing like going into my bedroom and being hit with the ambiance of a bar, but without the alcohol.
No bueno.

Yowza.
It’s 7:00 am and Mr. 365 are enjoying some quiet time on the laptops while one child is still in bed and the other two left for cross country practice two hours ago.
He looks over at me and says, “We have an anniversary coming up in a few days, don’t we?”
“What, hunh? Hmmm…yes, I guess you’re right.”
I feel like I’m just coming up for air and our 22nd anniversary had definitely been placed WWAAYY on the back burner.
I’m still living a life of major disorganization where I know that my measuring spoons and rubber spatulas are in a box somewhere in the vicinity, but have yet to be located.
At least I remembered where I packed the toilet paper.

We don’t typically “do” anything special for anniversaries, no gifts, but maybe just a nice dinner out.
The only trips we’ve taken we’re for our “big” ones, the 10th and 20th, and even then we didn’t leave the country as I hoped we would.
I think this weekend we’ll do dinner and see that new movie with my most very favorite actress, Meryl Streep, Tommy Lee Jones and Steve Carell.
Just some time alone for the two of us to reflect on our marriage, the kids, and each other will be very welcomed.

Ah, it’s all just part of this delicious life.
And speaking of delicious…

Have you made these rolls yet?
They are a copycat recipe of the famous Texas Roadhouse Rolls from Eat Cake for Dinner I made back on day 343 of my 365 days, and they
WERE.
TO.
DIE.
FOR!!!
Needless to say, they are one of the most popular recipes here on the blog and have been pinned time and time again on Pinterest.
So, I figured we’d revisit them again.
If you haven’t made them, seriously consider it.
If you’ve pinned them with the intention of making them, don’t delay.
Or, even if you have made them, make them again.
They are SSSSSOOOOOO very melt-in-you-mouth yummy, that I can’t even begin to tell you.

Oh, and don’t forget to make that seriously delicious Cinnamon Honey Butter to go along with them.
They’re really delicious without, but WWAAYY over the top with that butter!
Make them.
Today.
They’ll bring a warm, melted buttery smile to your face.
And make you feel good.
I know it’s what I need right about now.
And they might even be good fresh out of an *cough, sputter, choke* electric oven… *gag*

Texas Roadhouse Rolls – makes 5-6 dozen smaller ones, but I made 19 larger ones as Jenn had recommended at Eat Cake. After all, bigger IS better, and it’s less you have to eat! 😉
4 teaspoons active dry yeast
1/2 cup warm water
2 cups milk scalded and cooled to lukewarm
1/2 cup plus 1 teaspoon sugar, separated
3 tablespoons melted butter, cooled slightly, plus additional for brushing
7-8 cups flour (I used about 7 1/2 cups)
2 whole eggs
2 teaspoons salt

In the bowl of an electric mixer, dissolve yeast in the warm water with the teaspoon of sugar. 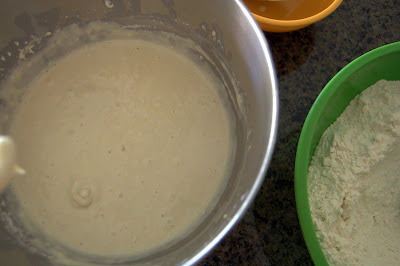 With the dough hook attached, mix in the milk, remaining 1/2 cup of sugar, and enough flour to make a medium batter. (I added about 2 1/2 cups of flour here.)
Mix thoroughly.
Allow to stand until light and foamy, about 8-10 minutes. 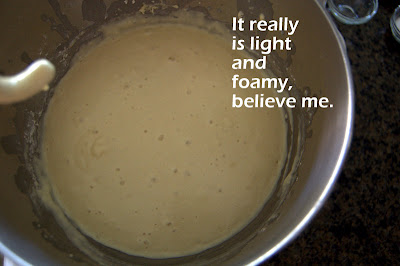 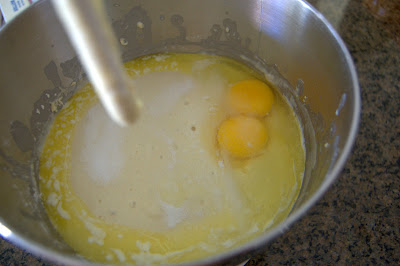 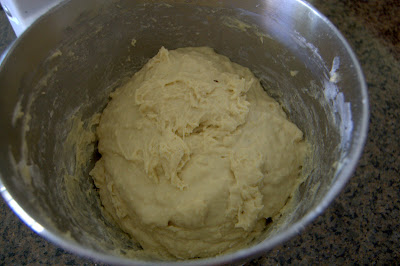 Turn dough out onto a lightly floured surface, and allow it to rest for about 10 minutes.
While dough is resting, prepare a large bowl by spraying it with cooking spray.
Knead dough until it is smooth and satiny. 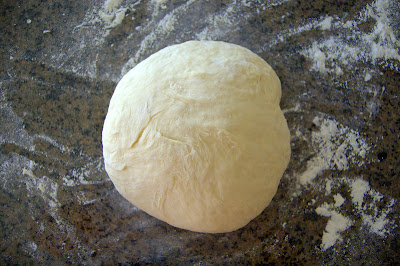 Place into prepared bowl and turn over, coating it with oil. 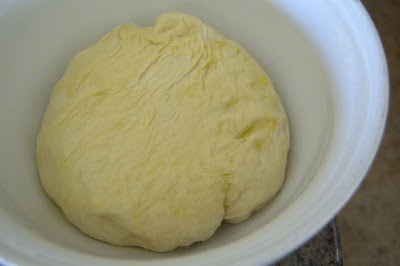 Cover bowl tightly with plastic wrap and set to rise in a warm area until double in size, about 1-1 1/2 hours. 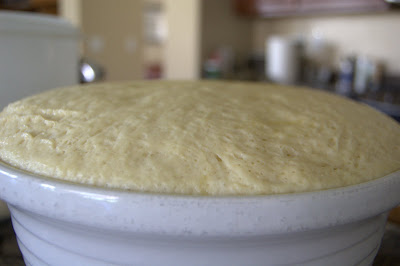 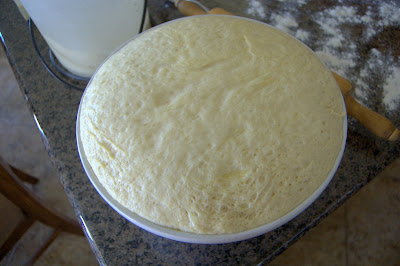 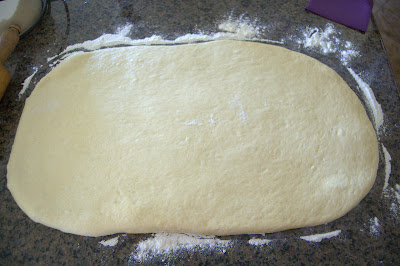 Fold the rectangle in half (short way – I know there’s another way to say that, but I’m blanking out at the moment), so that it is about 1-inch in thickness, and lightly roll together to seal the sides together. 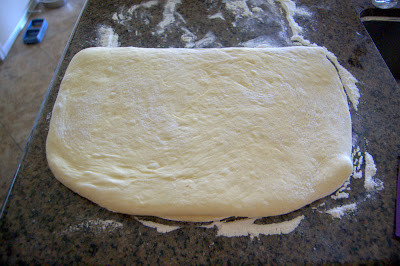 Allow to rest for 10 minutes.
With a dough scraper, cut into rolls. 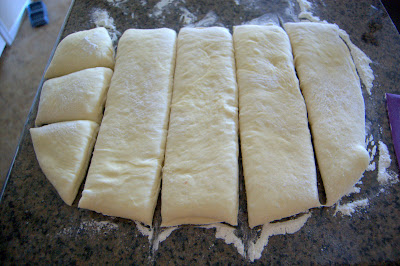 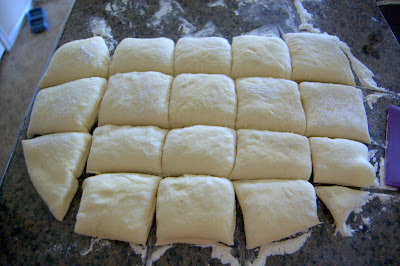 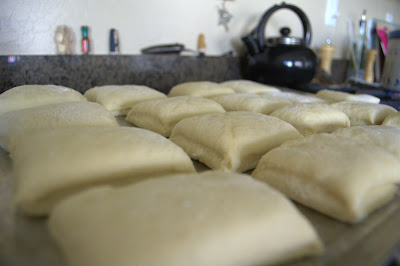 Cover with a damp towel and allow to rise in a warm area until double in size, about 1 hour or so. 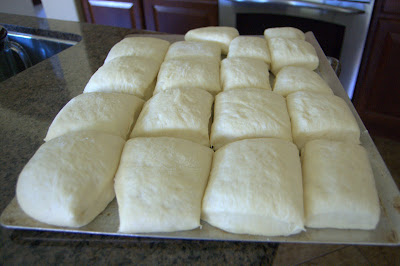 Preheat oven to 350 and bake rolls for 10-15 minutes or until lightly golden.
Upon removing from oven, brush tops with melted butter.

In the bowl of an electric mixer fitted with the whisk attachment, beat the butter for approximately 30 seconds until lightly whipped.
Add confectioners’ sugar, honey and cinnamon and beat until smooth and thoroughly combined, scraping down the sides of the bowl.
Continue beating on medium-high speed until light and fluffy, about 2-3 minutes. 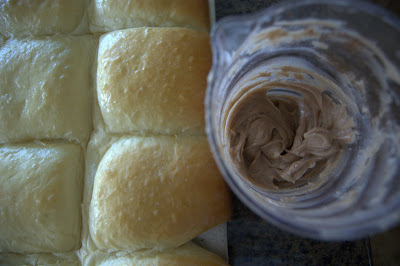 I rate everything I make on a scale of 1-4 with 4 being the best and these Copycat Texas Roadhouse Rolls earned 4 ROLLING PINS!!!
There were so DOGGONE delicious!!!

You must make them.
You will make LOTS of friends.
You will win over your significant other if you haven’t already or are in need of a way to win him or her over again.
You will make those who matter most in your life feel all warm and fuzzy inside.
Or even if you make them for the homeless, they will most definitely feel it, too.
And feeling warm and fuzzy is good.