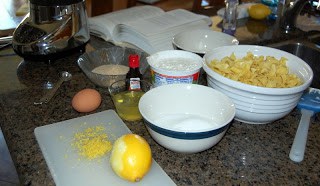 I’ve started reading Julie & Julia  365 days, 524 recipes, 1 tiny apartment kitchen by Julie Powell. It’s the book that the movie, Julie & Julia was based on. I saw the movie, but wanted to read the book because a lot of times, as we all know, the book is better. Given the fact that I’ve been baking for the past 16 days, I have absolutely no idea how this woman stayed sane doing 524 recipes in 365 days and worked a full-time job! I would have lost it. Ok, to be honest, it’s something I never would have done. I was going nuts enough when I was working full-time and managing a home, never mind the cooking part of it. I give her a lot of credit.

Voilà! A recipe from a new book! The Essential Vegetarian Cookbook:  Your guide to the Best Foods on Earth, pg. 97; author, Diana Shaw;  Clarkson/Potter Publishers, a division of Random House; ISBN 0-517-59989-9. Today it is a Breakfast Kugel or rather an early afternoon Kugel. A kugel is typically a Jewish side dish or dessert made of baked noodles. When we would have family potlucks, Dan would always make this, and I absolutely loved it. I don’t have his recipe and always meant to ask him for it, so I was excited when I found one in my recipe book. Not the same as Dan’s (sigh). Maybe it was because today I had already pigged out on those Tostito Roasted Garlic & Black Bean Chips (I LOVE those!) and salsa. I just wasn’t hungry, but of course, had to try it anyway. I’m feeling like I’m going to need an overdosing of vegetables soon. 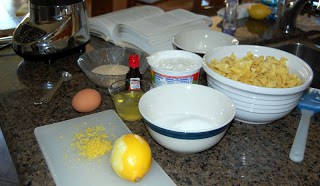 Heat the oven to 350ºF. Lightly grease an 8-inch baking pan or squirt with nonstick spray.
Bring a large pot of water to a boil. Stir in the pasta, and cook until not quite done (test it with your teeth, it should still be a bit hard in the center when you bite into one), about 6 minutes.
In a food processor or blender, combine the egg and egg whites. Add the cottage or farmer cheese, sour cream, sugar, lemon or orange zest, and vanilla extract. Process until smooth. 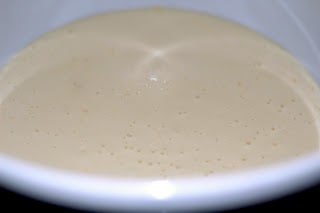 Transfer the mixture to a mixing bowl and stir in the breadcrumbs and raisins or cherries. I added the noodles here because I didn’t see where she wanted them added, but I’m assuming this was the logical place to do it. And you know what assume means, but it worked out. 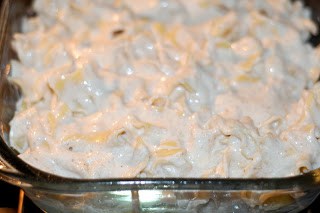 Spoon into the baking pan and bake until golden brown, about 50 minutes. 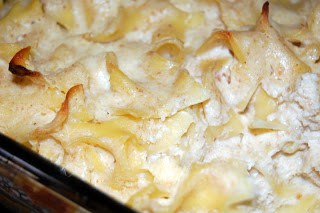 Let sit at room temperature for 15 minutes before cutting and serving. Serve warm right away or refrigerate, covered, and serve cold.

I used regular noodles because I’m partial to them and I thought about using plain Greek yogurt instead of the sour cream. I’ve used it before as a substitution, and while the yogurt is a bit more tart than sour cream, I never heard any complaints from family members, but I didn’t have any. I didn’t use the raisins or cherries because I know the dish won’t be eaten in this house if I include them. Also, when you are grating the lemon or orange rind, please make sure you keep your thumb knuckle far enough away from the grater. I took a nice little chunk out of mine. This is good though, only my second injury since beginning this. The first was a slight burn on the second day when I went to take the Cream Cheese cookies out of the oven. I’m fine, it’s nothing a band-aid can’t handle; just bake with care.
I liked the taste because it was very similar to the blintze filling that I make but without the bread crumbs. I didn’t like the texture of the bread crumbs, but I’m sure they were used to thicken it as the mixture was very runny before they were added and also to ensure that the noodles wouldn’t sink. I don’t remember the one Dan made for the family ever having any bread crumbs either. However, it was tasty and I really liked the sour cream/cream cheese/lemon combination. To be honest though , I don’t know if I’d ever make it again. But if I did, I’d try it without the bread crumbs and see how it turns out. This one earns: 2½ rolling pins.
Happy baking!