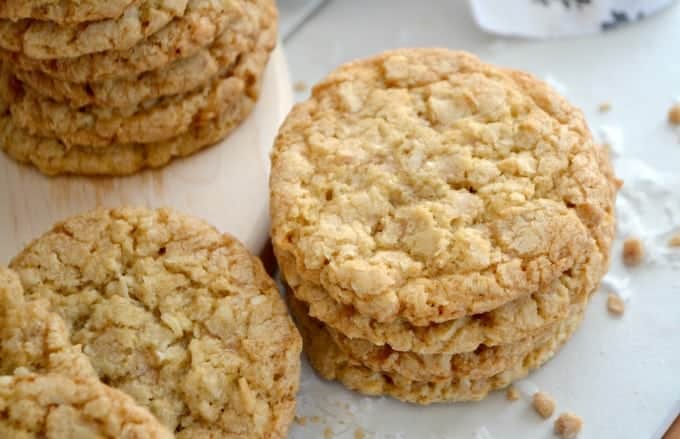 Joan’s Coconut Ranger Cookies – these were originally posted on Joan’s page Chocolate, Chocolate and More. They are a chewy, delicious cookie filled with toffee, ground almonds and coconut. It’s so hard to eat just one! 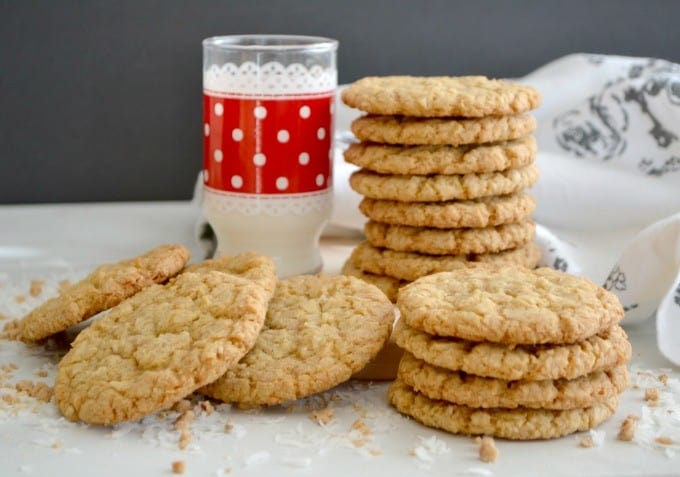 The blogging world lost a shining star last Thursday and I lost a very, very dear friend. To everyone’s shock, Joan Hayes from Chocolate, Chocolate and More, had a massive heart attack and died in her sleep. She was only 49. 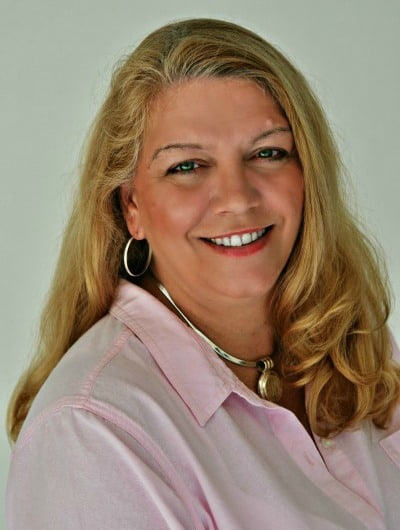 Oh, this woman.
I ask that you bear with me as this is one of the most difficult posts I’ve ever had to write. The pain is so very real for many of us, but today is a very special day. It’s National Chocolate Day, one that is perfectly fitting for Joan. She loved, loved, LOVED and promoted all things chocolate, though she wasn’t biased to any dessert.

So, even though these cookies have not a speck of chocolate in them, it was placed on my heart that I share them with you because they are very special to me and were as well to Joan. 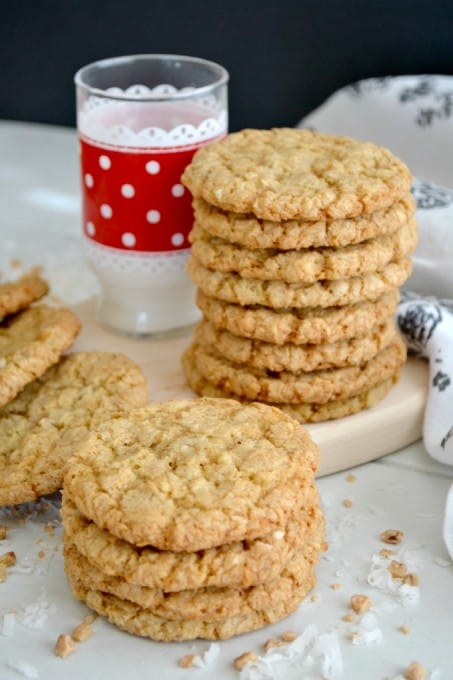 I suppose the beginning is the best place to start, hunh?
Way back in 2011, I started blogging. Not really having any idea what I was doing or if people were really paying any attention to my blog, I received a comment from Joan a few months later, saying hello and that she knew we must be long lost sisters. We immediately became fast friends and blogging buddies, encouraging each other, sharing what was working and what wasn’t, and celebrating each other’s accomplishments, especially as our Facebook pages grew. The day our middle daughter graduated high school I was honored to have Joan do a guest post and a family favorite recipe, Seven Layer Bars. 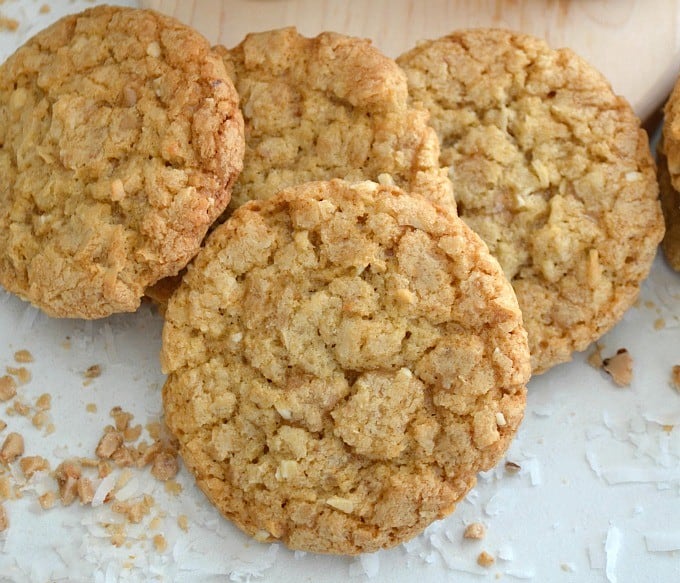 Throughout the years we’d communicate, keep up with what was going on with each other’s family and would always say that we couldn’t wait to meet one day in person.
Finally, this past January we were not only able to meet, but roomed together on the Oasis of the Seas while on our Caribbean Click Blogger Retreat. It was nothing short of A-M-A-Z-I-N-G! It was absolutely wonderful to not only be able to finally meet people we had been communicating with online for years, but to also spend a week with them up close and personal on a boat! Ok, ship. They called it a ship.
Joan and I had flown in the night before we were scheduled to set sail. It felt so good to hug her in person because it honestly felt like we had known each other since we were little. Like sisters, even! 😉
That night the bloggers were treated to a cocktail hour with h’ors d-oeuvres. The food was all well and good, but Joan just wasn’t content and wanted more. And if you know Joan, you know exactly what she requested!
She pulled one of the servers over and said something to the extent, “Could you talk to the Chef? I want a plate of chocolate desserts. You must have some really good desserts back there in the kitchen that he could make us up a plate of.” The server grinned and said he’d go talk to the Chef (even though the kitchen was at this point closed).
About 10 minutes later, back he arrived with this: 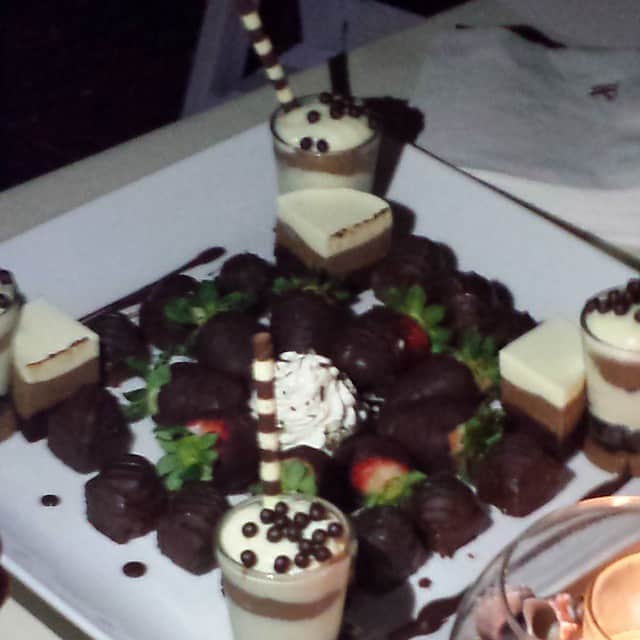 Chocolate dipped strawberries, white chocolate mousse, triple chocolate cheesecake bars and I can’t remember what else. It was absolutely incredible and she beamed when it was put down in front of us. As I found out that night, Joan had like the Midas touch, especially when it came to anything chocolate. She’d ask and she’d be given. She never did it in a pushy way, but was always very polite and very determined to get what she wanted. “How you gonna get it if you don’t ask?” was something I heard her say over and over during our various times together.
Later, the Chef came out to see if we were enjoying it and told us that it would be on the house. Needless to say, it was a wonderful way to start our trip. 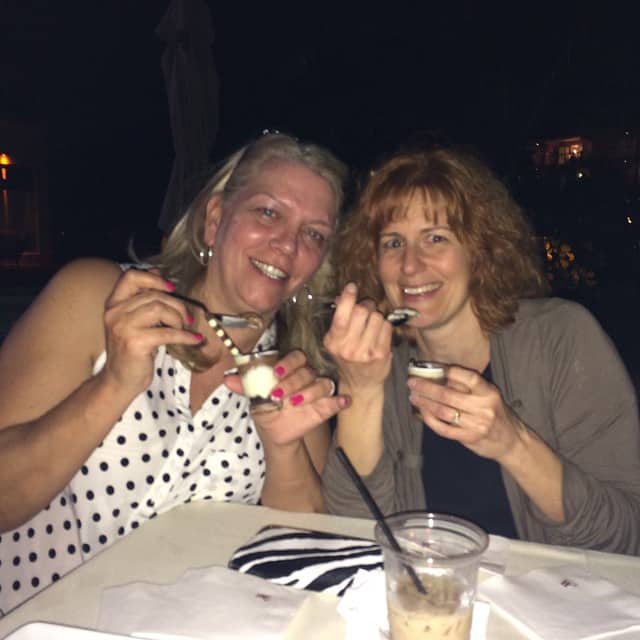 While we were on our cruise, we were able to go on excursions in each port we stopped.
In St. Thomas, we went to the Mountain Top and had this picture taken. 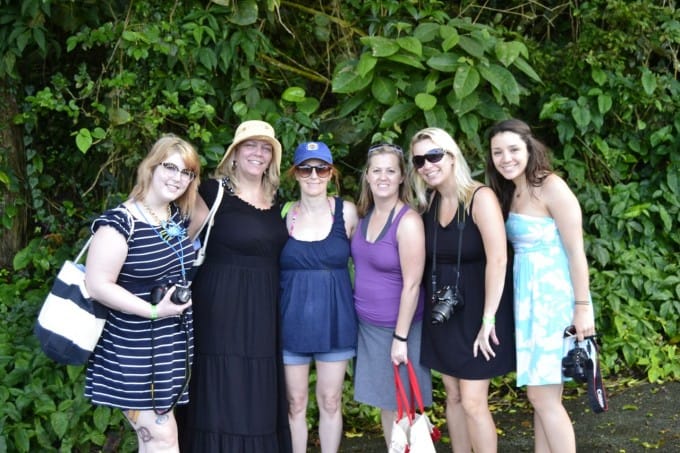 At one point during our trips around the islands, we stopped to sample some rum, but what did Joan want?
Yup, chocolate.
She asked the bartender if they had anything chocolate and of course, he complied, bringing out a very decadent chocolate dessert.
“If you don’t ask, you’re not gonna get it!”, she said. 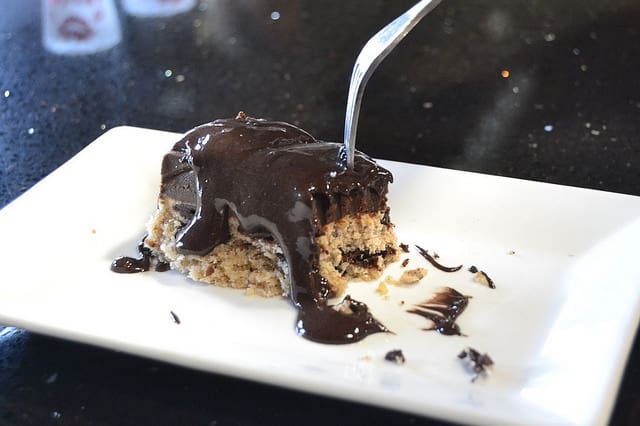 So, on this cruise is where the Coconut Ranger Cookie recipe comes in. There are many places to eat aboard the Oasis of the Seas and one that we went to often was the Windjammer Marketplace. One night early on she discovered these cookies and she fell in love with them. They were sweet, chewy and absolutely delicious. From that point on, she took a plate of cookies back to our room every day, so she could snack on them later. We even waited front and center at the dessert bar for them to come out of the oven one night (with a couple of other cruisers) when we saw they were gone.
On our kitchen tour, she asked the Executive Chef if she could have the cookie recipe and of course, he said he’d email it to her. She received the recipe and had to make some adjustments as she couldn’t locate praline paste in her small town. It took her SEVEN times before she was satisfied with a recipe that tasted just like the ones we’d eaten. I could tell when I tasted the dough that she was spot on and I couldn’t wait to enjoy the final result.
What I wasn’t expecting as I opened the oven door to remove them was a flood of tears. Smelling the cookies, seeing how beautifully they turned out and knowing how much she absolutely loved these things got the best of me. So many wonderful memories of eating these cookies with Joan. 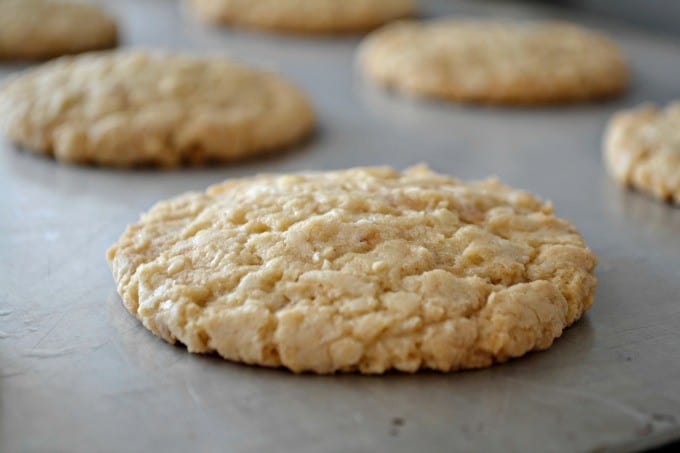 Fast forward a couple of months and we’re together again at a small blogger retreat hosted by Mary of Barefeet in the Kitchen. We were a total of 6 incredibly fun, goofy and very talented bloggers. We “worked”, but we definitely laughed a whole heck of a lot more.
We went to brunch at Snooze and Joan made sure a couple of “extra” things were ordered, so that she could get a taste of everything that caught her eye. 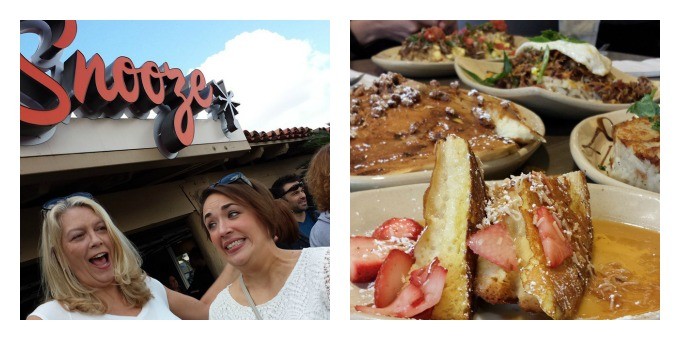 At the end of the retreat, we pulled an all-nighter and played Cards against Humanity. My cheeks and stomach hurt from laughing so much!

Last month, we were able to room together again for the International Food Bloggers Conference in Seattle. She’d gone last year and really enjoyed it, so talked me into attending this year. She arranged for a group of us to go on a food tour through Pike Place Market and what else, a chocolate tour, of course. 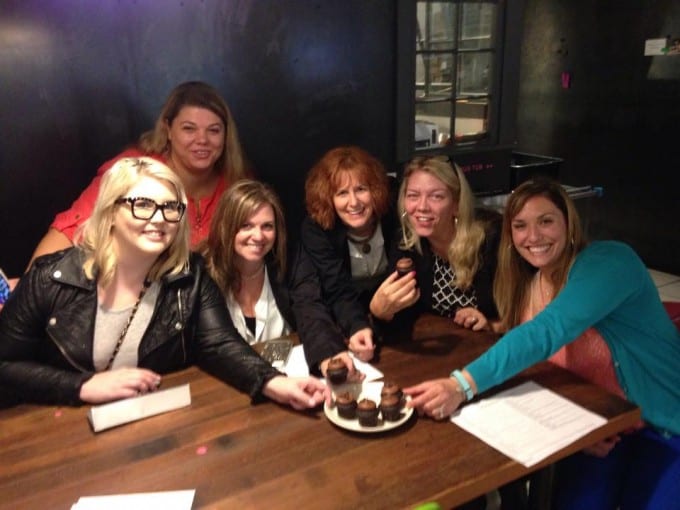 One day, she had gone to the Space Needle with friends and I’d decided to go to a conference session. On the way back to our room A gentleman on the elevator asked what conference I was attending. I told him it was a food blogger’s conference, and he said that it was ironic because he worked for Nestle and hadn’t even heard about it. Later, I’d told Joan.
“What?! Well, you gave him my card, right and told him I have a chocolate blog? I’m always using their chocolate chips and they’d be a great sponsor to have!
“Um, no,” I replied, “I can’t think that fast on my feet. I didn’t even give him my card or get his name for crying out loud!”
The whole weekend, I kept looking, but never found him.

One night a group of us went out to dinner. At the end of the meal, the waiter came around with the dessert cart and because the few of us sitting at the end of the table were full, we’d sent it away. Apparently, the cart never made it’s way to Joan who was sitting at the middle of the table because she became upset that it hadn’t been offered to her.
“What, no dessert? I can’t have a meal without eating dessert!! Even if I’m full I’ll get it to go!”
So, off I went to grab our waiter with the cart.
For Joan, skipping dessert was sacrilegious. 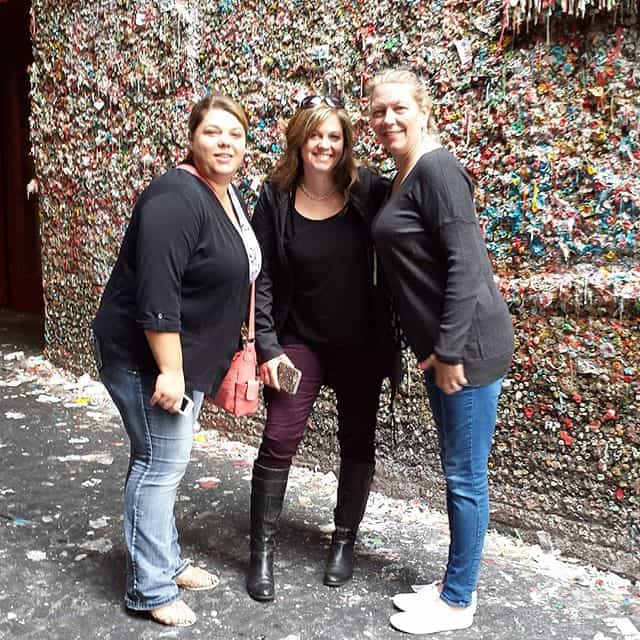 Pictured below are three very special items that will always remind me of Joan. I purchased the napkin when we went shopping in Seattle. The little milk glass was purchased at an antique store while on Mary’s retreat, and in that antique shop we all discovered some very creepy looking dolls. Over the months since then we’ve all randomly received text and Facebook messages with images of them, continuing the laughs. The Christmas ornament is the Seattle Space Needle that Joan received at our conference there. She gave it to me as we were packing because she knew I collected them whenever I take a trip and hadn’t yet found one. That’s going to be one special ornament on our tree for many, many years to come. 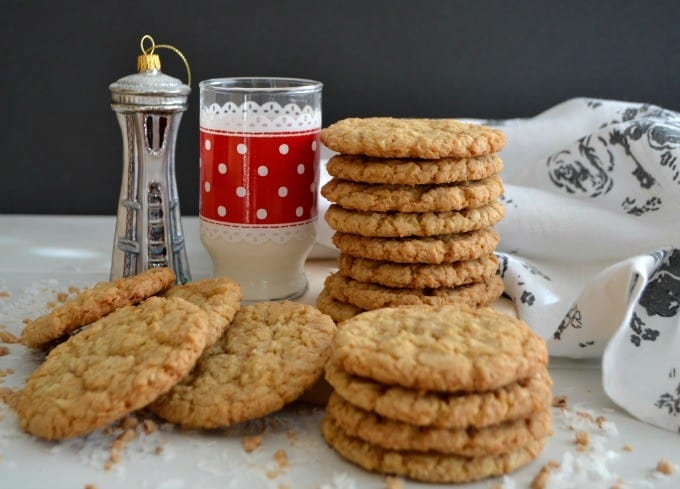 The laughs I’ve had with this woman are countless and I’ll cherish them forever. 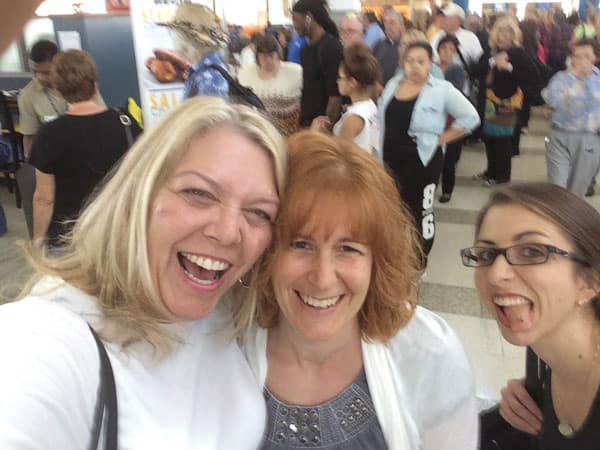 I was looking for a quote about grieving the other day when I came across this quote from Winnie the Pooh, who’s been a favorite ever since I was little. 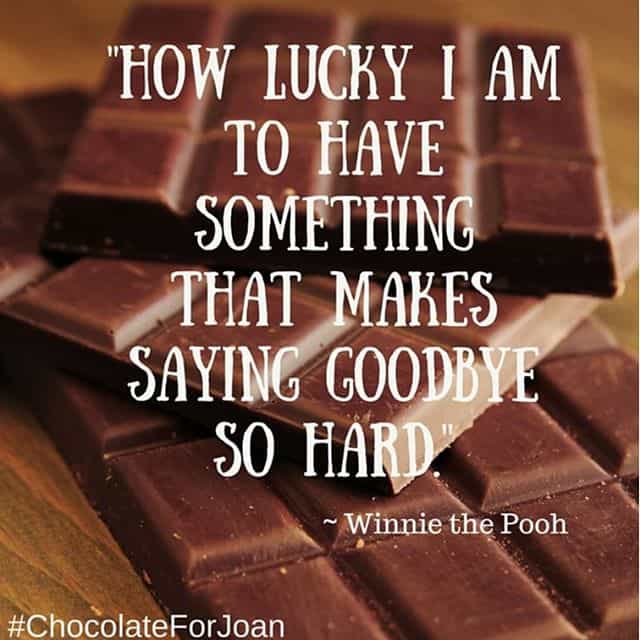 Since today is National Chocolate Day, we are honoring Joan and her love of all things chocolate (including diamonds 😉 ). There are many, many bloggers who have dedicated their posts to her today. We’d love for you to follow along on Instagram and Twitter, looking for #ChocolateForJoan and #ChocolateEveryDamnDay. We’d love for you to post your creations as well! If you’ve made something from her blog and want to share it with us, we would absolutely love to see it!! I know she’s smiling down on all of us, especially since today is all about chocolate.

My purpose for that is to drive as many people as possible to her blog for the benefit of her three children. The ads on her site will continue to generate income for them and that was something she was adamant about doing if she should pass away. There are people who are continuing her Facebook page as well as her blog until her sister, Gail and cousin, Kim take it over.
We ask that you visit her blog, Chocolate, Chocolate and More throughout the holidays and far beyond. She has many, many recipes that your family and friends will continue to enjoy.

Thank you all for supporting Joan over the years and for continuing to do so.