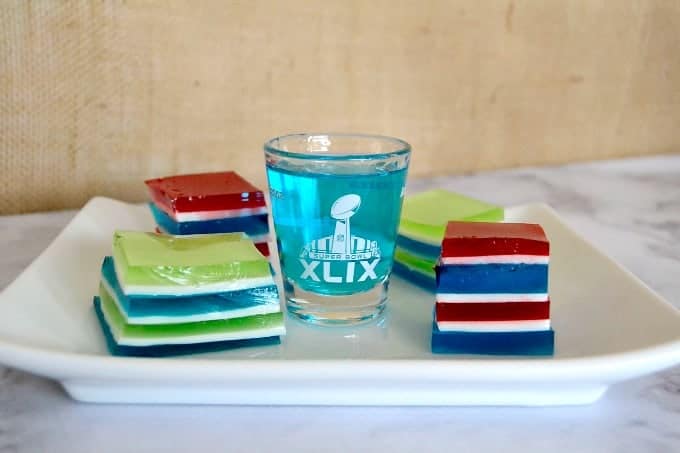 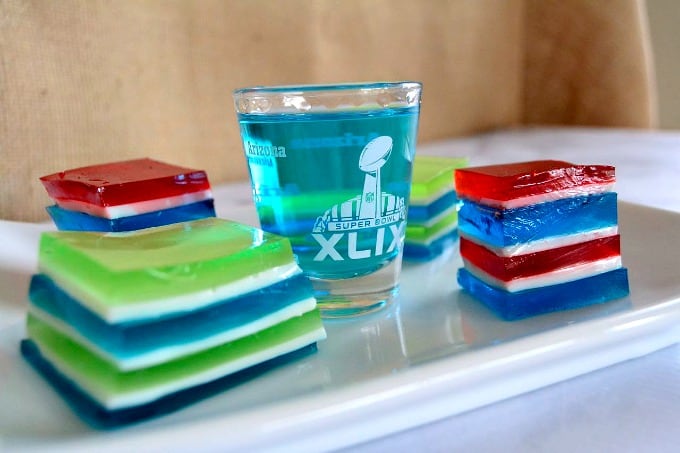 As if you didn’t already know, something special is happening this Sunday.

I’m sure I’ve already talked about it ad nauseam because our beloved Patriots are playing, but you can never have enough food or goodies for the party, so here I am again!
And of course, I have a food blog, and that’s what I do! 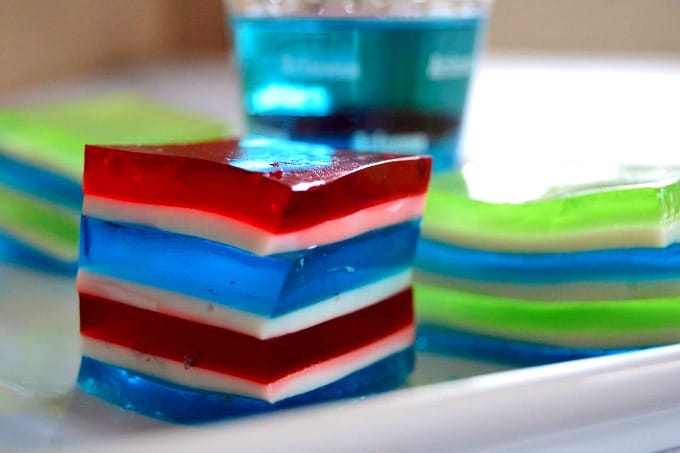 I made these Deflated Footballs out of chocolate that would look cute on cupcakes or even eaten alone, and now I’ve made these team-colored jelly (jello) shots to add to the festivities. 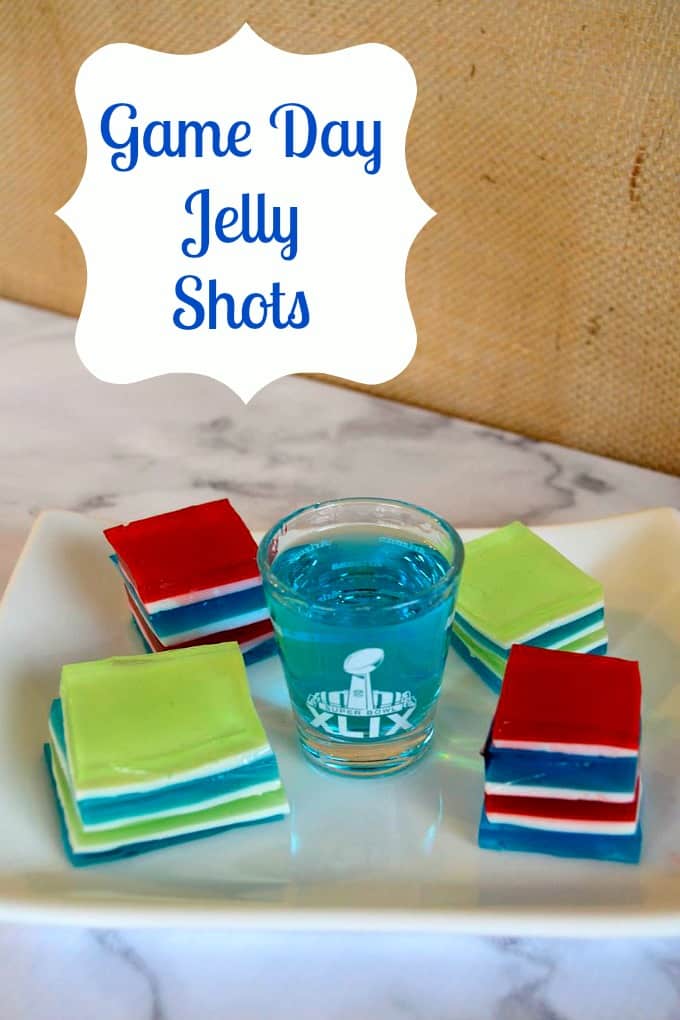 They’re pretty potent, so be careful in your consumption and by all means, do NOT leave them within reach of the youngin’s who will be in attendance. They’ll be knocked on their keisters!
If you want to make them without the alcohol, then, by all means, do that. All you need to do is substitute the vodka with water. No biggie. 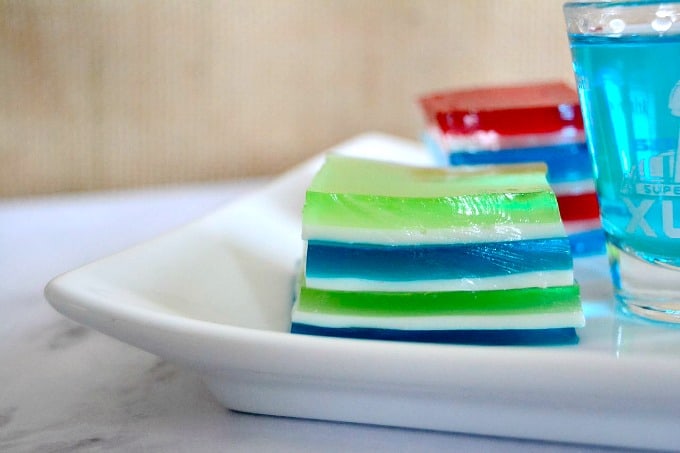 It may be necessary to return the gelatins to liquid form if they should thicken during assembly. Reheat pans on low or by placing bowl of white gelatin into some warm / hot water.
It is important that all gelatin is at room temperature when adding layers to the pan so that it doesn't melt the layer below it.
It also may be necessary to spread each layer of gelatin with an offset spatula as the pans become colder towards the end of assembly.
The cherry gelatin can be substituted with watermelon, just be sure to replace the vodka with the appropriate flavor as well.
To remove from the pans, sit in warm water for a minute or two. Cut into squares and remove with an offset spatula. Place the shots on a refrigerated plate and keep in refrigerator until serving. These are best passed around as opposed to being set out on a table.

So, the photo shoot is suddenly over when I accidentally spill the vodka shot into the plate. Oh well. Time to clean up my mess. 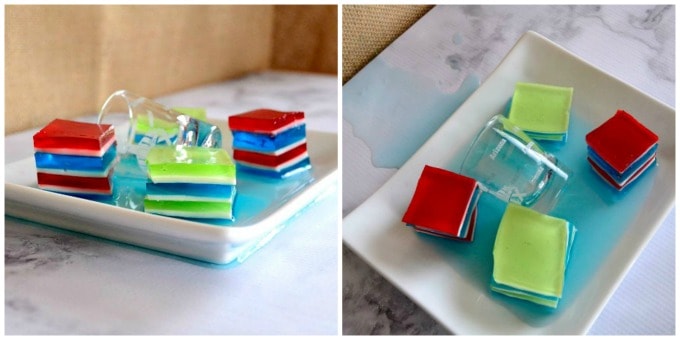 I tell ya, these things are pretty strong, but they sure are fun!
I rate everything I make on a scale of 1 – 4 with 4 being the best and these Game Day Jelly Shots earned 3 rolling pins.
Unfortunately, the Patriots cherry shot wasn’t up to par with the rest. It tasted like cough syrup and I was disgusted. I highly suggest using the watermelon.

I think that would be a great flavor. It may not be as dark as the cherry gelatin, but it would probably taste better.
Who knows, maybe you like cough syrup and they’ll be fine for you and your guests. If you want the colors to be a bit more prominent as well, feel free to add one to two drops of food coloring to each of them.

Have fun this Sunday, but be sure to consume these Game Day Jelly Shots and all alcohol responsibly! And most importantly, PLEASE DO NOT DRINK AND DRIVE!!!

If you like these Game Day Jelly Shots or want some more jelly fun without the alcohol, then you’re sure to love these… 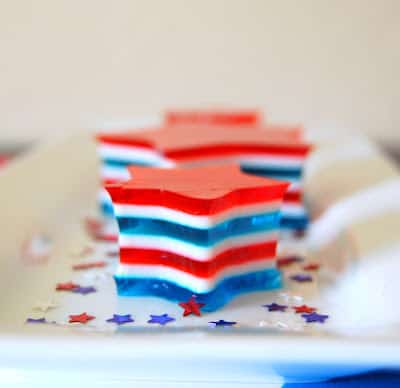