(Just so you know, I’m having font issues. I wanted to use a different font for the recipe, but it is a heck of a lot smaller than I’d like it to be because I can barely read it. I attempted to fix it, but have not had much luck because it just reverts to what I originally used. Now I’m frustrated and I’m going to bed.)
P90X this morning – the cardio DVD. Well, after I became motivated enough to do it and stopped putting it off, I started it around 11:00, but it was technically still morning. At times, I wasn’t really enjoying myself, especially the two times I really thought I was going to pass out. Seriously. I have to admit though, I am very glad that I did it. Now I could use a nap.

Tonight’s dinner is from The New Doubleday Cookbook, p.176; authors, Jean Anderson and Elaine Hanna; publisher, Doubleday, a division of Random House; ISBN 0-385-19577-X.
I make this dish at least two, if not three times a month. The family likes it a lot, especially the two boys (my husband and son) because it is a really good meat and potatoes dish.
I found this on http://www.whatscookingamerica.net/ regarding the history of the Shepherd’s Pie in the 17th century,

Preheat oven to 400ºF. Saute onion and green pepper in drippings in a large skillet over moderate heat 10 minutes until onion is golden. Add beef and saute, breaking meat up with a spoon, about 10 minutes, until lightly browned; drain off fat as it accumulates.

Dissolve bouillon cube in water, add to cornstarch mixture, then stir into skillet along with salt, pepper and steak sauce. Heat, stirring, 1-2 minutes. Spoon into an ungreased 1½-quart casserole, 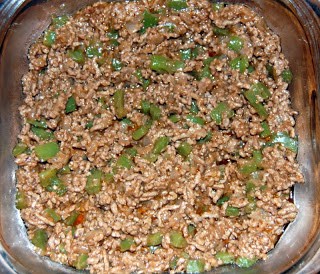 spread potatoes over surface and roughen with a fork. 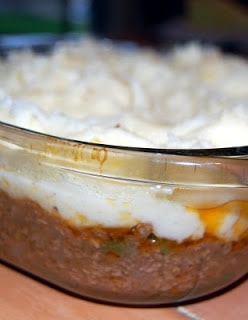 (Note:  Recipe may be prepared to this point ahead of time, cool, cover, and chill. Bring to room temperature before proceeding.)
Bake, uncovered, 25-30 minutes, then broil 4″ from heat 2-3 minutes to brown. 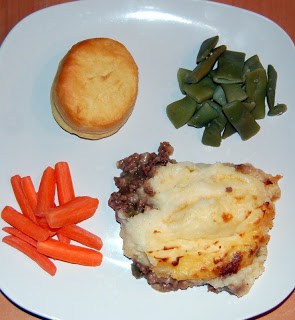 I confess. That biscuit you see on the plate is not something I baked. I feel very guilty about that because I’m doing a baking blog and I go out and by Pillsbury Grands. I had a recipe out so that I could make some homemade biscuits, but then I started digging through my coupons and planning today’s shopping trip and that took longer than I expected. It was well worth it though;  I went to the store with $111.00 cash and my total came to $112.41, so I had to use my debit for that $1.41. I saved $158.09 – 59%! I suppose this could’ve gone on my couponing page, but I’m here, so this is where it is.
I have to say that the pictures don’t really do the dinner justice. It is a lot tastier than it appears to be. I like to add about a 1½ tablespoons of A1 Steak Sauce even though it only calls for 1. It definitely adds more flavor. I also put about 3/4 cup shredded cheddar/monterey cheese into the potatoes when I’m seasoning those. It was greasier tonight; more so than usual because I mistakenly picked up 85% lean ground beef instead of the 90%-95% I normally buy.
I have a rating system of 1-4 with 4 being the best. The rating for the Shepherd’s Pie:  3½ rolling pins. There is never that much of this left over when I make it, but if there happens to be, it’s even better the next day as leftovers.
Happy baking!
4shares