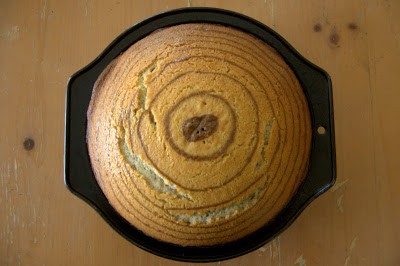 No, it’s not a cake made to celebrate a zebra’s birthday. Although I suppose there’s a zebra somewhere celebrating a birthday.
This is a cake when cut, looks like a zebra on the inside!
How cool is that?!
As long as it doesn’t smell like one, we’re ok.

I didn’t bake yesterday.
I brought our eldest back to college to finish her sophomore year.
Yes, they’re all back to school and we can resume our regularly scheduled programming.

I must say though, it was an absolutely WONDERFUL break – some pretty awesome quality family time!!
We were able to fly back to Massachusetts/Rhode Island and spend Christmas Eve/Day and a few days following with extended family.
It was pretty darn spectacular. After all it has been a good ten years since we’ve celebrated Christmas with everyone on Mr. 365’s side of the family.
Great times were had by all and the cousins were able to reconnect which is always a huge plus.
We were also able to see my husband’s cousins and their kids whom we haven’t seen in about 15 years! It was amazing, babies had all grown up, some kids were back from college for break and the adults were able to catch up after YEARS of little or no contact.
We were able to share some extra special time with close friends who had become like family when our kids were little. All of the kids were nervous at first after not seeing each other for a few years, but in just a little while they all started smiling and laughing. It SO made my heart swell with JOY!!
Actually, the whole vacation did.
It was such a blessing to reconnect with everyone and definitely made us realize once again, that there is nothing like family, even friends as close as family.
There I go again, rambling. Haha
I think the best part of having all 3 of our kids home this time was that they spent some good. quality time with each other, running errands, just sitting here at home talking or playing games together.

It was more difficult than I thought it would be dropping our daughter off at her dorm yesterday, and I know it was because the break had been so good to all of us.
We all made the most of it and received such love in return.

So now, back to a routine – Mr. 365 working, kids at school, homework and projects to be done, track practice has started, I’ll continue to bake for the next 52 days before I start something else, and we’ll prepare ourselves for another high school graduation in May.

I saw a picture on Pinterest, and followed it to Baking Bites and adapted it.
Zebra Cake – makes one 9-inch cake

Preheat oven to 350 degrees F.
Prepare a 9-inch round cake pan by lining the bottom with parchment and greasing the paper and sides.
In a medium bowl, combine flour, baking powder and salt.
In a mixing bowl fitted with the wire whisk, combine the eggs and sugar, beating until mixture is light and fuffy, and sugar is practically dissolved. 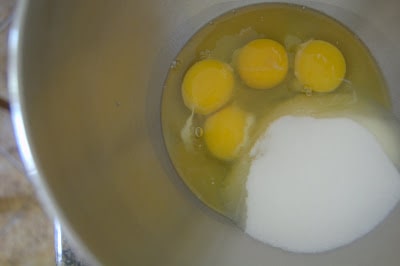 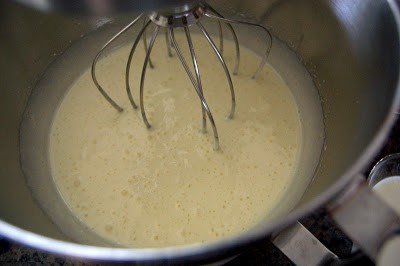 Mix in milk, vegetable oil, vanilla and almond extracts.
Gradually add the flour mixture and mix til combined.
Into a medium bowl, pour two cups of batter. Sift the cocoa powder into this bowl and thoroughly whisk in. 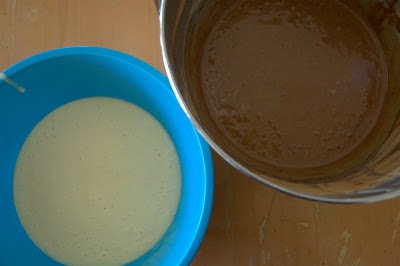 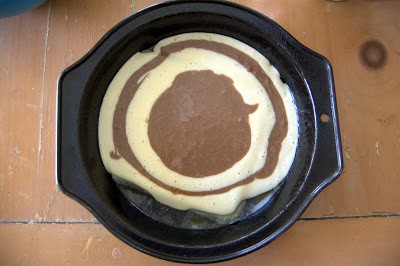 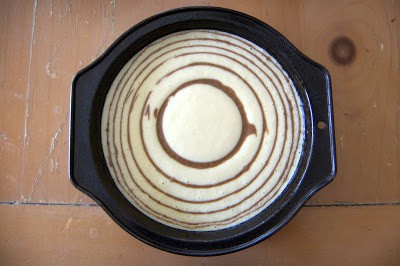 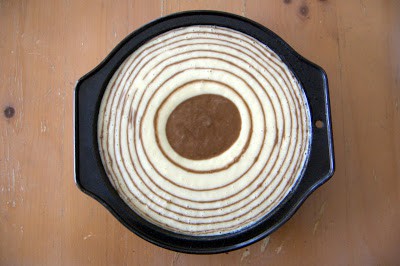 Repeat the process by alternating with the batters until nothing remains.
As each batter is added to the center, the outer edges will spread to the outside of the pan.
Bake for 40 minutes or until the cake is golden and a cake tester or toothpick is inserted into the middle and comes out clean.
Allow cake to cool in pan on a wire rack for 15 minutes.
Invert pan onto a large plate and remove the parchment. Place plate onto top (which is really the bottom) of the cake and turn upright. 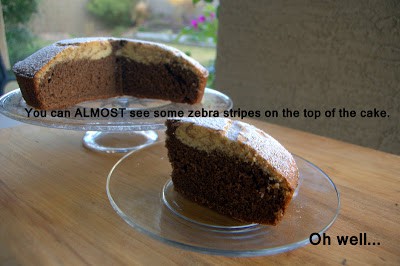 As my daughter would say, Epic Fail!

DON”T do what I did. and put the cocoa powder into the original mixing bowl, put it into the bowl with the 2 cups of batter.
I wanted more chocolate in my cake, so I added 1/2 tablespoon more cocoa than the recipe called for and mixed it into the bowl which I thought had more batter.
BIG mistake as you can tell.
Follow the recipe at Baking Bites, and hopefully it will turn out much better than mine did.
It tasted ok, but I wasn’t nuts about having a whole cup of oil in my cake either.

I rate everything I bake on a scale of 1-4 with 4 being the best and this Zebra Cake can be fed to the animals. I’m giving it 2 rolling pins. It was ok for taste (I’ve had better tasting cakes), and it was moist, but gets a big fat GOOSE EGG for presentation!
I also had to leave it in the oven for an additional 15 minutes because it wasn’t completely setting in the middle, so I was becoming quite concerned that it was going to burn on the outside.
Just plain aggravating!

But I still love my life!!