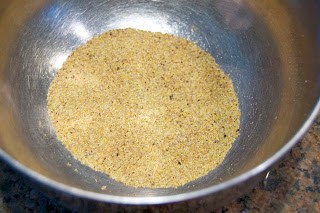 Cut chicken into 1/2-inch cubes and put into bowl.
Toss chicken in spices so that it is completely covered. 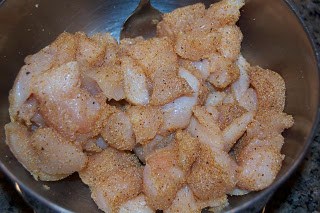 Heat olive oil in large skillet over medium high heat. Add chicken followed by garlic and onion.
Continue cooking til chicken is browned on all sides, about 6-7 minutes.
Place a tortilla on a plate and spread 1/4 cup of the refried beans over it.
Put tortilla in 8-inch spring-form pan.
Cover tortilla with 1/3 of the chicken. Spread so that it is evenly distributed. 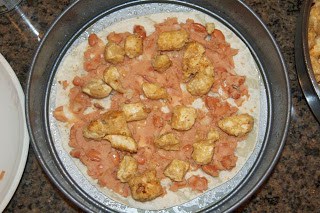 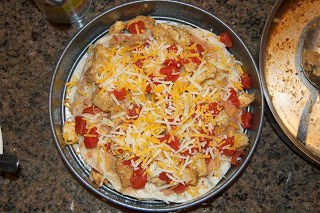 Cover with final tortilla, and sprinkle with remaining cheese.
Place pan in oven and bake for 25-30 minutes.
Remove from oven and transfer to a wire rack.
Release the spring-form and remove the sides.
Sprinkle with cilantro and serve. 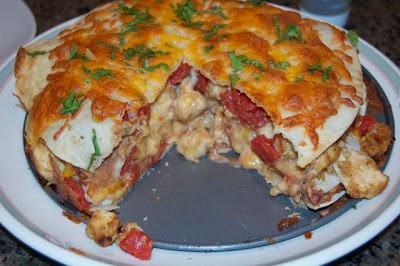 I should have added the cilantro to each layer instead of using it as a garnish, but I forgot I had it in the fridge until I went into the drawer for a cucumber. I think it would have added some nice flavor to it.
Also, this would probably be really good with two finely diced jalapenos with seeds removed. I just didn’t add them because we’ve had some pretty spicy things lately, so I decided I’d give the family a break.
My husband said I could make this again. He and I really liked it, especially the way the chicken was spiced. The kids had various complaints about it though, one doesn’t like tomatoes and another doesn’t like the refried beans.
I rate everything I bake on a scale of 1-4 with 4 being the best. This chicken tortilla bake earned 3 1/2 rolling pins. I will definitely make this again.
Happy baking!
2shares