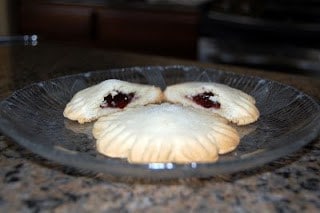 15shares
Memories of Grandma… I was originally born in Rhode Island, but we lived in New York and Illinois while I was growing up. My four grandparents have always been a huge part of my life. Since I was the first grandchild on both sides until I was about 8 years old and, in addition to being an only child,  I guess you could say I was completely spoiled. When we lived in Illinois, I would fly back and spend every summer with my mother’s parents so my mother could work and my father could go to school. Looking back now, it was during these summers that my love for food flourished.

My grandparents had wild blueberry bushes growing on the hill up behind their house and a big beautiful garden, so there was never a shortage of fresh vegetables. My grandfather and I, aka, his “little cucumber” would go out to the garden each day when he returned home from work to pick things for dinner or to bring in the excess so that Grandma could do her canning. I never ate so well as I did during those summers; griddlecakes, doughboys, lemon meringue pie, chicken cacciatore, three bean salad, Italian bread, spaghetti and meatballs, chocolate cream pie, cream cheese cookies, liver and onions (ok, THAT I never ate, but my grandfather loved it!), hot dogs and beans with brown bread (from a can!), and my absolute favorite, her jam-filled sugar cookies.
There were so many wonderful things she made that I liked, but those cookies hold a very special place in my heart which is why I have never attempted to recreate them. I knew it would be tough to make them like Grandma did. And she knew they were my favorites. She didn’t bake them that often and come to think of it, I never did see her make them – they always seemed to magically appear. She said they took her the longest time to make out of anything she did, but I never really understood why until today. I didn’t have the recipe she used, so I may have been missing a couple of steps and I am really hoping my aunt has it so that I can do this again. Grandma also had this cookie cutter that she never used for anything else but those cookies. 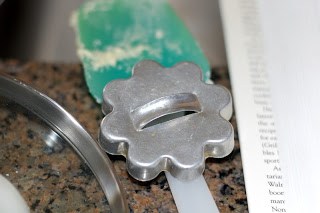 When she died 21 years ago, we were cleaning out her house, and I found it tucked away in the drawer. Through seven moves through three different states I have kept that cookie cutter, and have not wanted to part with it. It represents a part of my childhood that I never want to let go of. That piece of metal, which is probably over 50 years old, is so much more than the shape it makes in the dough; it is the hours she would spend knitting while watching “her” Red Sox and drinking a Narragansett Beer from a glass, the card games we’d play, the way she would scream and shake her arms in the air when I’d accidentally scare her, our story times, the warmth of her kitchen, and the unconditional love that she showered me with. It is her. And everything about her.
While the cookies I made today were quite delicious, they weren’t anything close to what I remembered. I think she rolled her’s thinner than the suggested ¼ inch thickness and definitely added less jam than the ¼ teaspoon I did. The recipe here says to spread it around the cookie, but Grandma only had the grape jelly in the middle and would sprinkle the tops with a little sugar. It also made only 16 cookies, so it you’re wanting to make more, double the recipe. I also baked them much longer than the 12 minutes at 325ºF, probably 12-15 minutes more because it took them a while to brown.

Preheat the oven to 350ºF. Cream the butter, then gradually add the sugar, beating until light. Add the egg, vanilla and cream or milk (I used milk.), and beat thoroughly.

Mix the flour, salt, and baking powder together, add to the first mixture, and blend well. Arrange by teaspoonfuls on cookie sheets, 1 inch apart. Bake for 8-10 minutes or until lightly browned.
Filled Sugar Cookies. Add about ¼ cup flour to the dough, just enough so that it can be rolled out. Roll ¼ inch thick and cut into 3-inch circles. 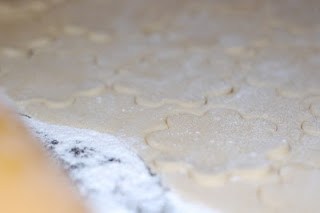 Spread half the circles with jam, jelly, mincemeat or fruit and nut filling.

Cover with the remaining circles and press the edges together with a fork. Prick well. Bake on buttered cookie sheets in a preheated 325ºF oven until lightly browned, about 12 minutes.

I’m going to keep trying, but some things are just not meant to be recreated. I think this may be one of those things
Happy baking!
15shares