Baked Cinnamon Pear Slices – Pear slices sprinkled with fresh lemon juice, cinnamon and some sugar then baked in the oven until dry and crisp. A great after-school snack. 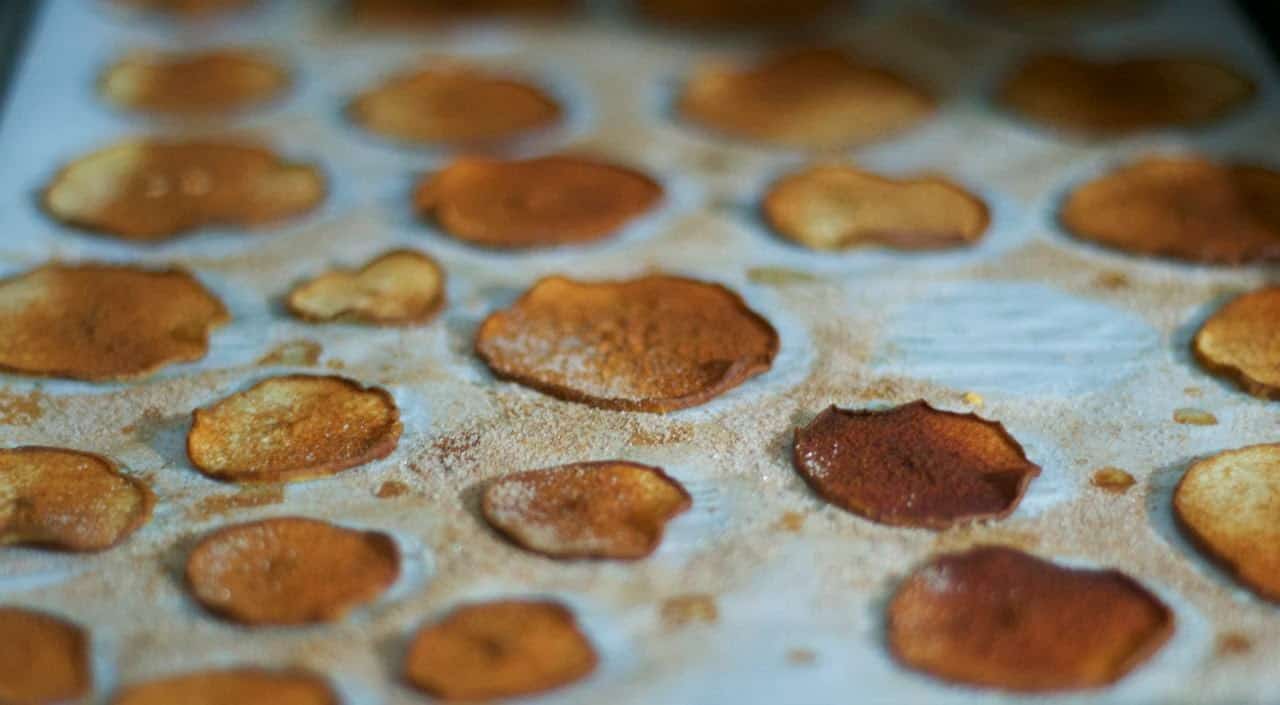 There’s nothing like waiting until almost the very last minute of the day to bake. Honestly, and I know you’re probably sick of hearing this because I’ve been saying it practically every day in every post, I just didn’t feel like baking today.

SAVE THIS BAKED PEAR RECIPE TO YOUR FAVORITE PINTEREST BOARD! 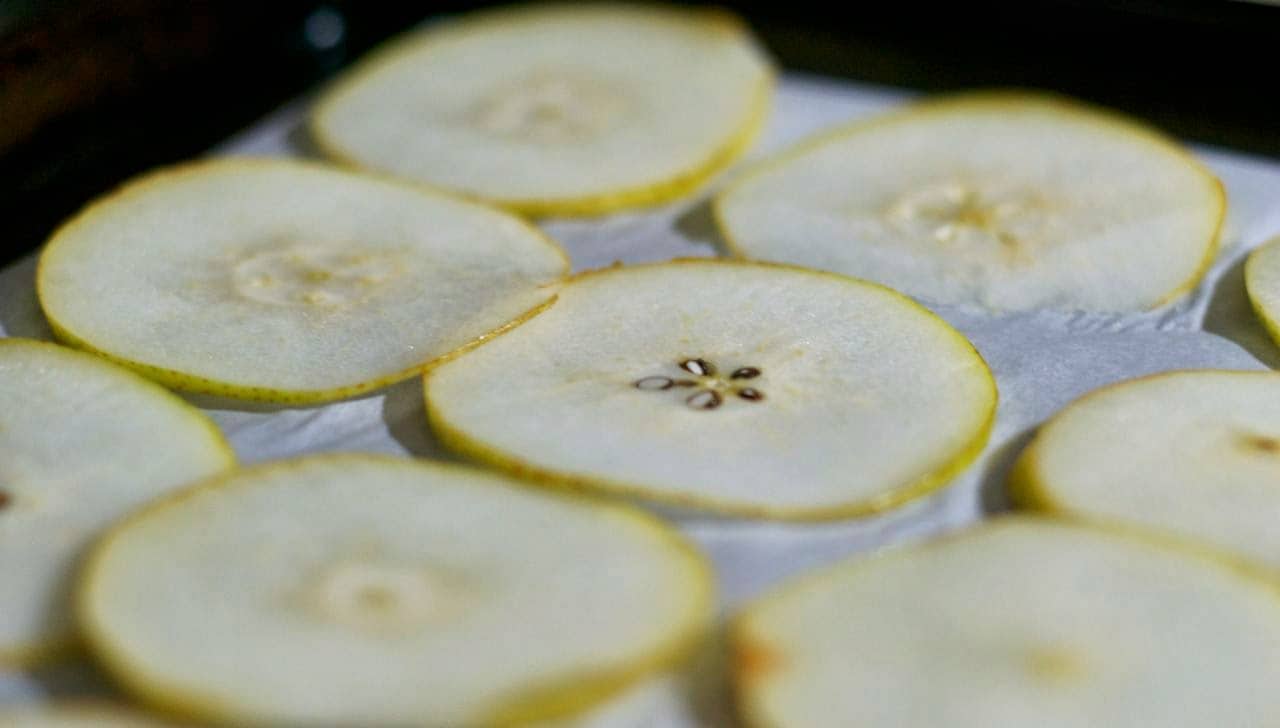 Obviously, I put it off as long as possible today, having worked a couple hours longer than expected and then made French Toast for an easy dinner.

The good news… I’ve turned the corner and feel SO much better than I have been the past few days!! Still coughing a little, but I’m SO excited that I’m FINALLY almost over this bad boy!!! AND I have the day off tomorrow!!! 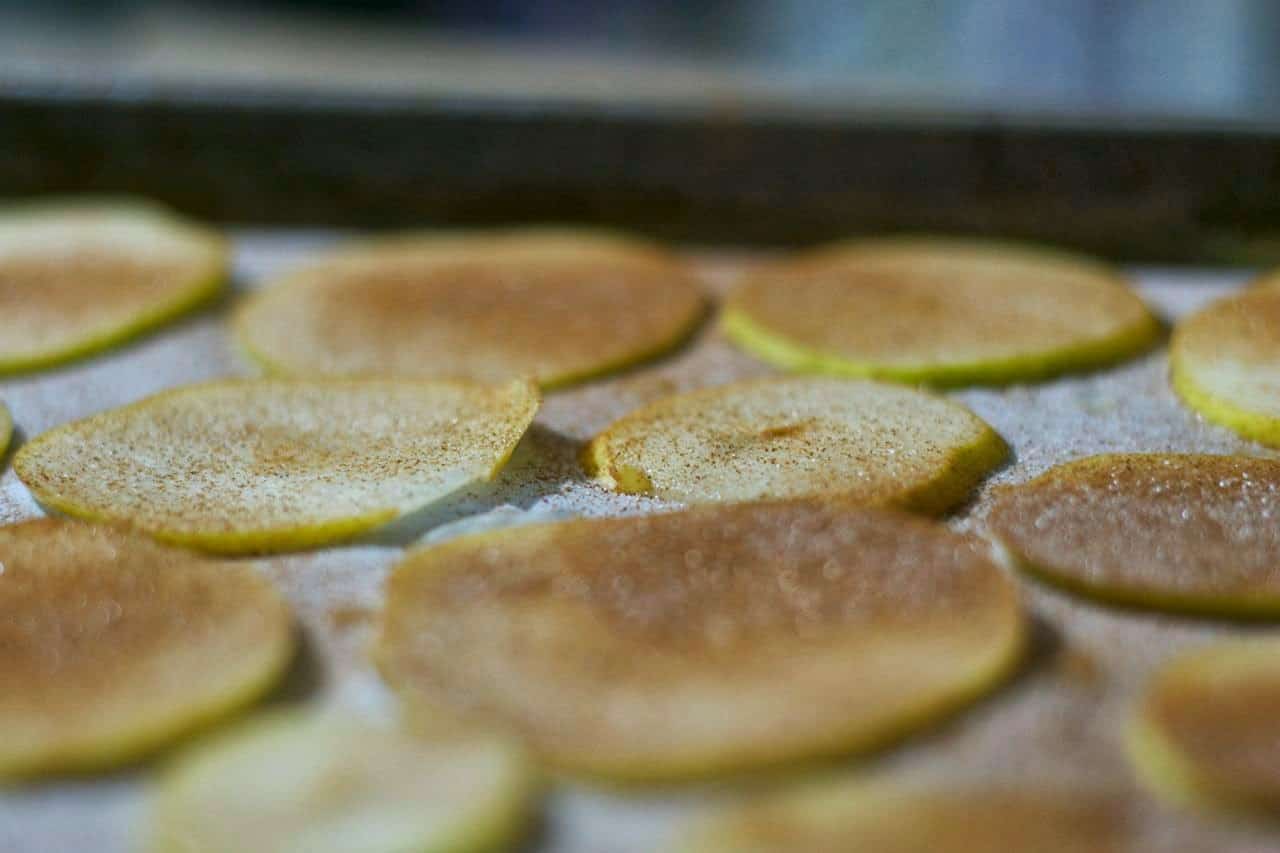 I AM SLEEPIN’ IN!!!! sorry for yelling, I’m just really, really ecstatic that I don’t have to get up to the alarm in the morning. YeeHa!!

So, after work I stopped at the store and was looking around trying to figure out what I was going to bake, knowing that time was of the essence (yeah, it’s now 10:14 and I’m waiting for these puppies to come out of the oven haha) and there would be lack of natural light with which to take the pictures. I spotted some pears and thought BINGO!

Or at least I hope bingo. I thought since I’d baked cinnamon apple slices for my last go-round and they were delicious that pear slices probably would be, too. They certainly do smell pretty good. 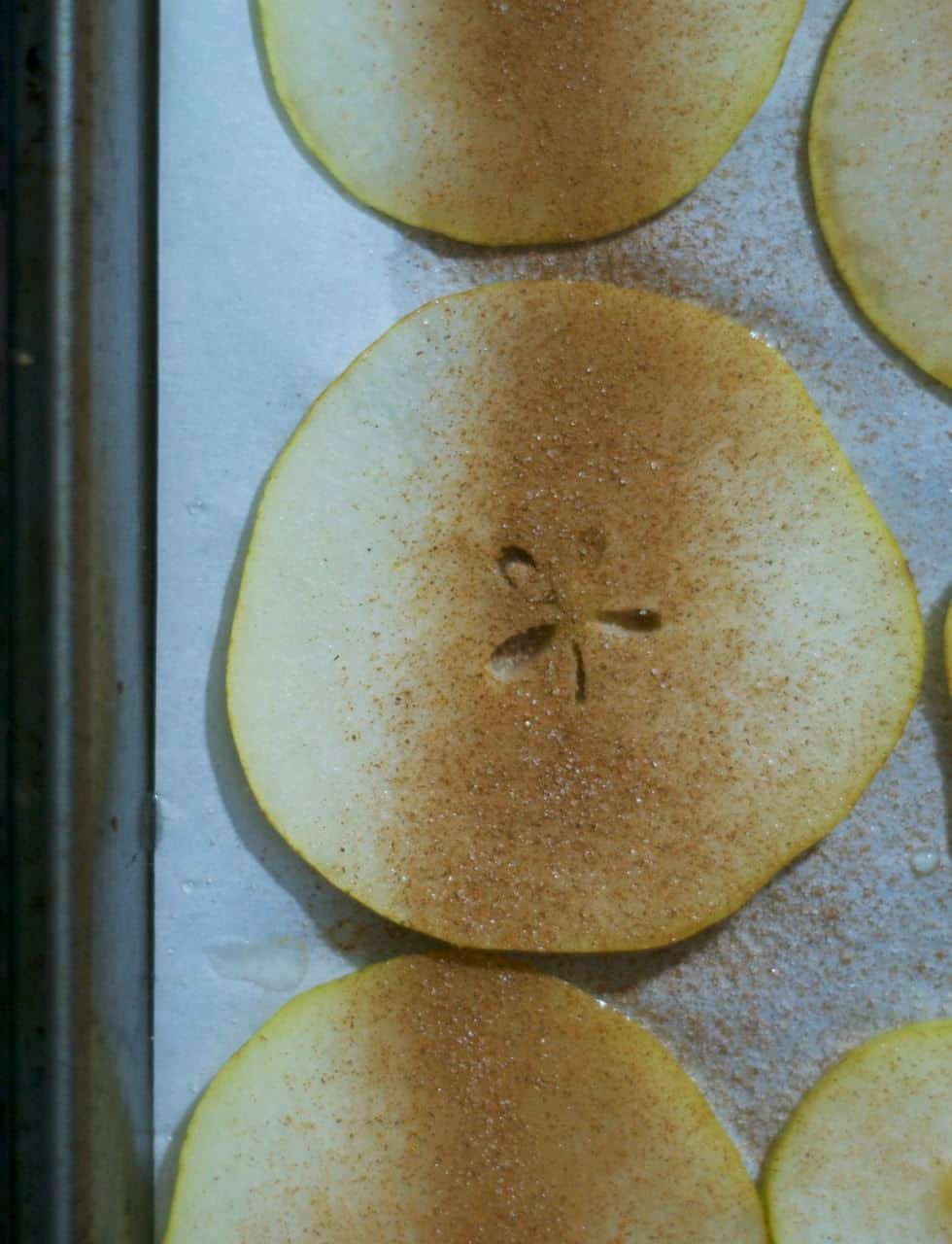 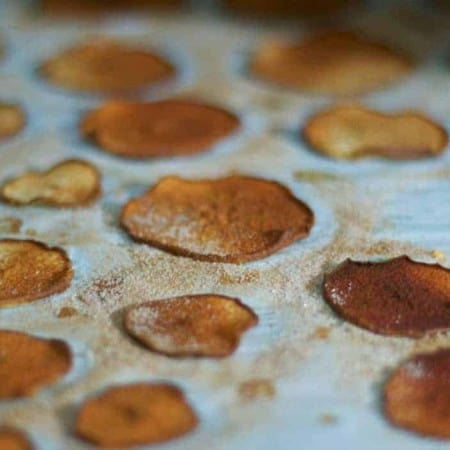 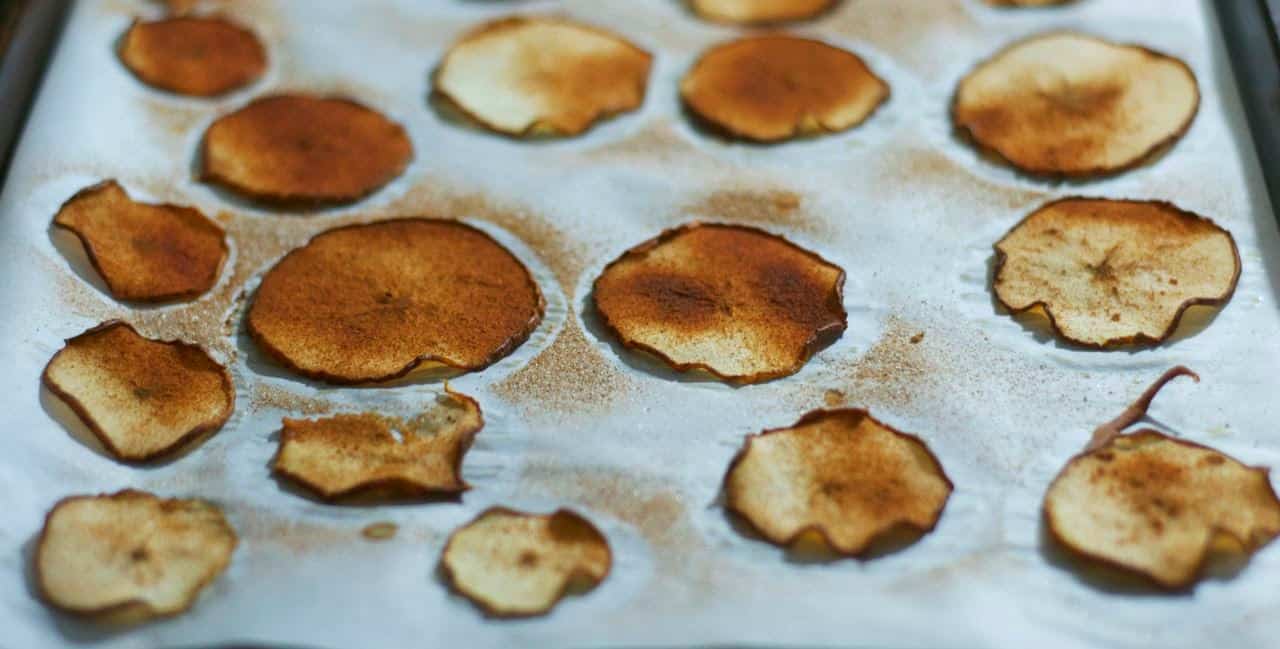 I was going to core the pears before I sliced them then I figured, ah, what the heck. A few seeds and some core never killed anyone. Well, at least not to my knowledge anyway. Besides, we can always eat around the core and throw that part away. Or plant it and see if it starts to grow. haha

I rate everything I bake on a scale of 1-4 with 4 being the best and these Baked Cinnamon Pear Slices earned 3 1/2 rolling pins. I just took them out of the oven and although they weren’t crisp, they were pretty doggone tasty IF I do say so myself. They weren’t completely crisp, so I’m turning the oven off, going to bed at 11:59 and keeping them in there to see if they should harden a bit before morning. I’ll let you know.

Ok, no more chit chat. I have 14 minutes to edit final pictures which I believe aren’t going to be that great because I took my contacts out and don’t see as well with my glasses in, so I couldn’t tell if those pictures were in focus! haha 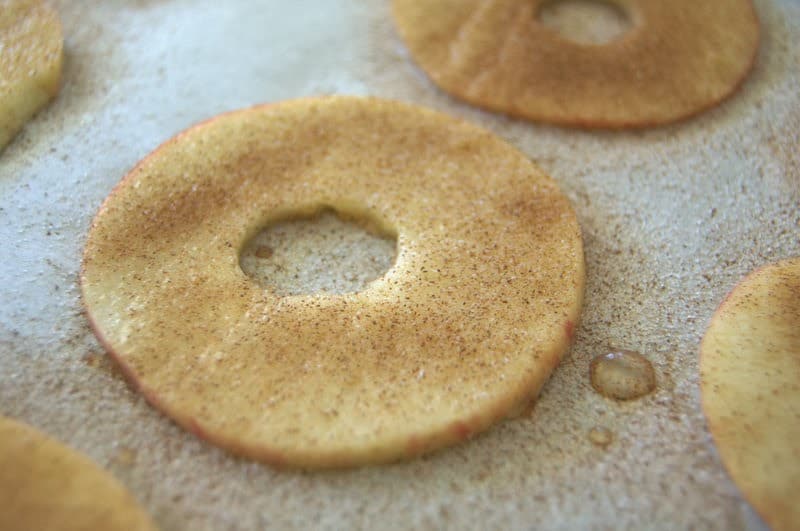