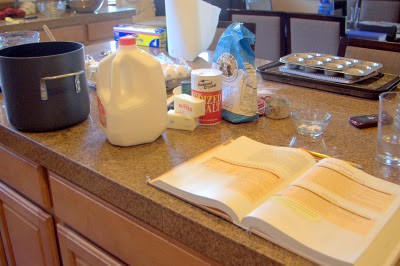 This title could be read two different ways.
The first would be two BIG baking days until Thanksgiving, and I know some of you are doing just that.
I, on the other hand, have yet to begin my Thanksgiving baking for reason of the second title interpretation.
Yesterday and today were my BIG baking days.
And when I say BIG, I mean I have never baked so many things for so many people at one time.
But, I didn’t do it all myself, and I was very fortunate to be able to work with a professional baker!
SO MUCH FUN!!!
Marlena and I both have sons on the high school cross country team. Hers is a sophomore who is the top runner on the team and mine is a freshman who ran varsity.
She is a professional with a pastry degree, has worked in one of the top bakeries in the state, and does absolutely beautiful work!
For the end of the year cross country banquet, the coach had asked if she would make the desserts. She accepted and when she saw I had a baking blog, asked if I would want to help.
I jumped at the chance. And I am very glad I did!
It was an awesome experience, I learned a lot and it was a pleasure getting to know Marlena.
We started yesterday morning at 9am and baked until about 1pm. Today we started at 9:30am and worked until 2pm. Or at least, those were my hours. We did all the baking at Marlena’s house, so she put in some additional hours last night and this morning.
We were baking for over 145 people.
I’ve never made food for more than maybe 20.
Following are pictures of what we did.
I focused on the eclairs, but unfortunately cannot print out the recipe for copyright reasons, but it’s in that book you see sitting on the counter. 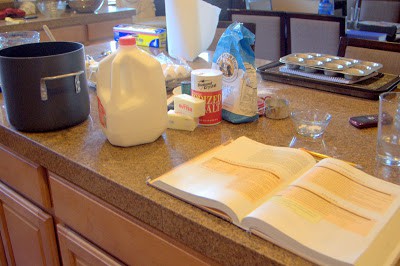 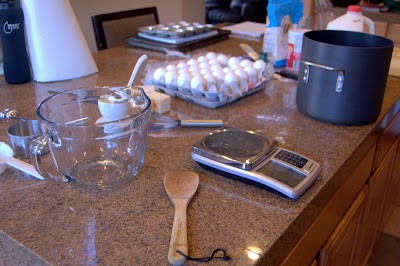 Bringing the liquid (milk and water), butter and salt to a rolling boil. 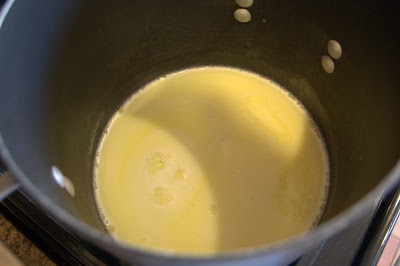 Removing the pan from the heat and stirring in the flour all at once, stirring until  the dough forms a ball and leaves a slight doughy residue on the bottom. 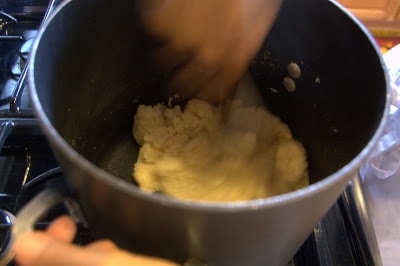 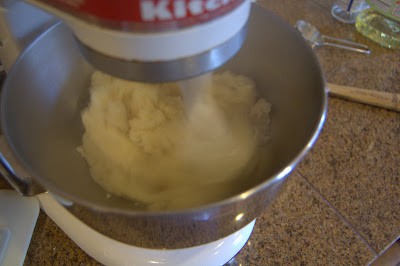 Transferred to a mixing bowl and mixed with the paddle attachment until it has cooled to a temperature between 110 degrees F and 140 degrees F.

LOOK at this handy thing Marlena has!!! It is a thermometer that she purchased at Home Depot. It sends a laser on to the surface of what you’re cooking/baking and gives you a read out! I LOVED it! So handy!
But it obviously won’t read the internal temp. so don’t be using it on your bird Thursday.
It won’t read Tom’s inner temp. 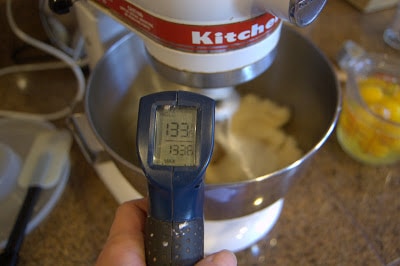 Beat in eggs one at a time until well incorporated. 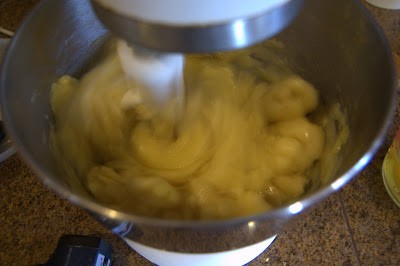 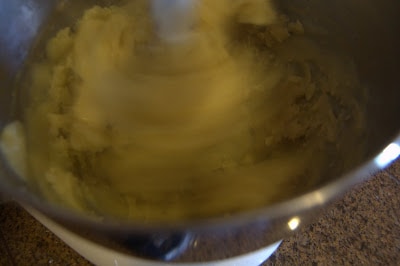 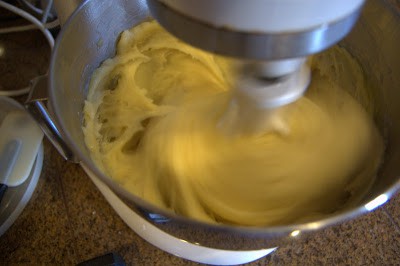 Dough is ready to use Marlena said when it drips or rather plops off the paddle attachment into a perfectly shaped V.
Not ready. 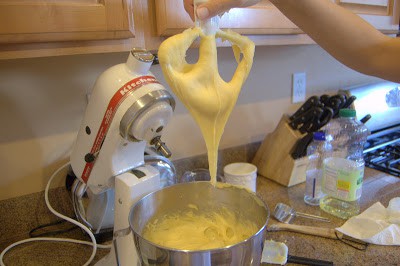 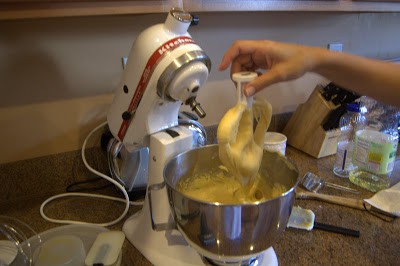 Try again after a little more mixing. Might need another egg. 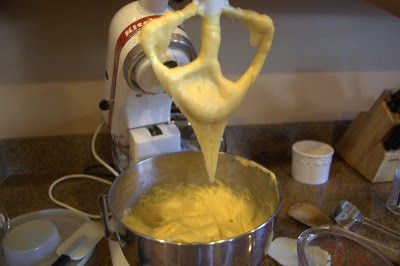 Ready to be put into piping bags… 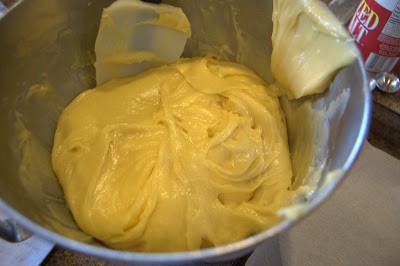 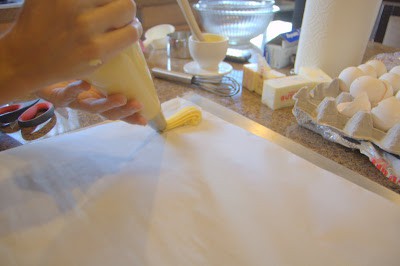 Marlena’s a pro.
Me, not so much. I’m just needing more practice is all.
I had baker envy these past two days and it made me want to go to pastry school.

Piping out the eclair shells. 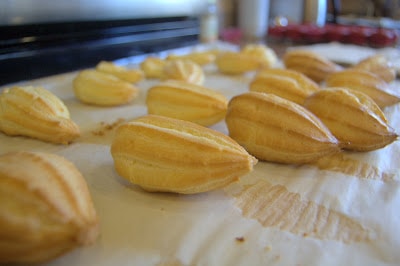 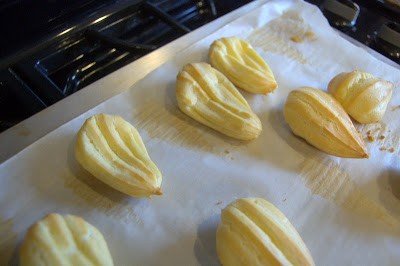 These fellars had no desire to puff up like their counterparts. They knew the demise that awaited them, so they collapsed under the pressure. 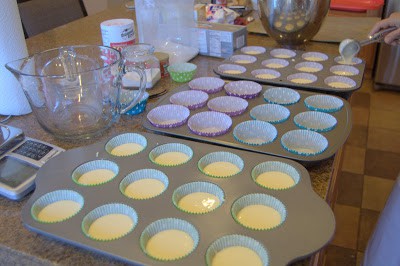 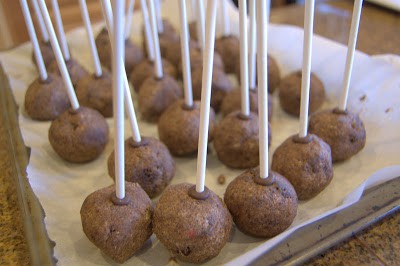 These cake pops were absolutely the best I’ve ever tasted!!!
Ok, so it’s only the third cake pop I have ever had, but it was by far, the best.
Shhhhh…this chocolate cake mixed with a very special buttercream is a secret!!!
I couldn’t even wrestle it from Marlena.
I didn’t try, but I really want to eat those things again.
I need more experience with cake pops. I tried to frost them and I lost one off the stick and almost lost another one, so Marlena took over for me. 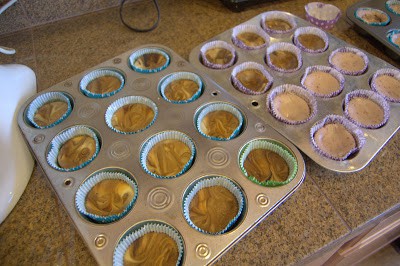 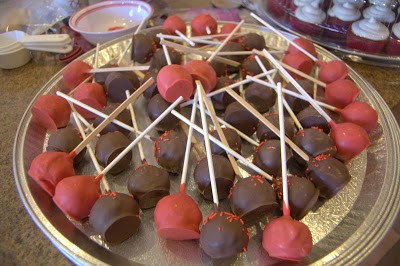 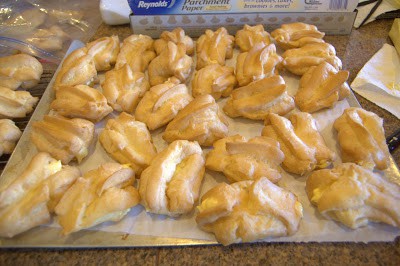 Eclair shells filled with milk infused with a vanilla bean, cream and vanilla pudding.
To. Die. For.

Oh yeah.
And then topped with a chocolate ganache. 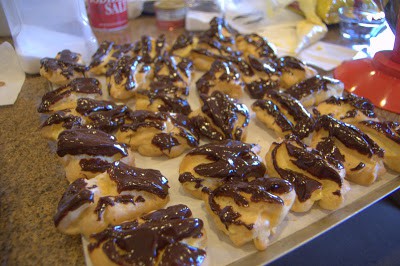 The set-up at the high school cafeteria.
It wasn’t an elaborate display, but those who were wanting the desserts didn’t care! 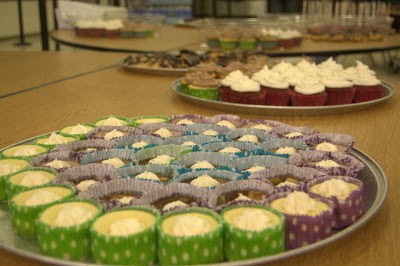 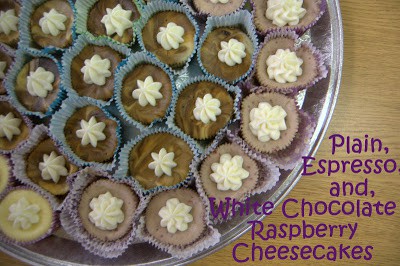 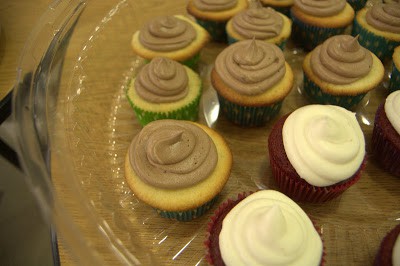 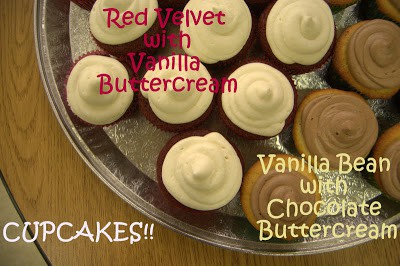 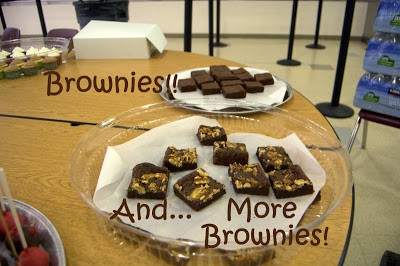 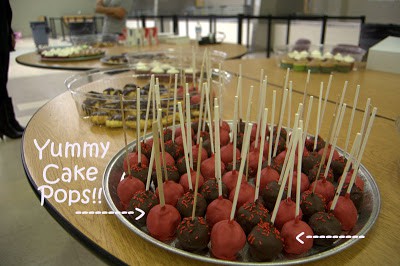 Wow!!! THAT was A LOT of baking!!!
Thank you, Marlena!! It was wonderful experience!!

We’ll be doing it again come Spring for the track and field banquet.
And that will be for many more people than 145 because that team is always a bigger one.

I hope everyone’s preparations for Thanksgiving are going smoothly and that enough preparations have been done ahead of time so that it’s not a crazy day on Thursday and you will be able to relax.
Don’t forget to have people HELP you.
Especially in the clean-up.
If you’ve done most of the cooking, enlist others to help in the setting up and taking down.
Enjoy the day.
Play some football.
Watch some football.
Talk with the ladies.
Snuggle with the kids.
Give hugs and love, laugh hard, and enjoy each and every moment you have with your family and friends!
I hope you all have a blessed and most wonderful Thanksgiving!