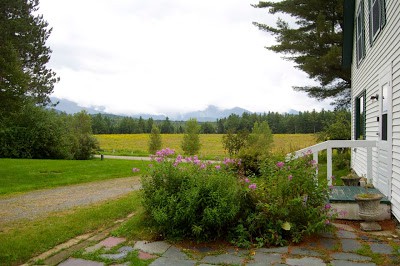 Cell phone service and the Internet are hit or miss – when attempting to write a post late at night, I have to write it down on a good ol’ piece of paper with a pen. Then I get a hand cramp.

If you want to contact me, you might want to consider using snail mail because of the above.
I jest, it’s not really that bad, just completely frustrating.

New Hampshire is very green. New Hampshire has many mountains.
I know the Green Mountain state is right next door, but you gotta give this state some credit. 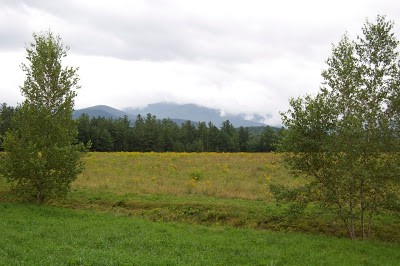 Many people who live here think that “true New Hampshire” starts north of “The Notch” (Franconia Notch State Park) and anything south of that is just “North Boston”.

The “Old Man In the Mountain”, a natural rock formation carved by glaciers, was first discovered in 1805 and sadly fell out of the mountain on May 3, 2003. He had become the state emblem in 1945 and you can find him on the state license plates and New Hampshire quarters. Poor guy.
I never did get a chance to see him, but when we arrived and I’d heard he’d fallen, I was extremely heart broken.

Keeping up with the Joneses is not nearly as important out here as it was in the southwest and next summer I know I’m not going to be surprised by whose boobs are bigger at the community pool. Not only because there isn’t one, but because the money they would have spent on the job, was probably used for snow plow services over the winter.

There are a lot of natural wonders here in New Hampshire ~ the Flume Gorge, the Basin, and Mt. Washington just to name a few. I wonder if I’ll be able to see them all.

Our son is now a proud member of his favorite team, the Patriots. Granted it isn’t the New England Patriots, but his school mascot has the same logo and he’s on the golf team.

I have to say, it sure does beat being a North Kingstown High School Skipper though.
The “Kancamangus Highway” does NOT have an “N” in between the A and the G, and is correctly spelled, K-A-N-C-A-M-A-G-U-S. Geez! It is commonly referred to as “the Kanc” though, so say it that way if you don’t want people to know you ain’t from around these here parts.

At any time you can see a bear or a moose. Still have yet to see the moose, but we saw a bear 10 min. we arrived here in town. And here I was thinking it was a REALLY big, black cat. Yes, I need my eyes checked.

We live in a town where there is only a blinking light at the main intersection and the town library has part-time hours.

Once, I “caught an edge” (I swear – wasn’t gettin’ cocky or nothin’) on a fairly even, smooth gradual downhill trail, skied off into the trees, fell flat on my face in the snow.

Oh no, wait. it gets better.

Fall flat on my face, left ski comes up and catches me in the side of the head, Mr. 365 (then said boyfriend) skis up behind and sees blood dribbling into the snow through my hat. Down to First Aid we go. They patched me up and I returned to the slopes. I think.

Another time, Mr. 365 (still said boyfriend) takes me on the ski lift – to the T-O-P of the mountain. Having only skied a few times and one of those being a not so fortunate experience, I wasn’t so happy to discover the only way down would be down a black diamond slope with moguls.