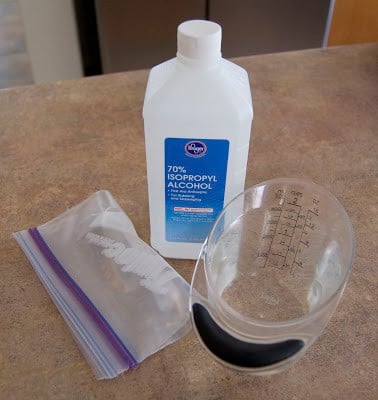 The ice pack to end all ice packs.
Does that even make any sense?
It kinda does.
I mean, you may NEVER need another ice pack again.
Wouldn’t that be nice?!
I mean, tell me I’m not the only one who has ever sat in a chair only to find that after a few minutes some part of your body becomes wet because the person sitting in the chair before you had a leaky ice pack?
Hunh, hunh?!
Tell me it hasn’t happened.

Mr. 365 is famous for putting ice and a little bit of water into a Ziploc bag to make his ice pack which is all well and good
EXCEPT…
That when he puts it into the freezer to “save” it for next time, the bag is broken.
And how do we know the bag has broken?

The bag has broken BECAAAUUUUSSSSEEEE…

When liquid water is cooled, it contracts like one would expect until a temperature of approximately 4 degrees Celsius is reached. After that, it expands slightly until it reaches the freezing point, and then when it freezes it expands by approximately 9%. This unusual behavior has its origin in the structure of the water molecule. There is a strong tendency to form a network of hydrogen bonds, where each hydrogen atom is in a line between two oxygen atoms. This hydrogen bonding tendency gets stronger as the temperature gets lower (because there is less thermal energy to shake the hydrogen bonds out of position). The ice structure is completely hydrogen bonded, and these bonds force the crystalline structure to be very “open”,…It is this open solid structure that causes ice to be less dense than liquid water. That is why ice floats on water, for which we should all be thankful because if water behaved “normally” many bodies of water would freeze solid in the winter, killing all the life within them.
Water’s “density maximum” is a product of the same phenomenon. Close to the freezing point, the water molecules start to arrange locally into ice-like structures. This creates some “openness” in the liquid water, which tends to decrease its density. This is opposed by the normal tendency for cooling to increase the density; it is at approximately 4 degrees Celsius that these opposing tendencies are balanced, producing the density maximum.

From the International Association for the Properties of Water and Steam

Did you ever even know there was such an association???!! Well, I found it! You can sleep peacefully now. You’re welcome.

Anywho, see, plain and simple, and something I think we all probably learned in third grade is that ice, say it with me now, EXPANDS.
E-X-P-A-N-D-S!
Sooooooo, if what is in the bag fits just fine at room temperature, chances are that when you stick that son of a gun into the freezer, the baby is going to grow, therefore busting the seams wide open.
Much similar to when I gain a lot of weight and can’t fit into my jeans.
But that’s a post for another time.

Again and again, I watch as the bag goes into the freezer and onto whatever body part might be in need of an ice pack. Ok, watch it, this IS a family-friendly site, people! Keep it G-rated!!
Again and again, I tell him that he needs to make up a new bag or am constantly handing him new ones to put over said busted bag because I’m SICK of the water leaking.
Sick, I tell you, just plain S-I-C-K.
“It’s only water.”
I hear it time and time again.
Yeah, I know, but you’re not the one who has a snack and drink in each hand ready to get all comfy and snuggle in for the night to watch ‘Chopped’ or ‘Honey Boo Boo’ when a few minutes into the show it hits me.
I’m wet…
I’m cold…
And now,… I’m PISSED!!
SERIOUSLY??!!
Put it right up there with sitting in pee on the toilet seat and you’ve got a woman on the EDGE!!!
And when I’m COLD, everybody knows it!

SOOOOOO, when my daughter discovered that we could make some really cool ice packs ourselves that would mold to our bodies because they’re flexible and would not completely freeze which in plain ol’ English means… THEY DON”T LEAK (hear THAT honey?!), I was ready to give her the WORLD!!! So easy and so very inexpensive, you MUST try it. These have been fantastic and since we’ve made them, they’ve been getting A LOT of use.

Mr. 365 was so very excited the day he pulled one out thinking it was his regular “ice pack” because it was just squishy enough and no longer hard as a rock. He was like a darn kid in a candy store that day, he was.

We found this from diyNatural.

In one of the Ziploc bags, combine the water and alcohol. 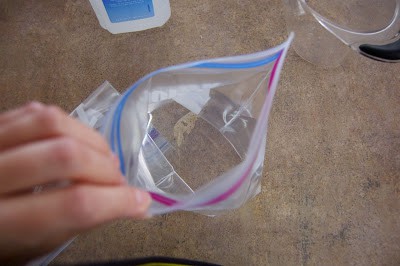 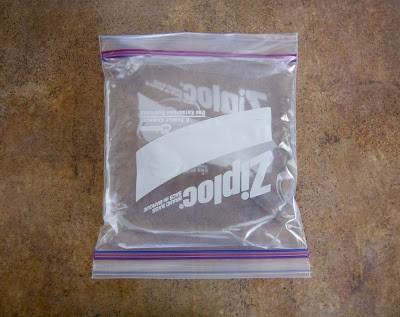 Place into freezer until contents solidifies, about 12 hours. 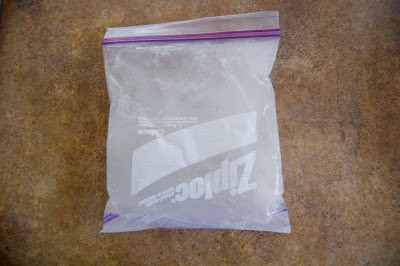 Actually, it won’t completely solidify, it will be slightly mushy, but that’s the moldy goodness of the pack!

If you find that it is too solid, add more alcohol. Too slushy, add more water.

I rate everything I make on a scale of 1 – 4 with 4 being the “bee’s knees” (what the heck does that even mean, anyway, bee’s knees? Rhetorical, I really don’t need an answer. I just like hearing myself type.) and this DIY Homemade Flexible Ice Pack earned 4 rolling pins!
Yessiree Bob, you heard it here, the ice pack to end ALL ice packs!
Inexpensive, flexible, cold, but not frozen, and WILL. NOT. LEAK!
Unless of course, you haven’t completely sealed the bags.
I take no responsibility for that.

The great thing about these, too is that you can use different sized bags, like snack size, sandwich or the larger gallon bags. Just remember to double them up and keep the ratio one part alcohol to two parts water
The 365 family LOVES them. They are the best thing since sliced bread!
Yeah, whatever.
Our daughter has recently started doing triathlons and our son runs for his high school’s cross country team, so these packs have come in very handy with icing the shins and other achy body parts.
And Momma’s happy because there will no longer be any wet seats in the house.
At least not in the living room anyway!