No bread compares to Challah Bread! That outside crunch and soft, warm, and chewy inside will make you question using another type of bread for baking. 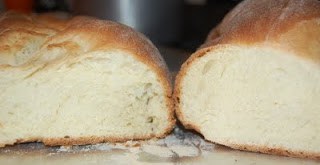 This Challah bread has so many uses,  you won’t know what to make it with next.

There was a recipe in the Martha Stewart’s Baking Handbook for Challah bread, but it called for fresh yeast. Momma doesn’t have fresh yeast and I’m not into conversions and figuring out how much dry active yeast I need in place of it. So, I took the easy way out and looked for a different recipe. That’s the way it goes when you’re tight on time with a plan of doing 365 days of baking. Go figure.

I found this one on the Food Network. I must say, out of all the bread recipes that I’ve tried from them, I find this one the best. It is a Bistro Challah Bread Recipe. For some reason, I’ve had Challah on the brain lately. I have no idea why. I guess it’s just something I’ve always wanted to make. AND, I just figured out that I can score BIG points with my son tomorrow morning when I make him French Toast with it before he goes to school. He’ll be in a MUCH better mood for the 8 hours now.

SAVE THIS CHALLAH BREAD TO YOUR FAVORITE PINTEREST BOARD!

That’s what the momma is here for. I mean, it’s a small part but when I need to figure out what I can do with this Challah Bread, I might as well give someone else some joy in relishing in this bread recipe. I have also been craving Nutella which occasionally happens during random times of the year. I know, strange uh?!

It’s not great for you, but it’s pretty darn delicious, but I decided to forgo it. The boy doesn’t need that much sugar. He douses it in syrup most of the time, too. Ironically, I haven’t had Challah Bread before, so I wanted to try it without any additions. That’s a good idea to see if you like something. I mean it’s a bread recipe so who am I kidding.

Almost every bread that I try is a match made in heaven. Especially bread for dinner. That’s what gets me every time. I eat too much of that darn carb food and it fills me up too fast. What can I say? I’m not the only one who overdoes it.

I haven’t had challah bread before, so I wanted to try it without any additions.
I can’t post the recipe, but here are pictures.

Yeast, sugar and water after 10 minutes. 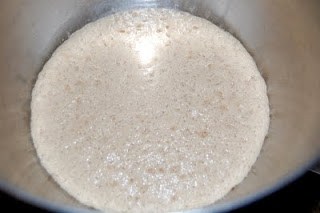 Yeast mixture, eggs and melted butter combined with 2 of the 4 cups of flour. 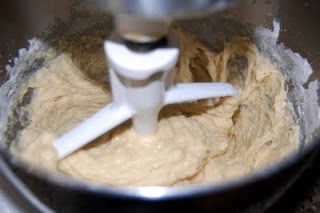 Into the greased bowl for rising. 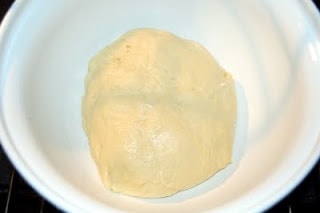 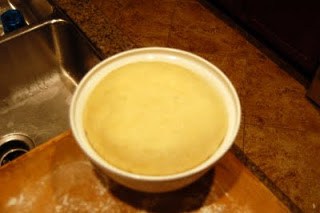 After 2½ hours in a warm oven. Recipe said to let rise for an hour or double in bulk – we went out to dinner. 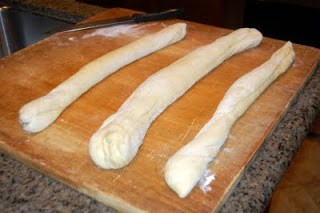 Directions said to put it in a loaf pan, but I wanted to make a pretty braid.
Ok, I couldn’t for the life of me remember how to start a braid. It’s been years since I’ve braided my daughters’ hair and even then I never did it often. You can see on the left where I started and it progressively improved by the end.
In the loaf pan, it was to bake at 375º F for an hour, but I baked it for 45 minutes and that was still too long. Too brown. 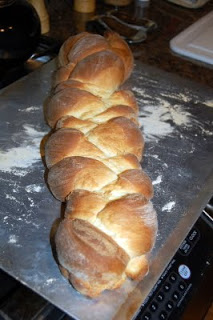 It still tasted good though. I’m excited to try it for French Toast.
Even though I overbaked it, it was still mighty tasty and my husband liked it, too. I am really disappointed that I left it in the oven too long, but I’ll know better for next time. On a scale of 1-4 with 4 being the best, I’m going to rate this Challah bread 3 rolling pins. It had a nice sweet flavor and was soft and spongy on the inside.
Happy baking!
4shares