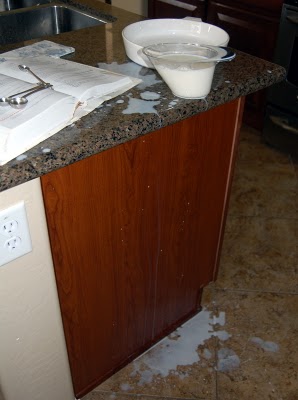 We had rice for dinner last night and I’ve been craving rice pudding lately. NO, I am NOT pregnant. I am looking forward to the time when we have grandchildren. Yikes! I feel so old when I say that, and I DON’T want it to happen anytime soon. Back in Rhode Island whenever I’d go to a Walt’s Roast Beef (they are SO much better than Arby’s, I think!), I’d buy their rice pudding for dessert. Mmm, mmm, good! Now I’m homesick.
I was really looking forward to this, and the recipe couldn’t have been any easier! I was psyched because I’d start it in the morning, it would bake while I cleaned the house, and this would be the one night that I could relax because I would type the blog up in the afternoon before making dinner. But,

“To a Mouse” – Robert Burns
See, last night I finished blogging shortly before midnight then sat up talking to my husband til around 1. We were awakened at 5 am by yet another cat fight under our bedroom window. Our cat, Charlie (my sous chef in pictures), likes to take cover under a plastic chair right next to our bedroom window. He hides here because as tough as he attempts to be, he really is a big fat wuss, and is terrified of everything! He doesn’t even like to leave the security of our back yard and growls whenever I attempt to put him out the front door. He freaks. This black cat (I know because I finally saw him this morning) comes into our yard and kicks Charlie’s butt. He ended up with a scratch on his nose and I had to break it up. So what, do you ask, does this have to do with baking rice pudding today? Well, a lot actually. Being up at 5 and then knowing that my alarm was going off in an hour, I decided it would just be best to stay up and be productive before taking the kids to school. I was able to do some things before dropping them off and then completely crashed, so decided to take a nap. I slept til noon and when I awoke, had no idea what day or time it was. I know it’s happened to you. So, it took me quite some time to get my bearings, and never ended up cleaning the bathrooms, but managed to put the pudding into the oven after this….

Yes, another mishap in the kitchen. I turned from the refrigerator after putting the milk away and put my hand into the measuring cup (I don’t know, I guess with old age depth perception goes, too) which spilled it all over me, the cookbook, counter and floor. I was extremely grateful that I had decided to halve the recipe since I knew I’d probably be the only one eating it. If I hadn’t, instead of spilling only ¼ of a cup, it could’ve been 2.

4 cups milk
½ teaspoon salt
1/3 cup sugar or to taste
½ teaspoon nutmeg (optional) I can’t imagine my rice pudding without it and used freshly grated.
3 tablespoons rice
Yes, only 3 tablespoons. Marion says, “The little bit of rice to a quart of milk is correct. Don’t use instant or converted rice.”

Preheat the oven to 300ºF. Put all the ingredients in a buttered baking dish and stir to blend. If you don’t like your rice pudding too sweet, start with only ¼ cup sugar, then taste. Bake for 3½ hours, stirring three times during the first hour of baking so the rice doesn’t settle.

Notice how she didn’t mention what size baking dish to use – I didn’t omit it. I was still sleepy, so that really threw me off. I think the one I used may have been too big and remember, I halved the recipe – didn’t want to waste any ingredients. While it still had 1½ hours to bake, I ran a few errands and was psyched because upon pulling into the garage, knew I had about ½ hour to spare before removing it.

Yeah. Dried up, crusty, baked rice pudding. I am now sitting here eating vanilla bean ice cream drenched in chocolate syrup. I knew I should have bought some alcohol when I stopped at the store, and I rarely even drink. NOT the rice pudding I was going for. The hole in the middle occurred when I attempted to (Ready? Get this!) stir it after it was already burnt. HAHA! Obviously, something cannot be stirred when dried and crusty. Note to self.
I had to taste it, otherwise, how else am I going to honestly rate it. Um, 1. 1 rolling pin. I rate my recipes on a scale of 1-4 with 4 being the absolute best. I realize this may be a partial rating (actually, come to think of it, aren’t they all?), but this rating is due to baker’s error. I’m sure if the recipe isn’t halved, an appropriately sized baking dish is used, and you are home keeping an eye on the pudding for the last 1½ that it is baking, you will determine that it deserves a different rating. Do not allow my baking experience to deter you. It is a simple recipe. How much simpler can it be? Remember, I have told you in the past that I enjoy making things more difficult than they are for myself. I exhibited that again, today. And it’s now 10:22 pm.
If you enjoy rice pudding, I encourage you to try it. Happy baking!
1shares