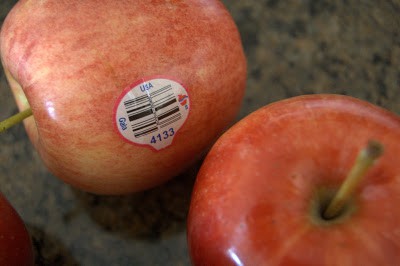 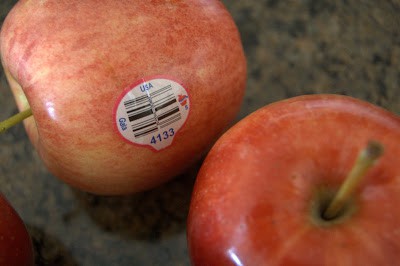 I know, I know, last night I made you Crispy Cheddar Chicken with the cheddar cheese and the those yummy Ritz crackers. And it was truly delicious. You need to make it.
Now.
Believe me when I tell you this.
And don’t forget the sauce because it really added to the dish.
It. was. scrumdidlyumptious!

I just couldn’t get enough of the cheese and the Ritzy goodness that I decided to use them again today.
You can never get enough of a good thing, right?
If any of you are from the New England area, and I know you are (Go Patriots!!), then you’ll be familiar with the fact that New Englanders are known to have a slice of cheddar cheese with their apple pie.
I’m from New England and lived there most of my life.
I’ve never had it.
And to be honest, it really doesn’t sound too appetizing to me, mixing the delicious flavors of an apple pie with a wonderful slice of cheddah (as a Yankee would say, and no, not a Steinbrenner’s Yankee).
I like them both, but I just don’t see how the two would go together.
According to the Food Timeline, this is probably how the practice originated…

Why do some people serve cheddar cheese with apple pie?
The practice of combining cheese, fruit, and nuts dates back to ancient times. These were often served at the end of a meal because they were thought to aid in digestion. From the earliest days through the Renaissance, the partaking of these foods was generally considered a priviledge of the wealthy. This practice was continued by wealthy dinners composed of many courses up until the 19th century. Apples and cheesemaking were introduced to the New World by European settlers. These people also brought with them their recipes and love for certain combinations. This explains the popular tradition of apple pie and cheddar cheese in our country.
“The dark ages…The main meal was taken around the middle of the day…In the evening a light supper was taken and this was always finished with a little hard cheese, for digestion’s sake. Gradually the large mid-day meal was later taken until that meal, wine-drinking and the cheese supper were combined. Thus was born the British habit of finishing an evening meal with cheese; almost every other society has eaten cheese before the sweet course to finish their main wine, or instead of a sweet.”
—Cheese: A Guide to the World of Cheese and Cheesemaking, Bruno Battistotti et al [Facts on File Publications:New York] 1983 (p. 14-5)

There you have it.
Cheese and apples. Apples and cheese.
Ok, it’s not ever going to be as common as peanut butter and jelly, but they are two things that people will continue to put together.

I adapted this recipe from allrecipes.

Preheat oven to 350 degrees F.
Prepare a 1-quart casserole dish by spraying it with cooking spray.
In a small bowl, mix together butter and crushed crackers.
In another small bowl, whisk together sugar and flour. 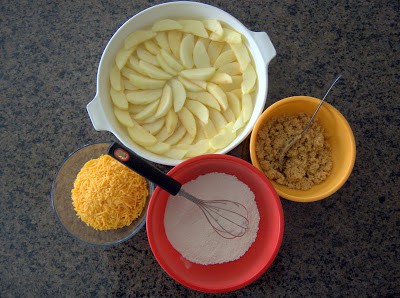 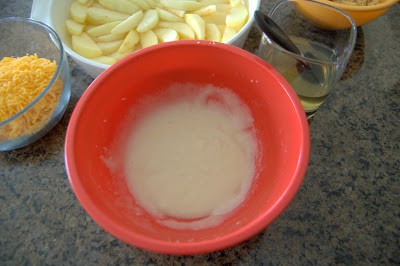 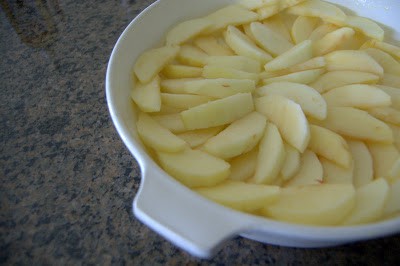 Using a large spoon, drizzle the sugar mixture completely over the apples. 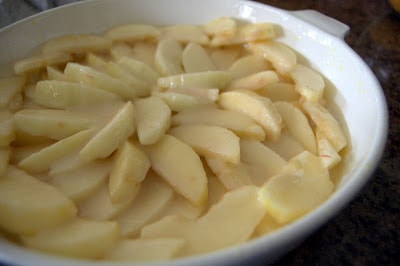 Using your hand, sprinkle the cracker mixture on top.
Bake for 20-30minutes, until lightly browned. 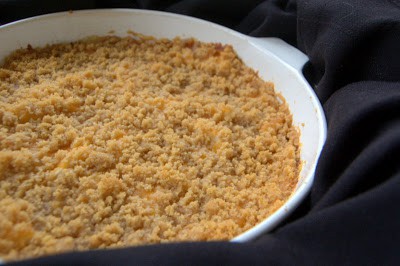 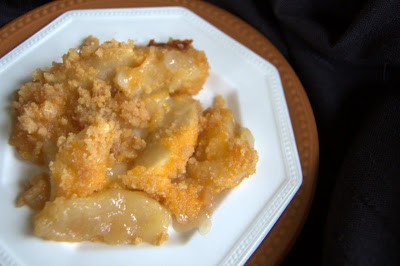 I bake everything I bake on a scale of 1-4 with 4 being the best and this Baked Apple and Cheese Casserole earned 3 rolling pins.
It tasted like CHICKEN!!
No, it didn’t. I’m kidding.
I’m only saying that because we had that last night and it reminded me of dinner.
It tasted like apples and cheese and Ritz cracker crumbs.
At first, I thought it was a little bizarre to have those three things combined, but it works!
I rather liked it.
I think the next thing I need to do is have a slice of cheddah with a piece of apple pie.
Not tonight though.
After I post this, I’m going to bed.
That is, after I spend some more time on PINTEREST! (http://pinterest.com/365daysofbaking/).
Then I will have sweet dreams of cute little puppies and babies, beautiful places I’d like to visit, words to live by and FOOD, GLORIOUS FOOD!!
Enjoy the rest of your evening or day y’all!