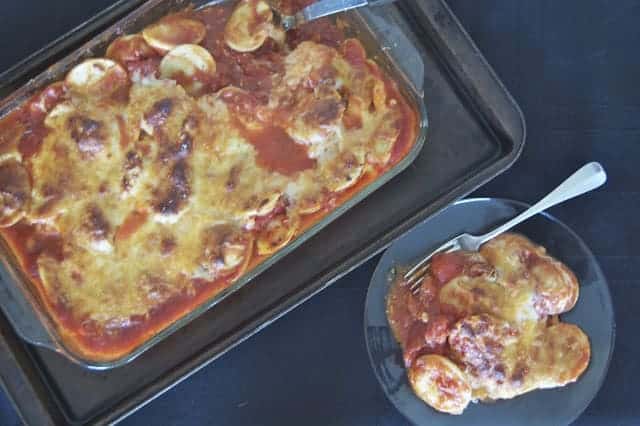 I know it was National Cheesecake Day today and some of you may have been expecting a cheesecake recipe, but…
I had a wonderful day shopping with my daughters, and didn’t have time to make that and dinner.

We went to purchase some necessary goods for dorm life. Our eldest didn’t need much since we’d bought most of it last year, just some storage stuff.
And of course, we each bought some clothes.
Shopping was something my mother and I always did together, too.
We didn’t do it too often because many times she didn’t feel up to it. She had a pinched nerve in her neck from a car accident when I was about 3 years old which caused her lots of pain throughout the rest of her life. Later she became sick with cancer and would undergo various chemo. or radiation treatments.
I remember being very angry when she was sick that we couldn’t do certain things or life had to be put on hold because mom wasn’t feeling well.
Now, looking back I feel very selfish.
But taking it a step even further, I discover that I wasn’t upset about not doing what I wanted to do, but that these ailments my mother so often endured were stealing her from me.
And I hated that.
I hated that plans would be made and they’d have to be cancelled.
That often she’d end up going back to bed because she was in pain or didn’t feel well
and
that there was not a thing I could do to make her better or all go away.
Being a child, I just thought it was all her fault and didn’t understand everything that was going on.
To be honest, I still didn’t or didn’t even want to try to understand as a teenager because all I’d ever really known was mom not feeling well.
And I harbored a lot of resentment because of it.
I see it now for what it was and of course, it’s not something I’m happy about.
I was angry, bitter, and impatient, not completely understanding all that was going on.
I needed someone to shake me to my core, to jolt me back to reality and say,
“Open your eyes!! She’s sick, and above all else, she needs your love and your patience. This isn’t your fault.”
And yet I thought the cancer was.
I was sitting on her lap when I was 5, looking at her big brown eyes and the lines on her face. I pushed her thick black hair back away from her forehead with both of my hands and said, “I wonder what you’d look like without any hair.”
She smiled and said, “I don’t know, but I’d look pretty funny, don’t you think?”
And then she lost it.
Four years later she lost her hair because of the chemo.
For years I blamed myself.
Did I put it out into the universe?
There were other factors involved, I know, but had I started the whole thing?
It’s something I never shared with her because I was too afraid to even bring it up.
So inside my mind it sat and combined with the anger I felt with her being sick, it’s a wonder I wasn’t ever committed.
Forgiveness.
It’s been a HUGE process, but it has truly done wonders.
I’ve let it go because if I hadn’t there’s no moving forward and who knows where I’d be.
And I have a family who needs me. It’s not fair to them if I live in the past and don’t release these feelings and forgive myself.
Or my mother for circumstances beyond her control.
Peace is a wonderful thing. And is so much better for the soul.

You know, this so wasn’t where I was going with this when I told you I had taken my girls shopping.
My thoughts just flew through my fingers and here we are.

My daughters and I were sitting eating lunch and from around the corner and completely out of surprise a woman in her late 50’s came up to our table with a HUGE smile on her face and made eye contact with each one of us.
“I just have to tell you how beautiful each of you are. You’re smiling and you’re having so much fun with each other. I just had to come up and tell you that because now a days people when they see something like this they don’t say anything and it means so much. So I just had to stop and say something.”
I thanked her immensely and felt completely blessed both by what she had said and the relationship I have with my daughters.
What a gift, to have that woman not only identify our relationship, but to verbally acknowledge it.
She was truly an angel.
I wish I’d thought fast enough to ask her name, but she’d left as quickly as she’d shown up.
In time I know my daughters will understand more of the intimacy between us and may not even fully comprehend its’ meaning unless they become a mother themselves or may not ever fully comprehend it.
And that’s ok.
For now, we each are where we’re supposed to be; growing, changing and learning about each other, but more importantly about ourselves.
And that’s what makes the relationship between a mother and her daughter so beautiful – the love, the forgiveness and the bond.

Preheat the oven to 425F.
Heat the oil in a large saucepan over medium heat.
Add the onion and garlic, and season with salt and pepper.
Cook, stirring  occasionally, until softened, about 5 minutes. 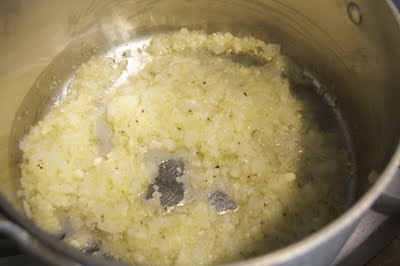 Add the oregano and the tomatoes.
Bring to a boil, reduce heat, and simmer, breaking up the tomatoes with a spoon, until the sauce is thickened and reduced to about 5 1/2 cups, 20 to 25 minutes. 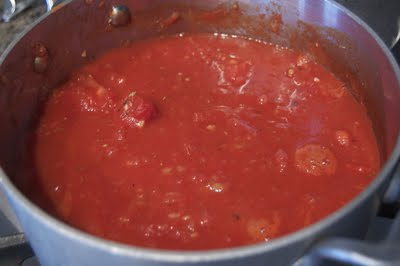 Meanwhile, cook the ravioli in a large pot of boiling salted water just until they float to the top 9the pasta will continue to cook in the oven). Drain the ravioli and return to the pot. 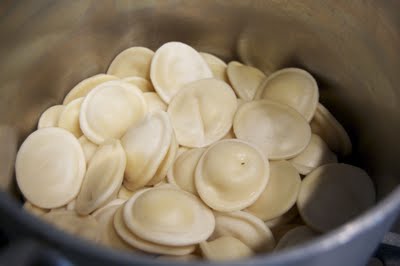 Toss the sauce with the pasta. Pour the mixture into a greased 9 X 13-inch baking dish. 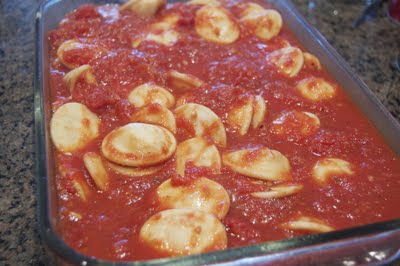 Sprinkle with mozzarella and then with the Parmesan cheese.
Bake for 20 – 25 minutes.
Cool slightly before serving.

Everything I bake is rated on a scale of 1-4 with 4 being the absolute best (I feel like a broken record every day that I say this, but if I don’t new readers may not understand. So to those of you who have been with me a while, thank you for reading this over and over and over again. And thank you for your patience!).
This Baked Ravioli earned 3 rolling pins.
The men in the family really like their pasta and are nuts about ravioli so I decided to make the full amount instead of halving the recipe as I did last night. I know they’ll eat the leftovers tomorrow.
I preferred this to the ravioli I usually make, where I just boil and serve it with sauce. It definitely had more flavor and I thought the made-from-scratch sauce was delicious.
Everyone liked the dish, didn’t rave about it, but the 3 rolling pin rating was unanimous.
Happy baking!