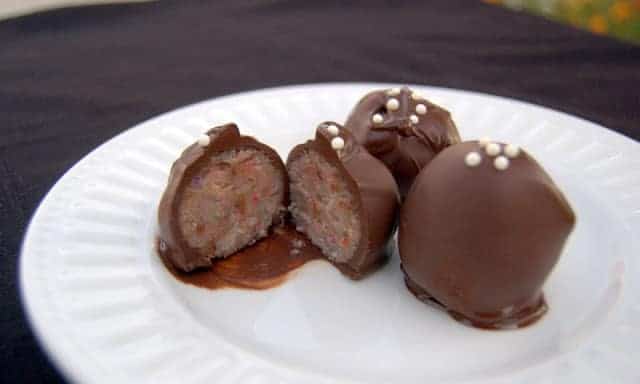 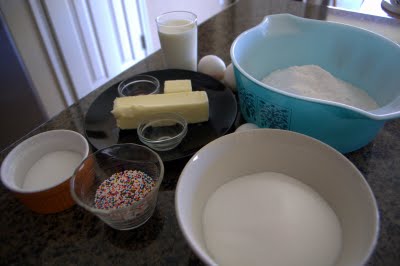 We have a cat.
His name is Charlie and I think he’s three years old. I honestly can’t remember.
We have a love/hate relationship he and I.
When I worked at the vet clinic, I adopted him.
His mother had died when he was just two days old and everyone at the clinic took part in caring for him.
He was absolutely adorable when he was a kitten. He would climb up on our son’s shoulder and fall asleep nuzzled in his neck, and would cuddle up with the dog to take naps on the floor.
Brady, our Golden, was so gentle with him and loved the company.
Then Charlie became not so adorable.
He would hide under dressers and attack our feet, biting at our heels and toes as we would walk by.
He became very moody when we would pet him, only wanting to be touched in certain places and would bite down on your hand completely unexpected, without any warning.
It sucked.
He’s gotten better though, and has become more patient, affectionate even.
I was sitting on the couch this morning and Mr. 365 was on the other end, each using our computers.
Charlie had come in from being outside and wanted some attention. He walked along behind me on the couch begging for me to pet him and scratch his neck and head as I have been doing lately.
I obliged. My petting/scratching him and his roaming the back of the couch went on for a good 10 minutes, and he was purring up a storm.
“Oh, Charlie! You’re such a good boy and you’re showing so much love. Yes you are.” I said as I moved my fingers toward the back of his head.

And then the floodgates opened.
That little son of a freaking cat had bitten me and had bitten me hard on the heel of the hand.
Without any warning, Mr. Hyde had become Dr. Jekyll.
I HATE that!
There was no puncture wound, but it HURT!
Ok, and probably more shocked me than anything else.
And I cried. Bawled like a baby, me did.
Mr. 365 laughed.
Not because I was crying, but because of the way I was crying and he often did this when I was pregnant. The best way I can describe it is if you’ve ever seen the theater comedy and tragedy masks, then you know what I’m talking about.
He says it’s me – happy one minute and at the drop of a hat, crying the next.
I have no problem with his teasing because it’s true, so very, very true.
I’ve been challenged mentally and emotionally these past few weeks, not to mention some hormones have been thrown in there and the cat’s attack was the impetus for a release.
Life, really missing my mom because Sunday was her birthday, and some other things that have been going on had just sent me over the edge.
Mr. 365 came up to me a few minutes later and gave me a great big bear hug, saying, “you’re perfect for me! You make me laugh and it’s always been that way, and I’m perfect for you, too. I love the way you are!” A slight smile broke through the tears.

He’s always there when I need him.
I love that man.
I’m still mad at that cat.

1 1/2 cups Caramel Macchiato Coffee Creamer + more if necessary
16 oz. semi-sweet chocolate (This amount was enough to cover about 25 balls. I ran out of chocolate, so I suggest you use 32 oz. to cover all of them.)
toothpicks, plenty of toothpicks

Preheat the oven to 375F.
Sift flour with baking powder, and salt and set aside.
Cream butter until light. 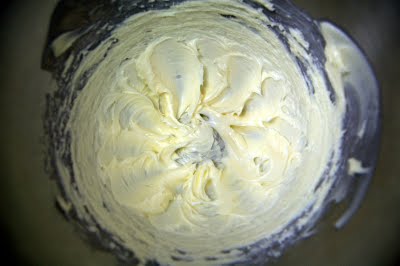 Gradually add 1 1/4 cups of sugar, continuing to cream until fluffy. 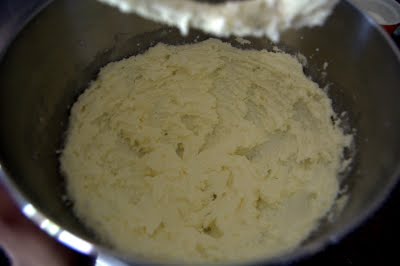 Add vanilla and almond extracts and at low speed, mix in dry ingredients alternately with the milk, beginning and ending with the dry and adding about one third of the total at a time.
In a separate bowl, beat egg whites until frothy, slowly add remaining sugar, and beat to very soft peaks.
Fold into batter a few short strokes of being well blended. 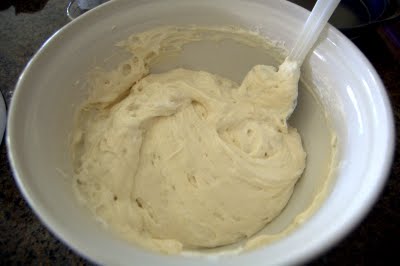 Gently fold in nonpareils (colored sprinkles), using as few strokes as possible. (I used too many, and the colors started to run.)
Spoon into 2 greased and floured 9-inch layer cake pans. 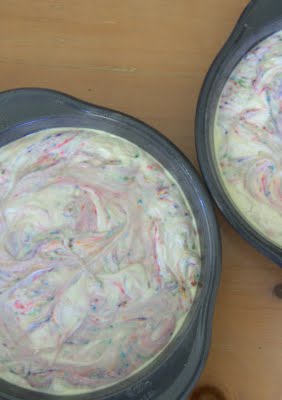 Bake for 20-25 minutes until cakes shrink slightly from sides of pans and are springy to the touch.
Cool upright in pans on wire racks 5 minutes, then invert onto racks, turn right-side-up, and allow to cool completely.
Using your fingers, crumble both cakes into a large bowl. 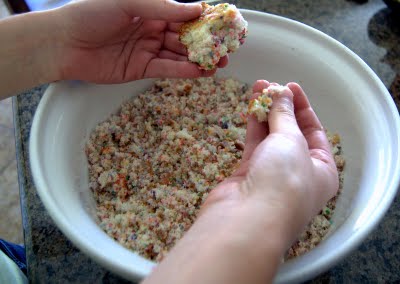 Prepare a rimmed baking sheet with parchment paper.
Add 1 1/2 cups of the coffee creamer.
Allow mixture to sit for a few minutes.
Using your hands, work dough and creamer together so that you can form it into a ball. You may need to add more creamer, but do so by tablespoons and add just enough so that the dough sticks together. You do not want soupy dough.
With a tablespoon measure dough, and shape into a ball.
Place balls on prepared rimmed baking sheet and place in the freezer to chill for 90 minutes.

Prepare another rimmed baking sheet or cookie sheet with parchment paper.
In a small saucepan over low heat, melt chocolate.

Place on rimmed baking sheet and allow time to harden.
Store them in a sealed container in the freezer and remove just before serving. 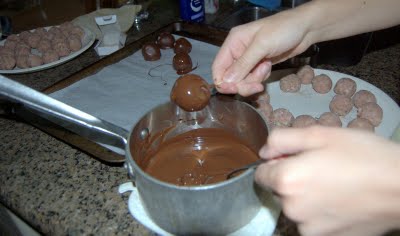 Ok, dessert day number four in a row I have to say was pretty exciting only because it was my first experience with cake balls.
I am pretty hooked even though they are a bit time consuming (and I didn’t take the time to really decorate them as some people do!)  Check out Angie’s site, Bakerella. Her items are gorgeous!!!
One day I’ll get there, just need some more practice and have to figure out how to put a thinner layer of frosting on the ball.
It was too thick and overpowered the cake.
The cake had a nice sweetness to it with the creamer. I liked the flavor as did other people (some neighbors and family) who tried it.
I’ve seen recipes where they use canned cake frosting to bind the crumbled dough, but I’m making things from scratch here and didn’t want to go in that direction. They also use boxed cake mixes.
“Not that there’s anything wrong with that.”
It’s just that I’ve been baking things from scratch since I’ve started this and I’m going to keep it that way at least until 365 days is over, then we’ll talk.
it just doesn’t feel right to me to not make things from scratch.
I thought about making a buttercream frosting, but having never made these, I just decided to use what they suggested in this tutorial.
I think I should have left out the sprinkles and just used the plain white cake with the creamer. The sprinkles gave it a little crunch, some color and a little extra flavor, but as you can see, they resembled meatballs when they were on the baking sheet. That didn’t excite me. The batter became a very unappealing color. I should have used the sprinkles for the top instead of in the cake ball.
I also needed more melted chocolate, and need to determine how best to roll them to ensure a more uniform and lighter covering.
Too much chocolate made them way too sweet.
I am excited about trying more flavors and doing more decorating. These are really cute things to do.
I rate everything I bake on a scale of 1-4 with 4 being the best and these Chocolate Caramel Macchiato Cake Balls earned 2 1/2 rolling pins.
They need some work, but were adequate for the first go-round.
But the thing that made them really awesome was the time I was able to spend with my 17 year old daughter when she spontaneously jumped in to help me frost them. It was wonderful, unexpected  quality time and I thoroughly enjoyed it! Thank you, my dear.
Happy baking!
6shares