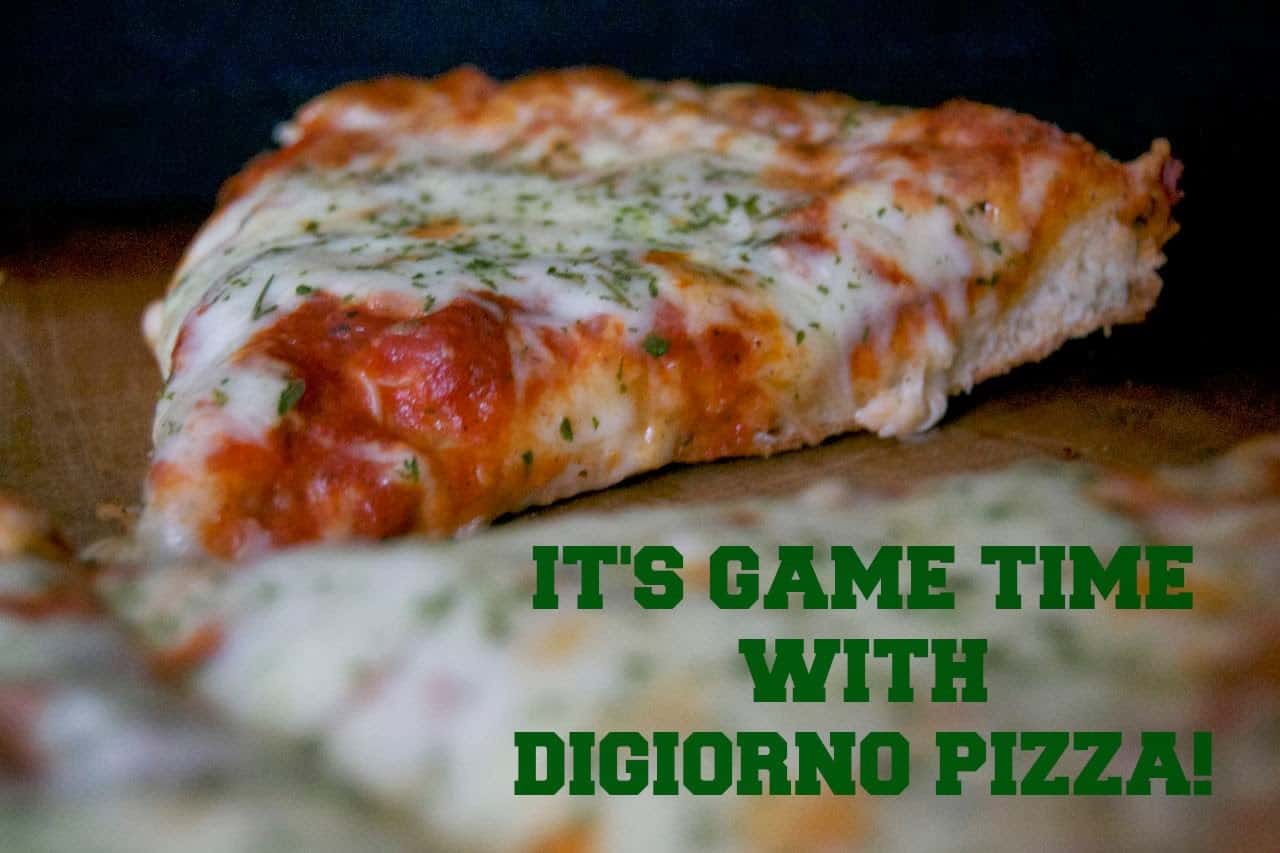 0shares
This DiGiorno pizza post highlighting the rollback price at Walmart for #gametime is hosted by the Collective Bias® Social Fabric® Community. This shop has been compensated as part of a social shopper amplification for Collective Bias and its advertiser. All opinions expressed are my own. 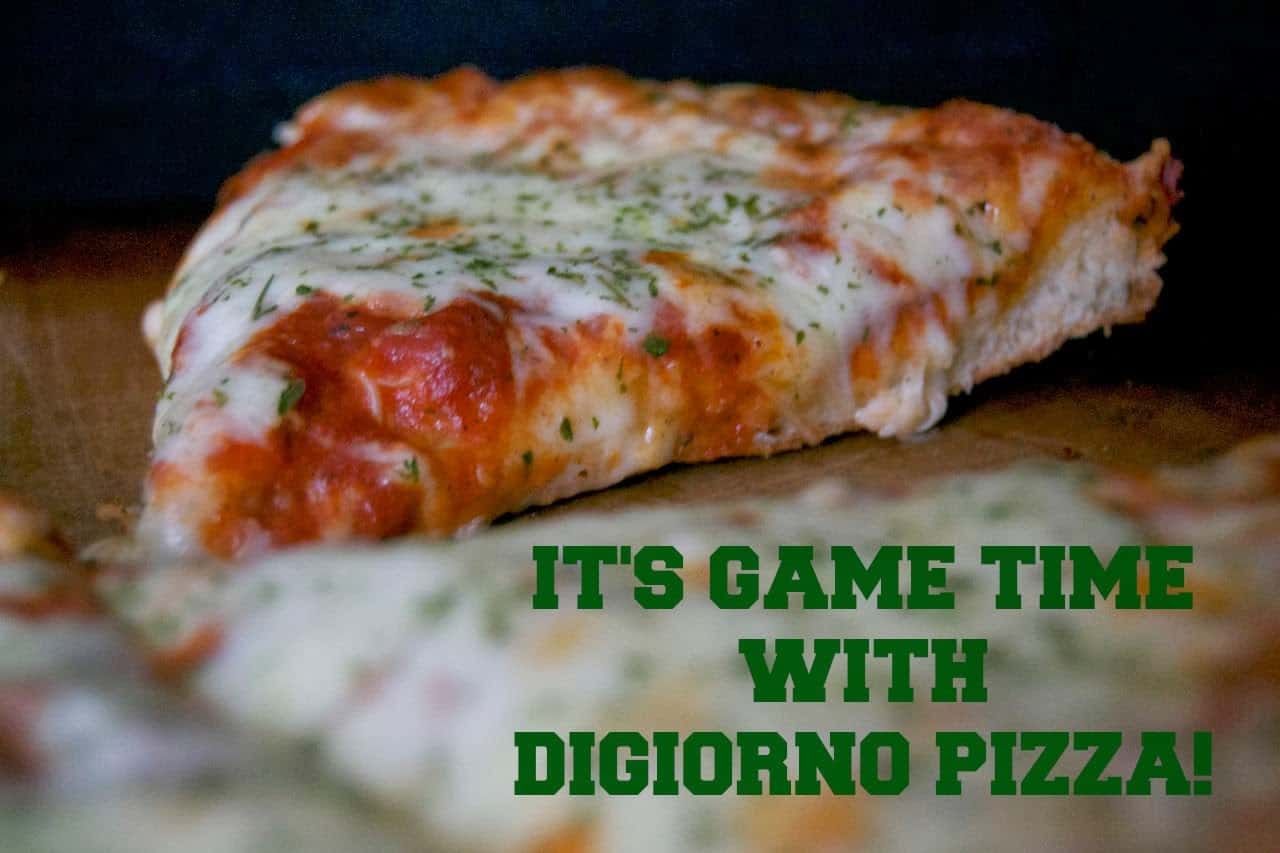 Plain and simple, the 365 family LOVES their pizza! We used to have this habit of going out as a family every Saturday night to attempt to find the best slice around. Here in northern New Hampshire our choices are limited. VERY limited, though we have found a few and one that particularly stands out. When we aren’t in the mood to go out OR more importantly, when a BIG FOOTBALL game is going to be on TV we have to watch it because our most favoritest team is playing, and it’s for some sort of championship AND if they win it would mean they go on to the next even BIGGER game, I head to our local Walmart to buy DiGiorno Rising Crust pizza #GameTimeGoodies!! I am SO not wanting to miss a minute of this game or take the time to make my own.
It’s SO exciting and I love football!!!

It really stings at first, but I know that long term this one game and this loss is really going to have little impact on my life, so a few hours of pain and the next day I’m over it. I have to say that as native New Englanders, we’ve been spoiled with our share of pennants, championships and titles with all of our teams since 2000, so I can’t really complain that the guys lost. I still want that quarterback to get one big one under his belt before he calls it quits and our family loves our team so much that we named our dog after number him nine years ago.

So, our team didn’t win, but at least we were happy eaters!!
Did you know that Walmart has a special Rollback price on DiGiorno pizza?
It’s $4.50!!! Yesiree, Bob ~ a whole $3.00 cheaper for each pizza at Walmart than at my local grocery store!!! It was easy to find, too, in a case at the end of the aisle!
So, go and stock up for the even BIGGER game in a few weeks! 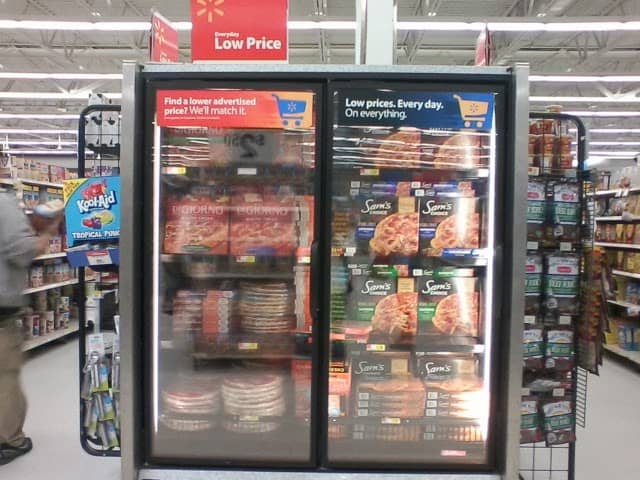 We have some mega cheese pizza lovers in the family – those kids of ours.
They might  eat some pepperoni on a pizza if they have to, but there’s no eating a Supreme!
Oh well, all the more for me and the Mr! 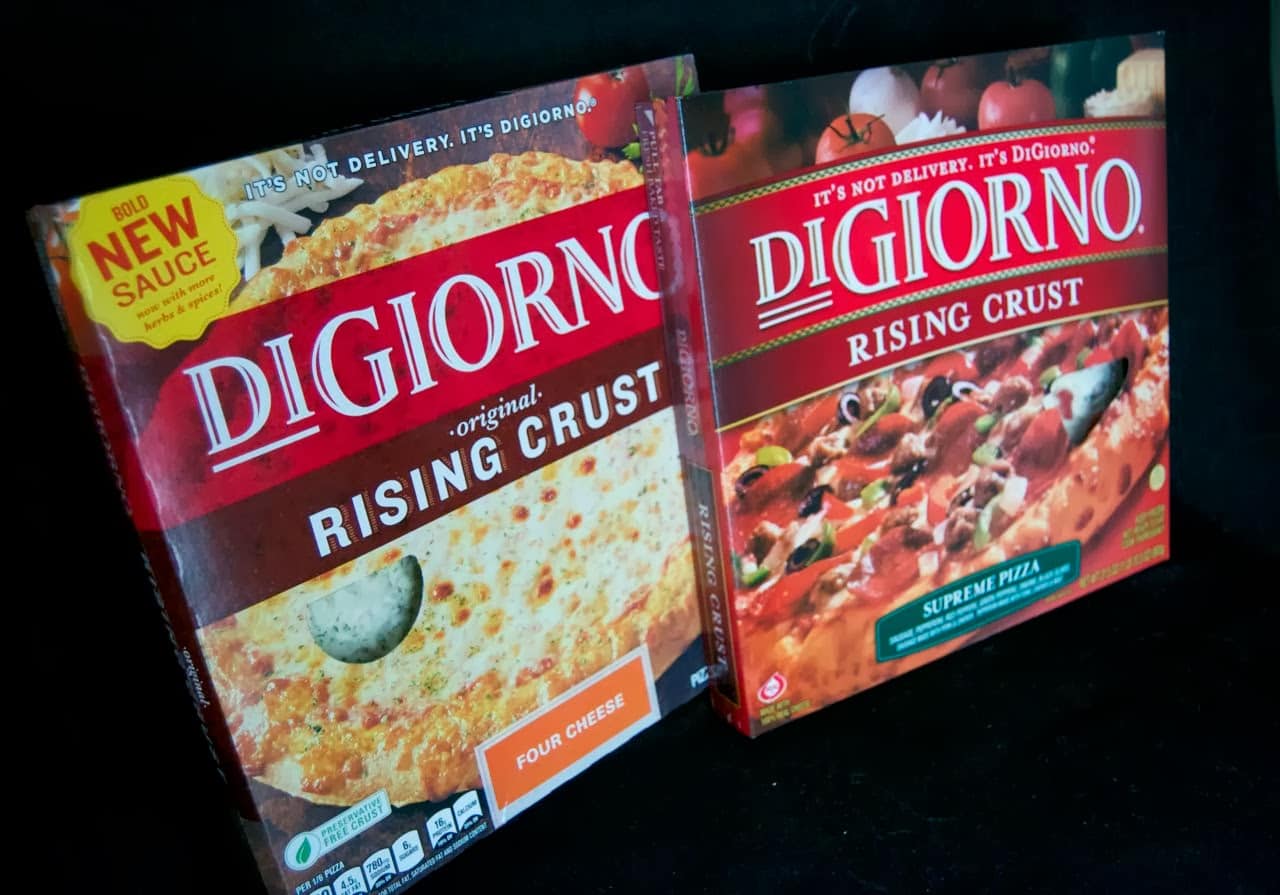 I loved the easy open package.
I am SO over trying to wrestle with those pizzas shrink-wrapped airtight like mummies in plastic and then when you finally do get them open, the cheese shoots all over the counter and onto the floor. It makes the dogs happy, but I am getting too old to pizza wrestle. 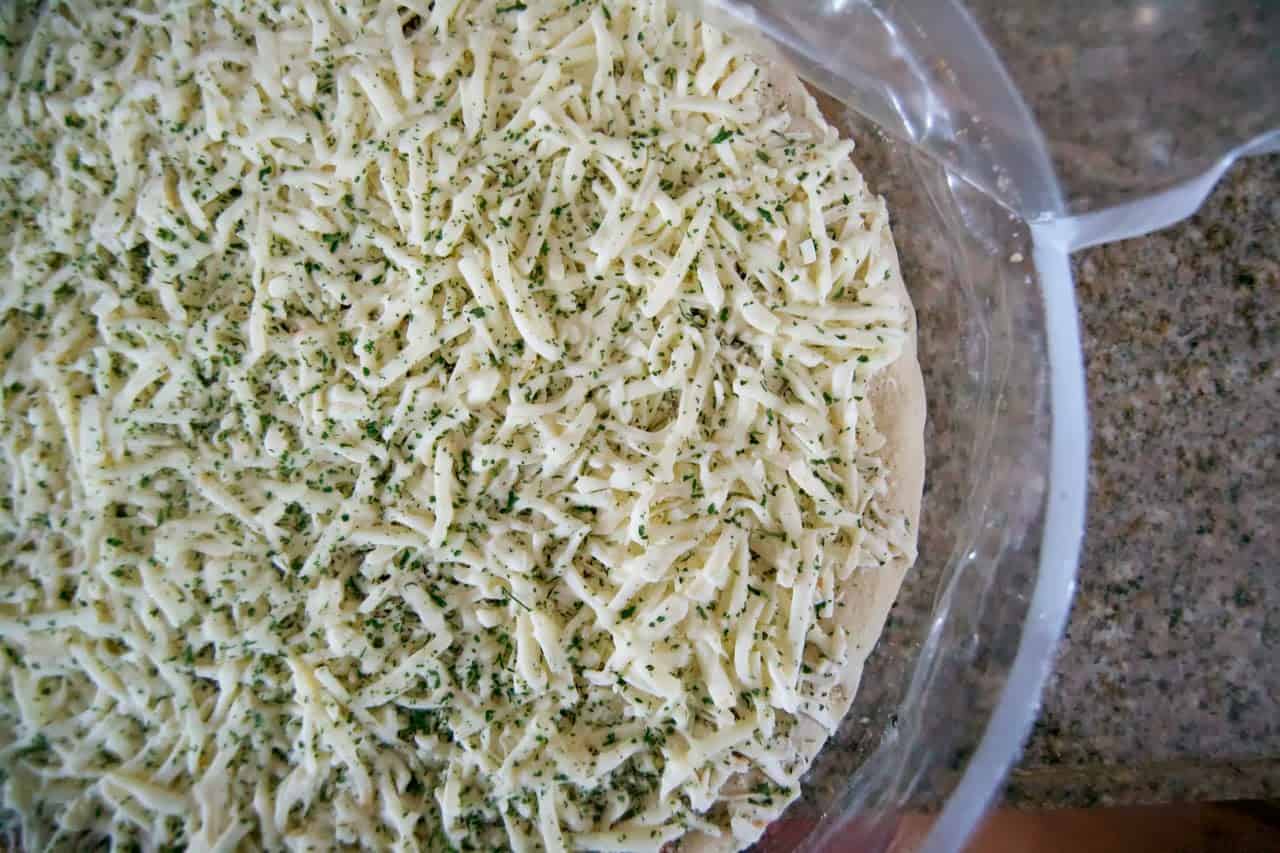 Into the oven she goes (or maybe this one’s a he). I chose to bake this one right on the rack because the kids like a crisper crust. 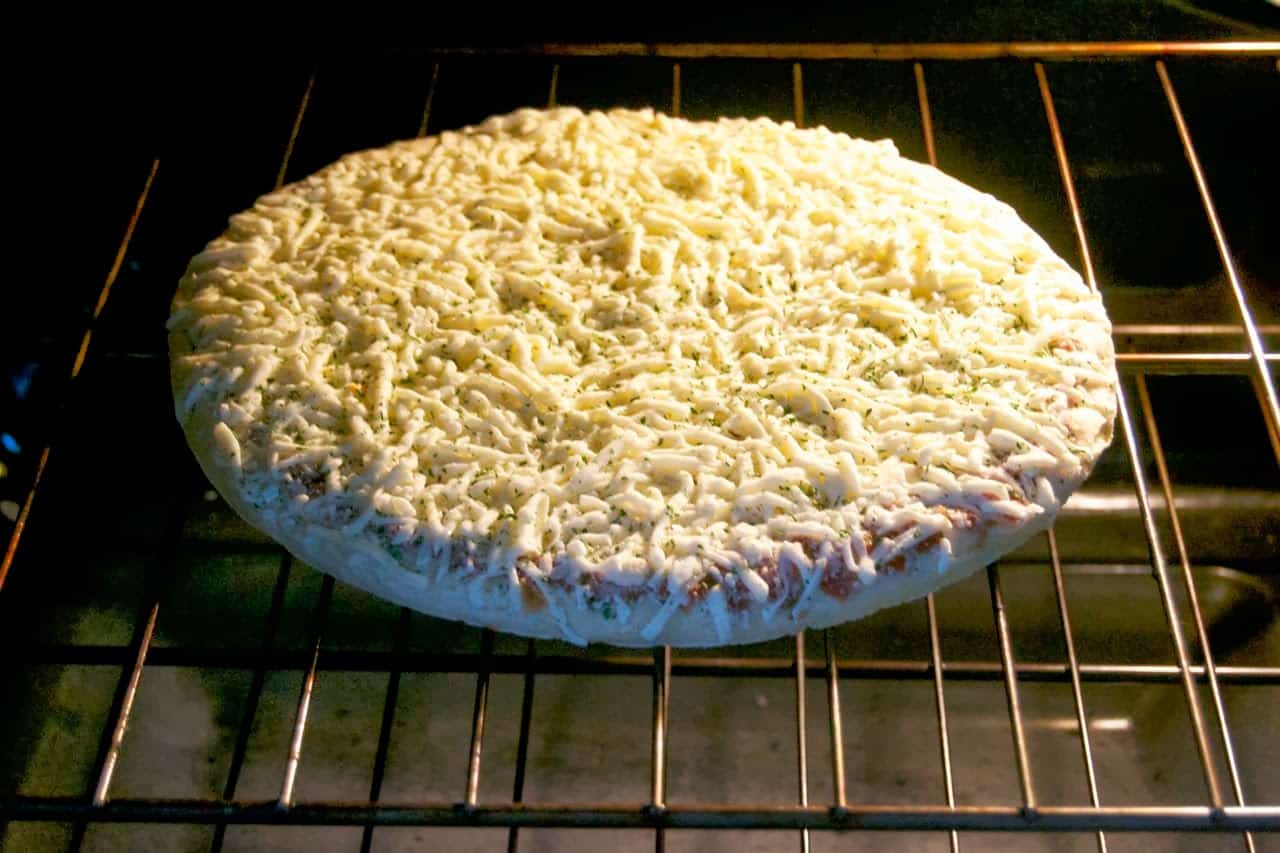 It baked up so nicely and the cheese melted so evenly. I could barely get the words out of my mouth that it was on the table before the vultures descended.
Geez, it’s like I never feed them! 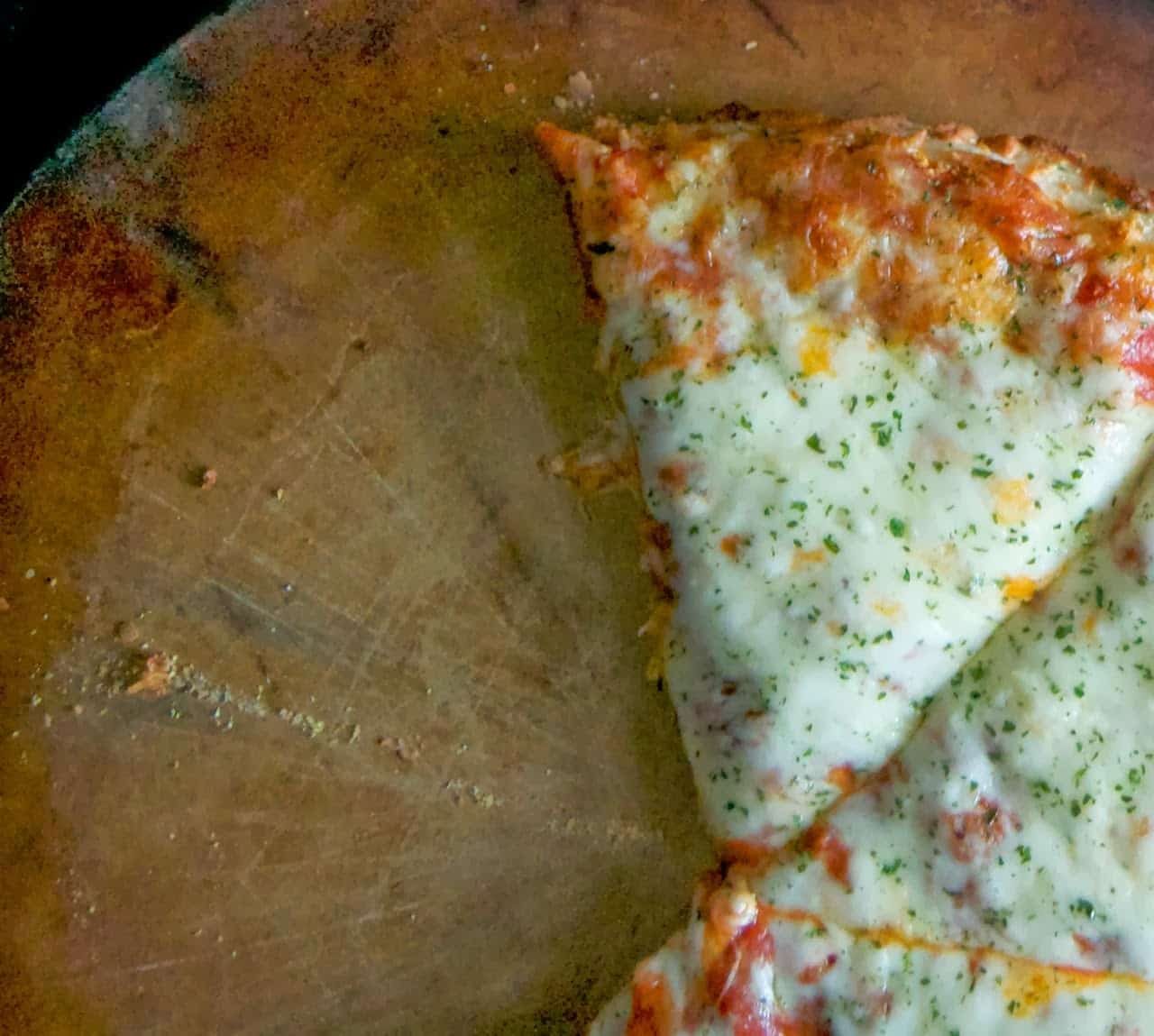 I have to admit that it’s hard for me to resist pepperoni when it’s sitting there on a pizza ready to go into the oven. Yes, I snagged a few. I’m not gonna lie.
READY to eat!!! 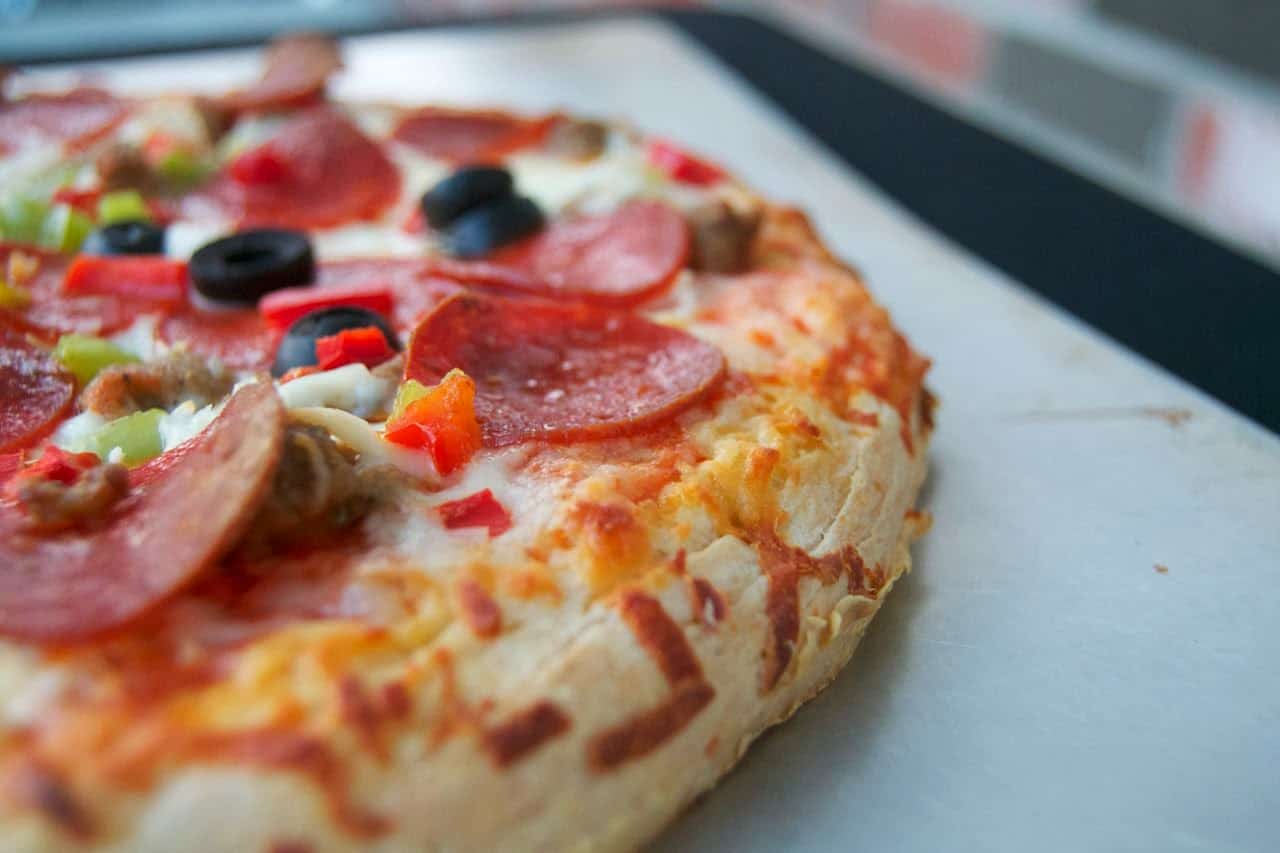 And we were hungry!! Nothing better than drowning your halftime sorrows in some pizza. Not that I’d lost hope in our team at that point, but it certainly wasn’t looking like the last time we played them coming from 24-0 deficit to beat them. 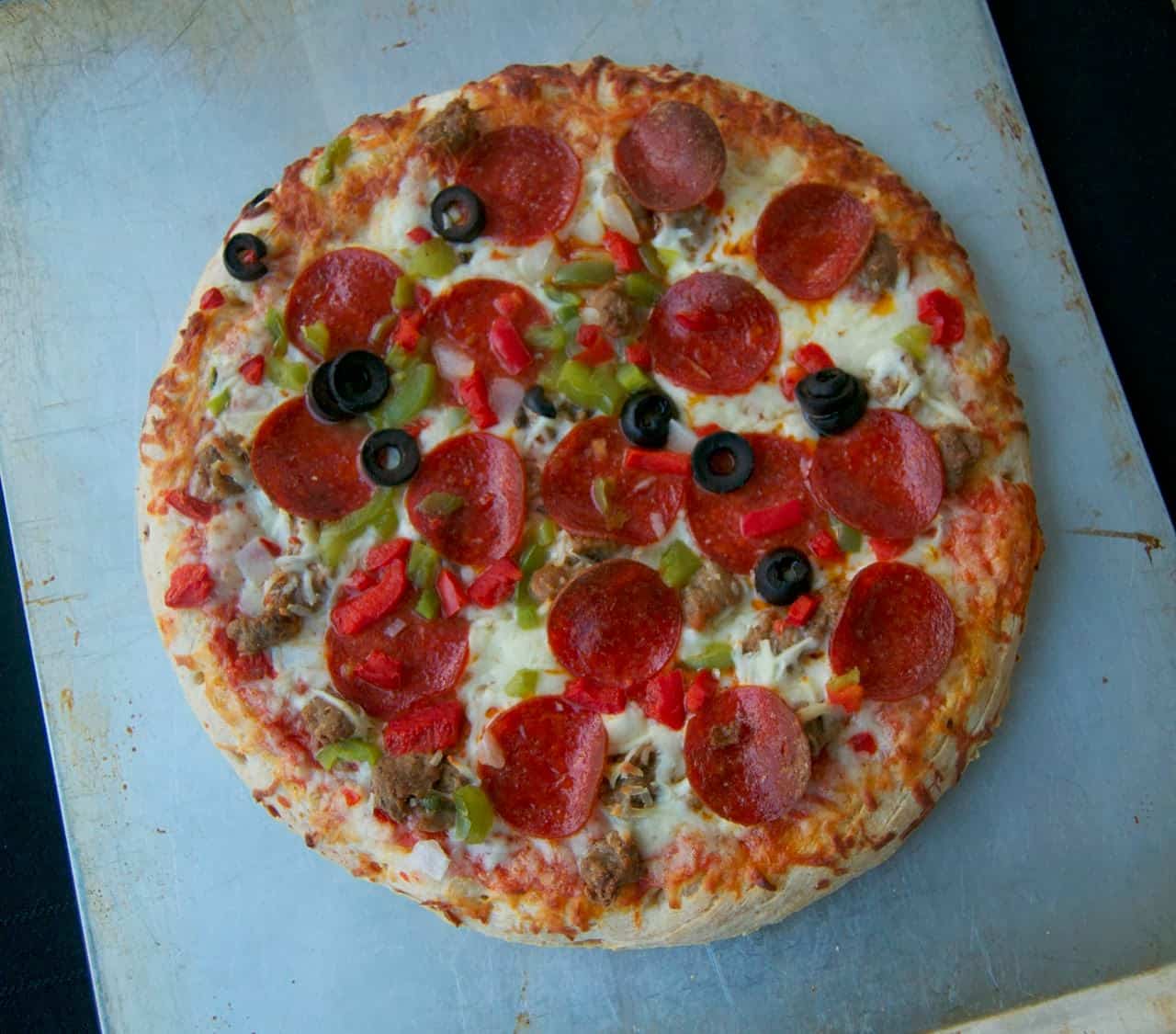 Oh well, as they say…

THERE’S ALWAYS NEXT YEAR!!!
I give you BIG baking hugs and muffins!!
0shares