↑
Home » How to Unclog a Sink Drain – NATURALLY! 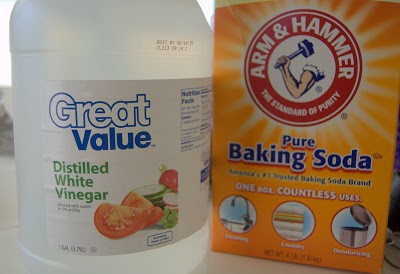 Now I KNOW this post has nothing to do with cooking,
BUT…
It has everything to do with the hygiene in your bathroom.
Ok, well maybe not everything, but quite a bit.
‘Cause if your bathroom sink isn’t draining well, it’s just going to harbor germs and bacteria and everyone knows that’s not a good thing, especially this time of year when it’s flu season.

Since we moved into this house, I’ve had a problem with both of our master bath sinks draining slowly.
VERY. SLOWLY.
So slowly in fact, that I called a plumber.
It remedied the situation in my sink for a little while, but only took another few months for it to become clogged again.
Yes, it’s probably my shoulder length hair that has a lot to do with it, but still.
I think the last people to live in the house clogged it up pretty darn well before we even moved in.

I wasn’t interested in removing the u-pipe under the sink because that’s just complete grossness and I’m not going there. I have absolutely NO desire to see the crud in that pipe.
I shudder just to think about it!
That gross black gook –  ICK!

I was disgusted enough just to remove the sink plug so that I could get a clear shot for pouring the necessary ingredients into the drain. My skin was crawling  and I was gagging just from that.
Yeah, I’m a wuss.

So, instead of spending your well-earned money on those chemical sink unclogger thingies that smell bad and as I’ve found, don’t always work, use three things that you probably already have in your home – baking soda, white distilled vinegar and plain ol’ tap water.

I have to say, it worked like a charm.
I can’t wait to brush my teeth tonight and watch all of the water go DOWN the drain instead of seeing it accumulate in the basin.

AND the absolute BEST part of this whole thing (besides the working sink, of course) is that you’re doing a good thing by the environmento!
You’ll get good karma for that. 😉

I found this at Heavenly Homemakers.

Don’t judge my filthy sink.
I thought it might be pointless to try and clean it before I started taking pictures.
You need to see real life and my real life is a very dirty sink and stains from me just coloring my hair.
It’s life and I’m not going to fake it.

How to Unclog a Sink Drain – Naturally

Place a bowl or container large enough to catch any drips under the u-pipe of the sink. You’ll want to do this, trust me. There won’t be a lot of water, but it will be enough for anything you don’t remove to get wet and yucky-like.
Unscrew the bolt behind the pipe to release the sink stopper, if necessary and remove the stopper from the drain. Clean that while you’re at it, too. 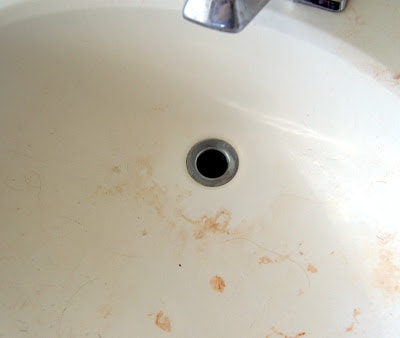 Place a rag into the sink hole to prevent the bubbles from coming up and spilling out into the sink. This will make sure that the enzymatic reaction takes place in the drain where it’s supposed to.
Using a damp cloth, wipe around the drain to clean the area around the hole.
Pour the 1/2 cup baking soda into the drain. 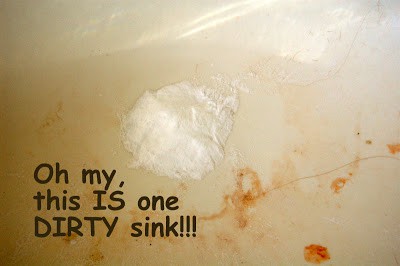 Slowly pour the 1 cup of vinegar into the sink. 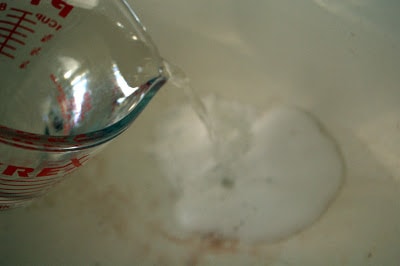 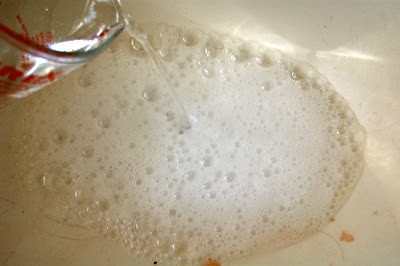 Allow the magic to happen for at least one half hour. 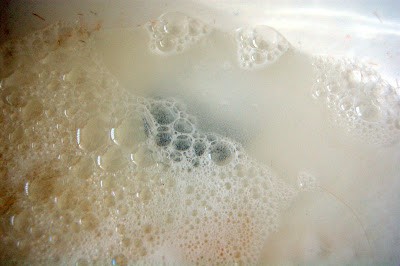 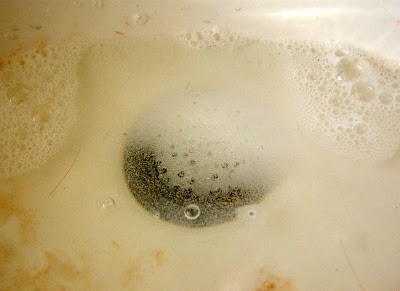 While you’re waiting, fill a large pot with water and bring to a boil.
At the end of 30 minutes, slowly pour the boiling water into the sink and listen to the wonderful sound of the water running all the way down the UNCLOGGED drain!!! 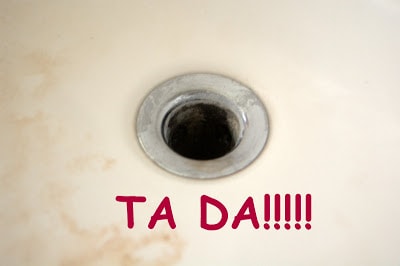 Gotta love Mother Nature and her natural ingredients!
Chemicals, shmemicals!
Anytime I can use natural ingredients in cleaning my home, I feel better about it.
There’s enough garbage polluting our bodies, I don’t need to add to it if I don’t have to.
I’m interested to see how long this will hold up.
I suppose if it doesn’t work for you the first time, then you could do a second application.
That would be one really clogged sink and I can’t say that I envy you.
I’m off to go clean my bathroom now…
I give you BIG baking hugs and muffins (and sparkly clean sinks with running water)!!!
264shares