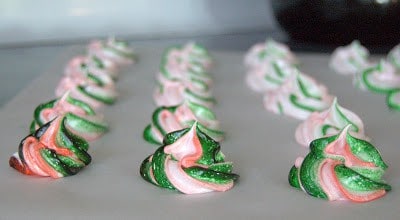 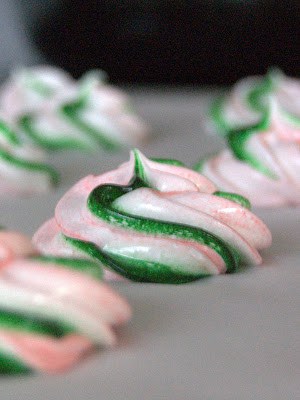 I’m going to tell you this now and I’d like to say that I’ll only tell you this once, but these were the yuckiest meringues I’ve made yet.
The only other time I’ve made them was for Halloween last year. They were the Ghost Meringues and they were really cute with the mini chocolate chips I used for eyes and even tasted good with the vanilla extract.
These festive holiday ones, not so much.
Yeah, no.
Not making them again.
Evah.
Even if I were to change the recipe a tad.
So, know what? I leave it up to you if you want to take them on.
I take no responsibility for the outcome – you’ve been warned. There’s my disclaimer. hee hee

I’ve seen them throughout the internet and thought they looked so pretty with the red and green that I just had to give them a go.
It should have been a sign that they weren’t going to turn out too well when I had to mix the egg whites for like, 3 hours before they became stiff.
Ok, maybe not that long, but far longer (that doesn’t sound right, but anyway) than needed.
Those things were just NOT cooperating and wanting to stiffen.
Stupid egg whites.
I think it may have been that there was a bit of yolk that leaked into them and try as I could to extract it all from the three egg whites, it just wasn’t happening.
Those are my thoughts anyway. 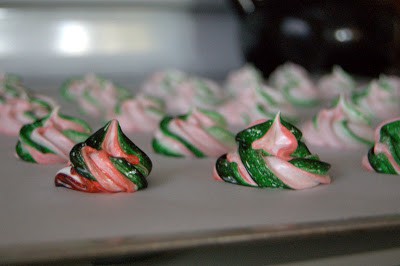 I need to let you know that I’ve gone back to work full-time, so I’ll be doing my best to find a balance between family, work, the blog and my 365 Facebook page.
I appreciate your continued support and patience during this time.

3 large egg whites, room temperature
1/8 teaspoon kosher salt
1/4 teaspoon cream of tartar
3/4 cup superfine sugar
*I couldn’t find superfine sugar in the store I went to, so I used a little bit more than 3/4 cup granulated sugar that I had placed in my food processor and ground for about 3 minutes until it was fine and then allowed it to settle for 30 seconds before using .*
1 teaspoon peppermint extract *TOO much!!! I really suggest using 1/2 teaspoon – it was just way too strong for my liking.
red and green gel food coloring – the liquid stuff just doesn’t work and really makes them look kinda gross. Trust me.

Preheat oven to 250 degrees F.
Prepare a large baking sheet by lining it with parchment paper.
In the bowl of a stand mixer, fitted with the whisk attachment, combine the egg whites and salt and beat until frothy. 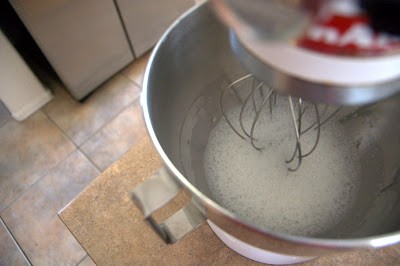 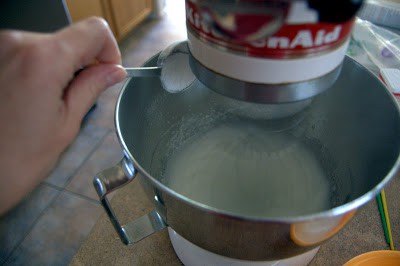 Beat in sugar, one tablespoon at a time while continuing to mix. 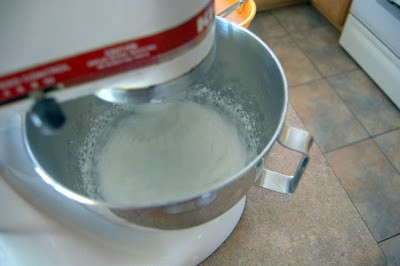 Add extract and continue beating until meringue becomes thick, glossy and can hold stiff peaks, should be about 6 minutes or so.
To color the meringues, use a small paintbrush to paint 4 strips of food coloring, 2 of each color, up along the inside of the pastry bag. 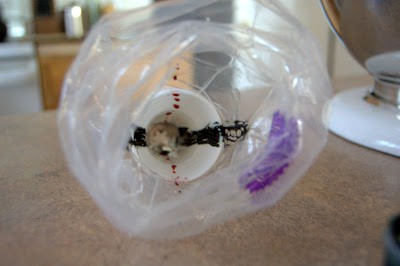 Place the meringue into the pastry bag. 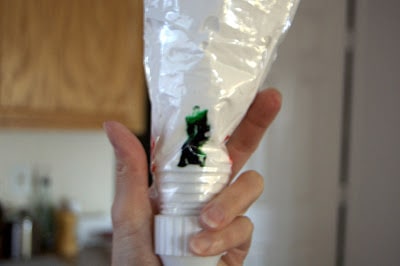 Squeeze onto prepared baking sheet, leaving about 2 inches in between each.

Bake 1 hour. Turn off oven and allow meringues to remain in oven for another 2 hours until dry.

I didn’t even take pictures of the finished product, I was so disgusted with them.
The pictures you see are before they were baked.
Don’t worry, they didn’t look much different.

I rate everything I make on a scale of 1-4 with 4 being something you absolutely positively need to make and these certainly did not reach a 4.
I think they deserve a 1 1/2.
BLECH!!!
Well, I won’t be making these again!
Yeah, huge disappointment.
So, as I said before I’ll leave it up to you as to whether or not you want to make a go if it.
I wish you luck and hope they turn out for you.