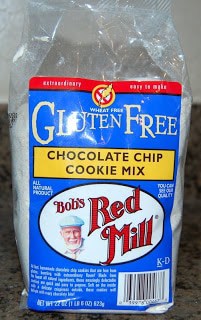 I confess. Today’s chocolate chip cookies are not made from scratch. (Gasp!)  I know, I know. And I’m feeling pretty guilty about it. On a typical day I wouldn’t have done this, but today with time constraints and a major new diet undertaking in the family, using the mix was warranted.
I drove our eldest back to college today after her spring break and was caught in traffic both ways because of accidents. Of course, it is a highway and a very well traveled road by people living in and out of state, but it was unusual today because since her first being up there in August, this is the first time that I’ve had that happen, and I’ve made numerous trips.
The biggie though is the undertaking of a gluten-free diet for our other daughter. Since school has begun her acne has increased. We’ve tried various skin care lines for 30-60 days at a time, and have put her on medications to see if that would help. All to no avail. And we are definitely not going to put her on a birth control pill. So, I keep being pulled to information on gluten and the link it has to acne. It’s as if somebody’s trying to tell me something. Well, it certainly couldn’t hurt, and I’m sure her eating more natural, raw, and healthy foods could only have benefits all the way around. My main concern is cross-contamination since not everyone will be going gluten-free, and as I told a good friend about it today, I can feel myself becoming a little OCD (obsessive compulsive) with this. Fortunately, my good friend, Kristen, has been doing this for years for her whole family, before there were cookbooks and so much information about it in fact, so I’m excited that she’s so willing to hold my hand through this. And I also have another friend who has just one of her children eating this way, so I’ll have that perspective as well.
I’m excited and nervous at the same time. I’m ready to do this and it’s all about our daughter. If it helps, I’ll be dancing all over the place. She is definitely going to have to make some adjustments in the way she eats. But after looking over some lists as to what she can and cannot have, she wasn’t too disappointed because Breyer’s Coffee Ice Cream  is something she will still be able to eat. Life would be over if she couldn’t eat that ice cream. So, it’s all good.
While I won’t be completely changing this blog to include all gluten-free baked goods, I will include some things. I can’t deny the masses, especially a growing teenage boy. I had trouble tonight telling him he couldn’t eat the 6 cookies he wanted to and that they were made especially for his sister. He was in the midst of pouring his tall glass of milk. I found numerous websites and blogs, so I’ll be sure to hunt down some really good recipes. 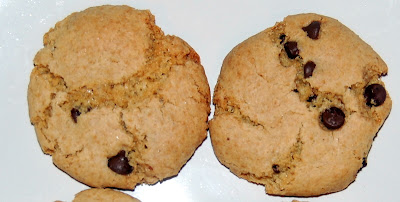 To be honest, these really turned out to be much better than I thought they would. Granted they weren’t really sweet, but to me they tasted similar to the peanut butter cookies I made, but with chocolate chips in them. They didn’t taste peanut buttery, they had that texture. My daughter wasn’t too nuts about them, but did give them a rolling pin rating of 2½. My rating system is on a scale of 1-4 with a 4 being the best. She knows this is going to take some getting used to, but she is definitely willing to make the effort.
Tomorrow, a real recipe from scratch. I promise. Happy baking!