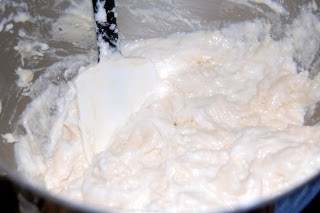 1shares
We aren’t Irish here, but since my daughter was going to a party at a friend’s house and needed to bring some food with green to share, I figured I’d make some cupcakes. I had high expectations – thought they would look picture perfect when they were sliced in half, that they would taste unlike anything anyone has ever eaten, that the frosting would be delicious and fluffy, and that it would sit atop the cupcake with a perfect swirl. My husband is always telling me to go into everything with no expectations, especially when it comes to our childrens’ athletic activities. That way I’m not emotionally attached to the outcome, say of a baseball game should there be a loss, and there are no disappointments. I suppose expectations could apply to cupcakes, too. But I’ve watched ‘Cupcake Wars’ and that other show, ‘DC Cupcakes’ (I think), and they almost always have perfectly tasting and looking cupcakes. Ok, I know they do this for a living and they are masters in their craft, but why can’t I know exactly how to do everything right the first time I try it? It’s not too much to ask, is it?

I adapted recipes from two cookbooks for this; one for the cupcake itself and one for the frosting. The cupcake recipe came out of The New Doubleday Cookbook, p. 802; authors, Jean Anderson and Elaine Hanna; publisher, Doubleday, a division of Random House, Inc.; ISBN 0-385-19577-X. The frosting recipe was from The Fannie Farmer Cookbook, Thirteenth Edition, p. 602; author, Marion Cunningham; publisher, Alfred A. Knopf, Inc., a division of Random house, Inc.; ISBN 0-394-56788-9. 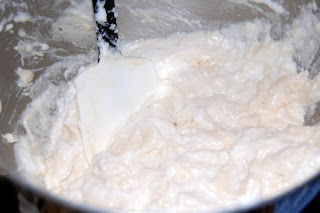 Spoon one third of the batter into another bowl. Add 5 drops of food coloring. Mix until well combined. If a darker green is desired, add more food coloring by drops of two, and then mix thoroughly. Repeat if necessary. Drop one tablespoonful of white batter into each muffin cup. Smooth flat with a knife. Drop one tablespoonful of green batter gently on top of white, being careful not to mix the two colors together. Smooth out the green with a separate knife. On top of the green batter, gently drop one tablespoonful of white batter. Smooth flat with a knife.
Muffin cups should be 3/4 full. Place cupcakes in oven and bake for 20-25 minutes until tops are a little golden brown or an inserted toothpick comes out dry. Cool on wire racks and cool completely before frosting. 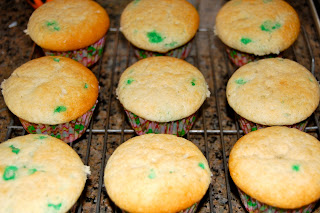 Seven Minute Peppermint Frosting
( Just so you know, I definitely made adaptations to this frosting recipe which I suggest you DO NOT follow because they don’t work. Below is the exact recipe as it is in the book. I’ll share my mistakes at the end.)

Mix sugar, cream of tartar, salt, egg whites, and water in a pot or bowl over simmering water. Beat steadily over low heat with a rotary or electric hand beater until the frosting stands in peaks, about 5-7 minutes, no more. Remove from heat and continue to beat until thick enough to spread. Add the peppermint extract before spreading.

I really wanted some peppermint white chocolate frosting on these babies. Yeah,… no. My frosting definitely didn’t turn out the way I had expected it to. It may have been the 1 cup of white chocolate morsels I put in the pan over the heat with the other ingredients or it may have been that I left out ½ cup of sugar only because I ran out (duh! who runs out of sugar during a 365 day baking challenge?!). I also thought that not having that ½ cup of sugar wasn’t going to make that much of a difference because I had added the chips and thought the sugar should be decreased anyway. What a mess. I cannot tell you how frustrated I was becoming. At the end of 5 minutes over the heat, the frosting was runny, and not peaking as it should have been. It wasn’t anywhere close. So, do I add powdered sugar, flour, or cornstarch to thicken it? I had NO idea. The powdered sugar seemed the most logical, but I really didn’t think I needed to add anymore sweetness and was nervous about that powdered sugary taste. The flour and cornstarch? Looking at other frosting recipes, I didn’t see one that contained either of those. So, the most logical thing to me? Add a WHOLE container of Betty Crocker White Whipped Frosting!! WOO HOO!! No, I’m not saying woo hoo because it worked (remember, we people from New England can be very sarcastic at times). My frosting adaptations can be labeled as another 365 day mishap (how many am I up to now?). Oh well, I guess if you don’t make mistakes, you can’t learn from them. I’m just extremely disappointed what I didn’t learn from this was how to fix the frosting. Adding a can of ready-made frosting didn’t do it, but I have to admit, it did make it a little less runny. You can see from the picture that the frosting is flat on top of the cupcake. Oh well, c’est la vie! They still tasted good.
The inside of the cupcakes were cool, but they didn’t turn out the way I had them pictured in my head. Yes, I am my worst critic and a perfectionist, I suppose. My kids liked them and the feedback from my daughter’s party was good. I’ll get there. It’s just going to take practice and patience.
My rating system is on a scale of 1-4 with four being knock-your-socks-off delicious. These St. Patrick’s Day cupcakes were given a 3 rolling pin rating despite the flat frosting. It still tasted good, more pepperminty than chocolaty. So, save yourself some trouble, and use the recipe for the frosting as I posted it or… you can always use the canned kind, too.
Happy baking! 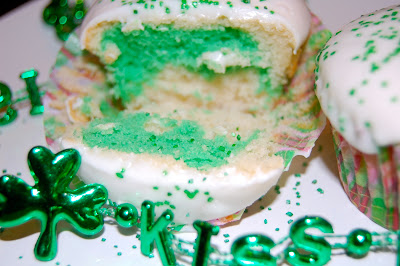